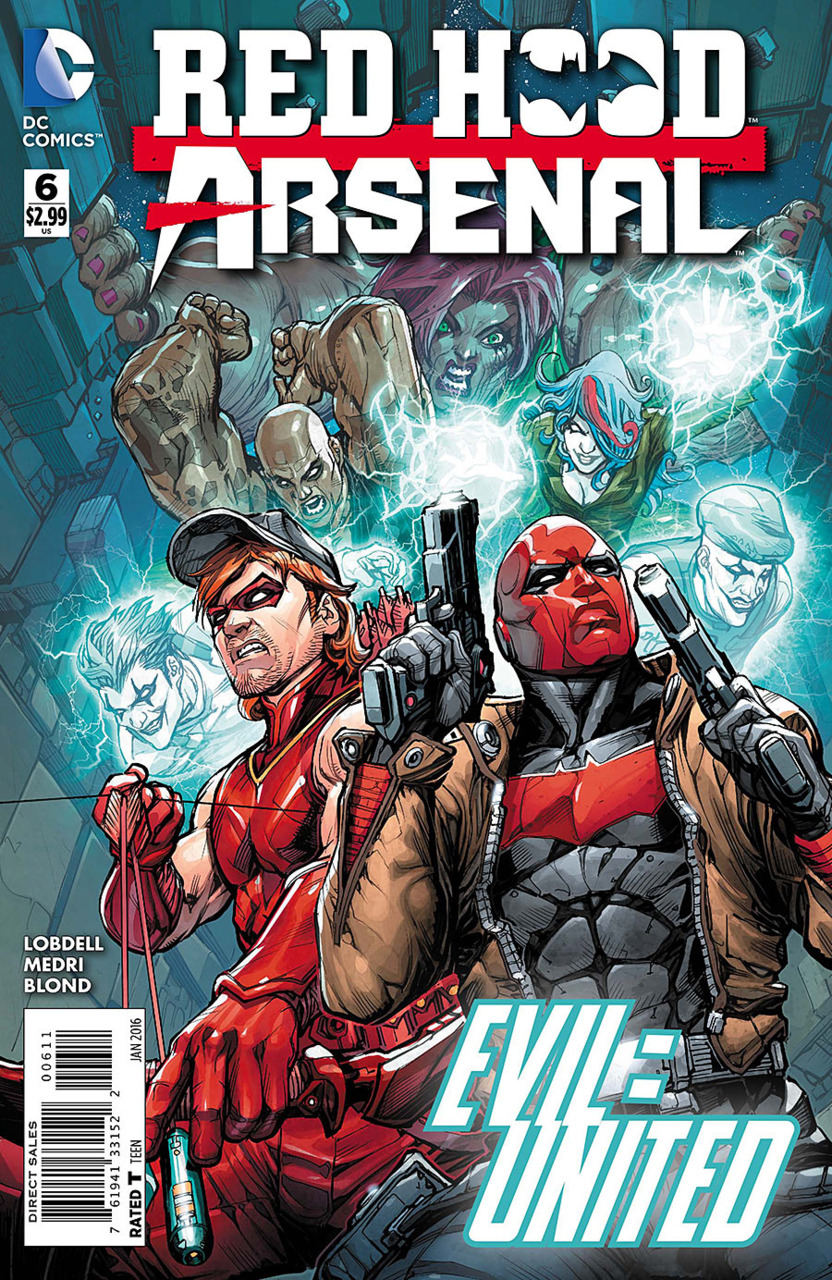 On the plane out of Gotham, Jason tries to reach Roy with no luck. He is hoping that Roy is not drinking again when he is interrupted in his thoughts. A woman looks out the window and starts screaming. Joker’s Daughter is on the wing with a chainsaw. Jason sees who it is and starts to head to the exit. Since his helmet and guns are in the plane’s hold he has to improvise. Jason kicks the door open and engages Joker’s Daughter on the wing. To avoid another plane, the plane veers knocking Joker’s Daughter off her feet. Jason grabs her with one hand and grabs the chainsaw embedded in the wing with his other hand. To thank him the girl pulls her gun and tells Jason that Roy is dead and he will be next.

Back at the mall, Suzie takes a photo of the body of Roy and picks up his quiver and turns her back. We suddenly see a red arrow strike the back of Suzie’s neck and she goes down. Roy is alive and feels the back of his head. He was actually shot with a paintball filled with body parts to make it look like he was dead. Unfortunately Roy cannot find his bow but that does not stop him.

Back on the wing of the plane, Joker’s Daughter fires at Jason but her heart does not appear to be in it. She is either missing intentionally or her aim is bad. The girl reminds Jason of himself when he came back from the dead. The plane touches down and Jason loses his grip on the girl’s hand and she falls off but she is not killed instead she just bounds away daring Jason to catch her.

At the mall, Roy is attacked by Palette. To retaliate, Roy rams an arrow into Palette’s foot and stabs him in his chest with another arrow. Roy seems to feel some remorse.  He wanders if his is maturing or is whatever grabbed his brain, a reference to the Titans Hunt book.

Joker’s Daughter arrives without Red Hood. Sera Fina and the mimes confront her. She orders the mimes to kill the girl. The Daughter asks Fina why she wants Red Hood and Arsenal dead. Fina admits that she was putting together the Hero Manifesto to offer super powered hired help. She explains the Battleworth hired Red Hood and Arsenal to clean up her messes and then the two went public with the Rent a Bat. Fina can control pockets of reality and she plans to make Joker’s Daughter sane just so she will be driven mad by her prior actions. Red Hood shows up shooting the mines and Arsenal arrives and throws an arrow into Fina eliminating all of the remaining threats.

Joker’s Daughter never wanted to join the Hero Manifesto, she just wanted to get the attention of Red Hood and Arsenal. Red Hood decides to ship the Hero Manifesto out of Gotham by sea. This will give them time to think about their team. Joker’s Daughter asks why they do not just kill the villains and Arsenal wonders the same thing as they were not against violence in the past. Red Hood reveals that they now have to set an example for their newest employee, Joker’s Daughter with full dental. The one condition is for her to not kill. She agrees but she has her own condition, if she fails she asks Jason to put her down once and for all. In the end Jason gets a text referencing the Robin War which will be next month’s issue.

This issue was entertaining. I was a little concerned when I saw the introduction of Joker’s Daughter in the end of last issue and other than the awkwardness of referring to her name in my synopsis I kind of enjoyed her. It is interesting to see her through the eyes of Jason Todd. He sees himself in her and that may not be far from the truth. I am interested in seeing how this arraignment will pan out with full dental.