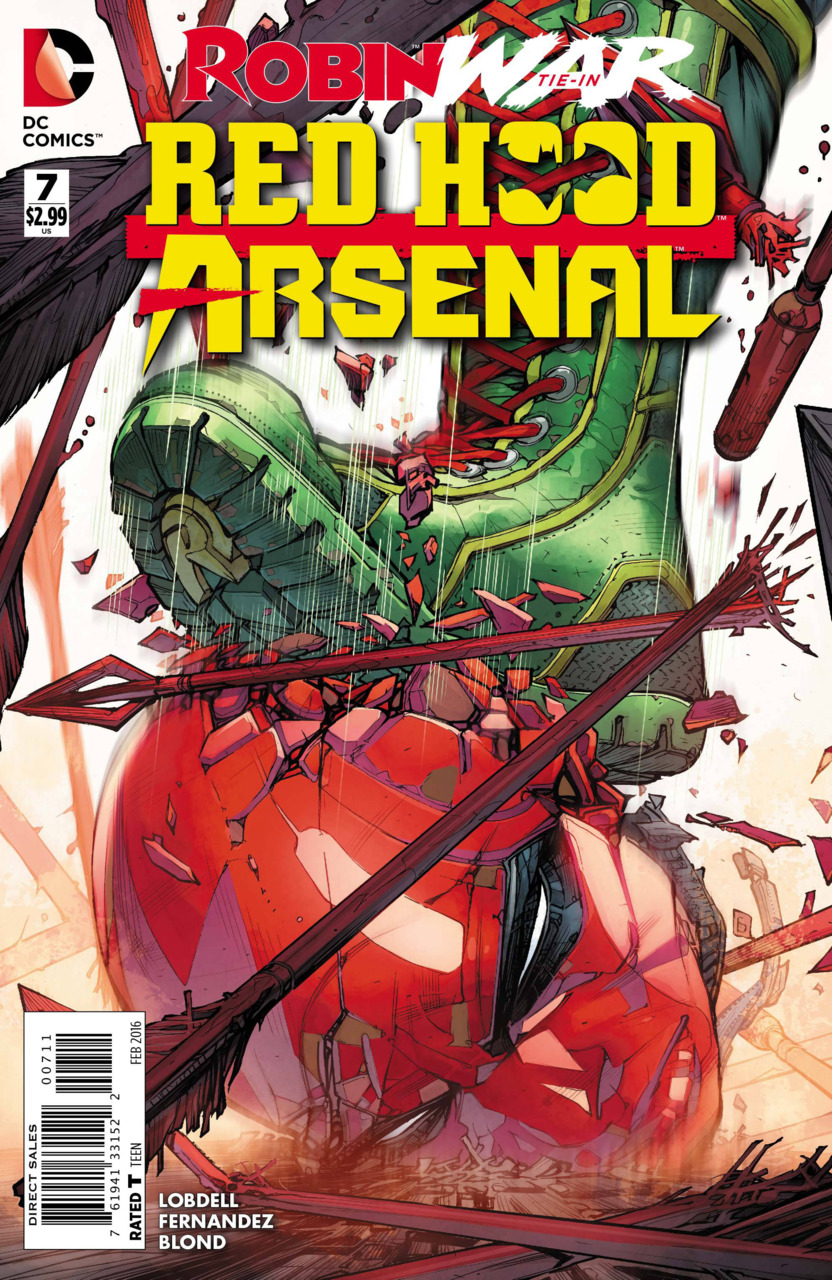 This tie in issue to the Robin War story takes place during the Robin War #1 issue. I have not read that issue as I wanted to evaluate this story on its own.

“All’s Fair in Love and Robin War” opens with Red Hood and Arsenal in two different locations in Gotham communicating via Arsenal’s holographic arrow. Roy wants to help Jason as he is dealing with the events of the Robin War. Jason does not want Roy involved, he even states that Roy would make the situation worse. Instead Jason wants Roy to babysit Joker’s Daughter. Roy does not want this assignment but he will only care because for whatever reason Jason cares about what happens to Joker’s Daughter (JD). JD wants to go exploring in Gotham while Roy tells her to stop.

We cut to the Bowery where Jason is located. He is joined by Tim Drake, Red Robin. Tim has gone on recon and the two discuss the latest developments including the “Robin Laws”. The two spend the rest of the issue reminiscing about their times as Robin.

Elsewhere Roy and JD are just hanging out trying not to get into trouble. Roy gets a call on his phone. Someone from the fairgrounds wants to hire Rent-A-Bat. Roy and JD immediately head out.

Jason muses about when he first rose from the dead and saw that he was replaced by Tim. Tim reveals why he eventually chose the code name of Red Robin. He was intimidated by the death of Jason so he took the name Red Robin.

Half a town away, Arsenal and JD are on their way to the fairgrounds. The two arrive as the payment clears on Paybud. Now they need to find the people they are hired to beat up. The two come across a group of people running. The two find Phosphorous Rex, Big Top and Siam. The three villains are gathering orphan boys in their early teens. Arsenal orders JD to stay put while he engages the three villains. Arsenal does fine until he deals with Big Top who basically sits on him. Roy tells JD to sic Big Top. She takes out Big Top and somehow gets a shotgun. She aims the gun at Big Top with the apparent intention of killing the thug. Arsenal responds by notching an arrow and aiming it at JD. JD admits that she wants to be brave like the Robins, she just does not think she can be. She appears to go to pull the trigger.

The scene shifts to Roy on a motorcycle with JD behind him. In Roy’s inner monologue we learn that he has grown to care for JD and he muses that is what Jason wanted to happen when he had him babysit her. JD wakes up and we learn that Roy tasered her so she would not shoot the thugs. Instead the thugs are now in the hospital in intensive care. JD says that she was not going to pull the trigger. Roy does not believe her. She insists that Red Hood’s believing in her wants her to believe in herself. Roy cuts the rope binding JD’s hands. The two are surrounded by what JD calls the Dwellers. The Dwellers are mindless sub-humans that exist in the lava beds under Gotham. They have never traveled to the surface before. The two are attacked and pulled under the street.

Jason arrives to find Roy’s melted bike but no Arsenal and Joker’s Daughter. Next issue “Harmed and Dangerous Part 1”.

This issue was alright but not terrific. I could understand what was going on without being immersed in the Robin War story line. We just get Tim and Jason talking with each other and this mission involving Roy and JD. It was interesting to hear the conversation between the two Robins. Jason even admits to have a better relationship with Tim than the other members of the Bat family. Tim does not cause Jason to throw up a little.

It was fun to see Arsenal and JD fight the three thugs but this was just a means to set up the next arc. Over all this Robin War story did not interrupt the Red Hood and Arsenal story. It just provided a transition to the new arc.

Overall, the issue was just okay.