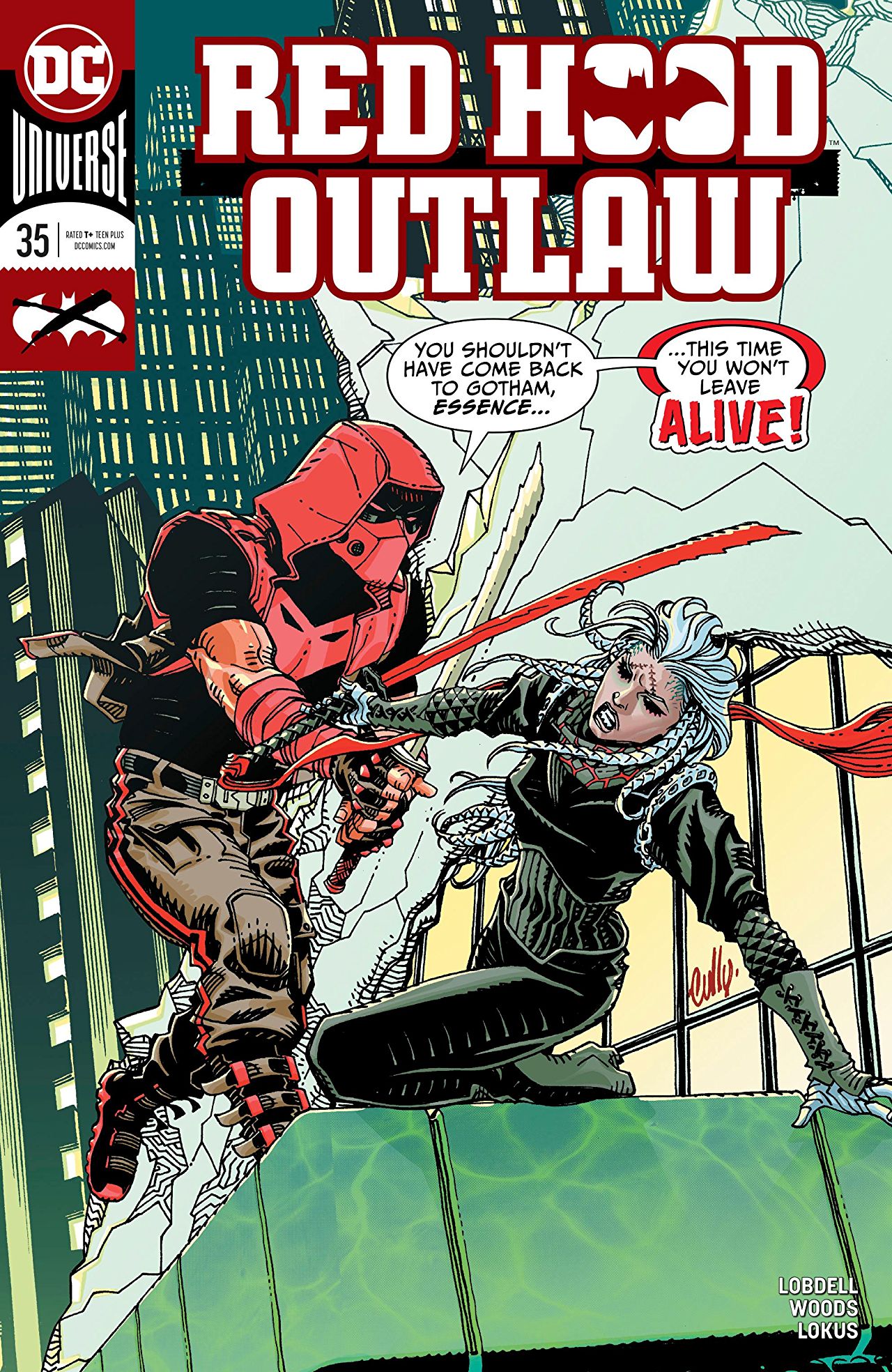 Overview: Jason grumbles like a sourpuss despite having everything he could want, because it’s not what he needs.

Synopsis (spoilers ahead): Jason sits around, cavorting with rich socialites to promote his business, all the while doing not wanting to deal with them at all and hating each and every one of them. We see him muse about his father and his struggles being a street rat, before his current flame for the past few issues, Isabel leaves him to stew in his pity party.

He eventually gets picked up by his wingman, only for both of them to start second-guessing Jason’s own involvement in Gotham, followed by Suzie Su also voicing her concerns about his recent actions in France from the last issue. Everyone seems to be really worried about where this story is going, when suddenly an assassin from All-Caste comes after him, foreshadowed in the previous issue.

What wasn’t foreshadowed is some little loophole Jason exploits to trap the assassin in her own blade, putting her in his safe before being held at gunpoint by the Penguin.

Analysis: Looking over this issue, again and again, I’m just really disappointed. Last month’s issue was a real grand-slam that it leaves this issue lacking quite a lot. Instead of a collection of scenes with their own events ranging from tragedy to success with twists and turns around, this issue just goes from anger to confusion without much actually happening. Typically, if a story is going to have only a little narrative change happening, you supplement it with character-change. Make the characters get dynamic with one another, explore new ideas. And to its credit, the story tries that. But it doesn’t earn any of it. Wingman, who was obsessed with Jason returning to Gotham for several issues, and without saying more than a single line or two, just up and says “maybe I was wrong” about bringing Jason there. Such a revelation would normally come attached to some evidence. Maybe Jason is doing something different or his behavior is, but no, he just thinks “maybe you’re bigger than Gotham now” and that vague statement is all he has to say.

All this second guessing and griping comes across as Lobdell trying to back out of the story-arc he wrote himself into. As if he didn’t know where to go next, so he just wants to scrap it all and move on. Jason is mulling over a supposed relationship with his father, even though he spent a million issues before having no idea what his father was like before suddenly reading letters left to him. This sudden fondness for his father, especially with how personal his fondness is, feels wrong. Yeah, it makes a kind of sense that he’d get emotional over the letters, the feeling that this was a life he could never get, but he’s musing about promises his father made him like they held any value to him.

His anger towards the socialites also feels incredibly petty. Like, yeah it makes sense he’d be feeling anger towards these people, but this much anger? The art in this issue is making Jason look like he’s going to turn a machinegun on all them, just because they are snooty rich elites. If I were in the writing room with Lobdell, I’d try to get him to actually explore his relationship with a few rich people. Or just explore his relationship with Isabel more. She doesn’t feel like a romantic partner. She feels like a summer fling he’s having in January. She’s sympathetic and caring and does everything a sad emo boy wants, but doesn’t seem to actually want anything out of the relationship herself. She doesn’t seem to have any motivations beyond “be sweet and nice to Jason and look pretty”.

Not to mention, Jason completely forgets about her when his assassin/ex-flame shows up to kill him. Now all of a sudden all he can think about is how much sex they obviously had behind the scenes. The fight feels like it’s from another genre entirely. Jason never uses a sword ever except when it involves this weird All-Caste group and the All-Blade. Suddenly they’re throwing magic energy blasts like this is a Shonen Manga or something. The twist in the end that the Assassin’s “Blood Blade” has a loophole in it that only lets it be used on the guilty would be a fun twist, if it wasn’t explained to use in the last five seconds of the fight. Lobdell forgets that most of us didn’t actually read his original New 52 run, so maybe instead of focusing all this effort into flashbacks about your dad promising you Gotham, maybe spend that time expositing more about how the All-Caste works?

Maybe instead of Jason brooding over the socialites, he’s feeling guilty over his feelings towards an old ex while going to a party with his current girlfriend. Use this to leave clues about how the Blood Blade works. Then, when its revealed that he can’t be hurt by the blade because he’s not guilty, a stupid rule considering Jason literally attempted murder in this very story run and if its some kind of Ghost-Rider Penance Stare thing where the victim needs to see themselves as guilty for it to work, that requires a lot more set up than it has.

The mechanics of the fight outside of the twist are also ill-defined. We see energy blasts and fireballs being thrown around, but we don’t really get what any of it means. Why are they expected to hurt? This isn’t a fantasy story. This is a gritty Gotham crime drama about usurping crimelords and destabilizing mafioso. The genre shift is not healthy to keep your readers invested.

Final Thoughts: I’m worried Lobdell is getting bored with writing Jason and is just throwing whatever he can get away with at this point. Hopefully, Penguin brings with him his usual wit next issue.