Reign of the Robins: Part 1 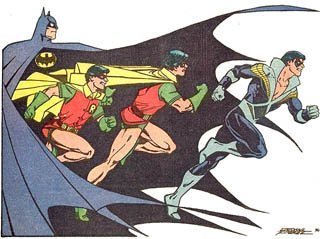 This winter the 70th anniversary of Captain America, Steve Rogers’ debut was celebrated. In March though, another 70th anniversary was marked, though not to the fanfare that it should have. Detective Comics issue # 38, with an April cover date, hit the stands with a brand new character bursting out of a frame being held up by a beaming with pride Batman. Dubbed on the cover as “the sensational character find of 1940” Robin, The Boy Wonder, aka Dick Grayson, would get his origin story in that issue, as well as appearing alongside Bruce swinging on the cover of next month’s Batman issue 1, as well as being featured alongside the World’s Finest team of Superman and Batman on covers of World’s Finest Comics issue after issue.

And a legend was born…

70 years later, Robin is now what comic fans would call a “legacy” character as several different people, including two Girl Wonders, though one being in a possible future (The Dark Knight Returns’ Carrie Kelly), and yet it seems Dick Grayson and those who would follow him in the Robin name, well at least the 5 in current DC continuities, have been making quite an impression in the Bat-Universe and the DC Universe as a whole; Dick as Batman is at the helm of the Justice League, Tim Wayne nee Drake is doing his thing as Red Robin and the guy currently running the Wayne Foundation, Stephanie is coming into her own as the super-heroine Batgirl, Damian Wayne is now a member of the Teen Titans, and Jason Todd…well, he may still have a role to play in the DC Universe yet, despite failures as being a Dick Grayson Batman villain.

Coming installments of this feature here at The Batman Universe will take a look at the current state of each of the aforementioned five characters and their roles in the larger picture of the DC Universe at the current time.

But first, a brief history of Robin through today:

Created during the Golden Age as a conduit of sorts for many of Batman’s younger readers; a chance to live in Batman’s world vicariously through this youngster sidekick to the adult hero. In the ensuing years this would be a trope in the world of comic book characters, including Captain America’s debut issue where young Bucky Barnes debuts alongside Cap. Dick Grayson would become popular enough that roughly the tail end of the Golden Age would see Robin, The Boy Wonder appear in solo adventures for the first time. Star Spangled Comics # 65, cover date Jan 1947. Interestingly enough, the book’s title is taken from the star of the title, the Star-Spangled Kid, which took the Robin trope and reversed it! The Kid was the main hero of his adventures and he had an adult sidekick.

Dick’s solo adventures ran through the end of the book’s run with issue 130 in 1952, and he is the cover character through issue 95 when western themed hero Tomahawk takes over, though Bruce shares the covers from #88-94 and the Dynamic Duo do get billing, and Robin continues to be inserted on the cover image in roughly the same insert spot used in comic books for generations through issue 108 in 1950. Strangely the insert is removed for #109, but “Robin the Boy Wonder” would remain until the next to last issue.

Perhaps another clue to how this title was changing with the tastes of the end of the Golden Age is that after issue 130, the book got renamed Star Spangled War Stories, which incidentally ran for 204 issues during the Silver and Bronze Age. Robin, Dick Grayson, of course would continue his adventures with Batman during the transition into the Silver Age in Batman’s three titles, until of course Brave and the Bold # 64 which was the debut of The Teen Titans. Dick would continue to have adventures with the Titans of course throughout that team’s history as both Robin and Nightwing. Also during the Bronze Age Robin of Earth-2, still Dick Grayson, would make appearances as a member of Earth-2’s Justice Society of America and All Star Squadron. Earth-2 allowed its heroes to grow up, and even retire and eventually die as in the case of Bruce Wayne of Earth-2, the Earth-2 Robin kept the persona going, though with a nifty costume change, following Bruce’s retirement and was active until dying during Crisis on Infinite Earths. While the Earth-2 Dick Grayson never relinquished the name Robin, Earth-1’s did when he became Nightwing and Jason Todd was brought into the Robin domino mask and pixie boots. Depending on which side of the Crisis you read, Todd either had virtually the same darn origin as Dick Grayson, or he was a street urchin caught trying to steal the wheels off of the Batmobile. Well, Crisis happens, Jason is still very much Robin afterward, and is promptly blown up real good in Death of The Family. In between Jason’s retooled origin and passing, Carrie Kelly should be mentioned. Saved by Batman from being raped, she tries to return the favor by being the returning Batman’s new sidekick. Ironically written about 3 years before fans voted to kill Jason Todd off, the story goes that it is Todd’s death that caused Bruce’s retirement. Moving on, we get to Tim Drake. Deducing that Bruce Wayne and Dick Grayson are, or were in Dick Grayson’s part, Batman & Robin, and deciding that Batman needed a Robin, Tim first sought to get Grayson back in the role of Robin. When that plan failed, Tim took it upon himself to be the new Robin! Thus began the legend of the character many feel is the superior of all the Robins. And the only Robin to have his own solo title which ran for 183 issues from November 1993 to April 2009, a title canceled only due to a major Bat-Family shakeup and the now Tim Wayne becoming a new hero named Red Robin, and his adventures continue in that new Red Robin title. Much like Dick Grayson, Drake became a major player in the DC Universe as a whole. A founding member, alongside Superboy and Impulse, of Young Justice which ran from 1998 through 2003 and would go on to lead the Teen Titans during much of the 2000s. Drake’s time as Robin though was interrupted by the heroine formerly known as Spoiler taking over as Drake was forbidden to be Robin by his father. Unfortunately Stephanie Brown set off the events of War Games, which led to her seemingly dying. Tim Drake reluctantly returned to the role after her “death.” This should be explained when we get to her part. And finally we have Bruce’s little bastard. Literally as Grant Morrison took the child Talia al Ghul had with Bruce in a 1987 graphic novel called Son of The Demon which was placed afterward as an Elseworlds story, and brought him into current DC continuity in his first Batman story arc, Batman and Son. Damian Wayne would soon be plopped right into the Bat-Family’s lap at the end of Batman R.I.P. and reluctantly Dick Grayson takes him as Robin to his Batman.

And that takes us to today.

Next time, a look at Dick Grayson’s, current state as Batman.