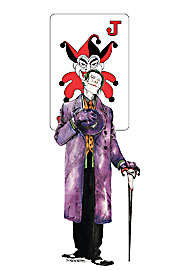 My immediate thoughts after seeing the cover to this month’s Batman: Streets of Gotham were, “What the heck is the Joker doing there?” Now of course that’s not a bad thing by any means, but I was still caught a little off guard since he has not played any role in "The House of Hush" up to this point. So I had high hopes for this issue and was excited to see how Paul Dini would incorporate the psychopathic clown into the current story. A quick flip to the back, to see the page count, put a smile on my face and I was ready to tear through this one.

From the opening page, we see that Dr. Death posed little threat to Hush and his newly assembled team, and they have the situation under control. After giving in to Hush, the mad scientist agrees to help them with their cause. As the group walks through Dr. Death’s lair, Hush begins to make conversation with Anthony Marchetti. From here the story gets sidetracked to delve into Marchetti’s past and his first encounter with the Joker when he was a young boy. We learn that Joker had killed Marchetti’s uncle Sal, who was the most powerful crime boss in Gotham at the time. This moment had a profound impact on Marchetti’s life and by my interpretation, had somewhat of a traumatizing effect on him. After hearing this, Hush reassures him that they will get back at the Joker by taking away the only thing that gives his life meaning, Batman.

Although Hush already knows that Bruce Wayne is Batman, he suggests to the others that taking out Wayne could be very helpful in destroying Batman, therefore almost killing two birds with one stone. How will he go about this plan? By becoming Bruce Wayne again, since the employees of Wayne Enterprises still believe him to be the real Bruce. The issue closes out with Batman and Catwoman snooping around the Busker’s Club, an old, abandoned club that was once the gathering place for the great entertainers of Gotham City. Batman pauses to look over one particular photo of Thomas Wayne having dinner with a young John Zatara, thinking about how Alfred had mentioned their relationship to him before. As Batman and Catwoman go about their business, Bedbug is spying on them from afar.

There’s really not too much to say about the art, as I’ve come to expect nothing short of amazing from Dustin Nguyen in this series. I should also add that the cover was a major topic of discussion at my comic shop this week, so kudos to Nguyen on that as well. I felt that the Joker flashback was very dark, and it gave that uneasy feeling about Gotham I get when reading a good Batman story, where danger is always seems to be just around that corner.

The end is approaching for "The House of Hush," and we still are yet to see any real action. This is not necessarily a bad thing, as the slow pace is really allowing for things to develop here. Every single panel is building up to the finale. I like how Dini has made sure to acknowledge the motivations for each and every player involved in the scheme to take out Bruce. It shows that even with the writing problems that have plagued the book up to this point, this final piece is indeed a well thought out story. Of course the buildup can be detrimental if the conclusion flops, as it will fall even harder, but I have high hopes since I believe that this is the story Dini wanted to tell when he signed onto this series.