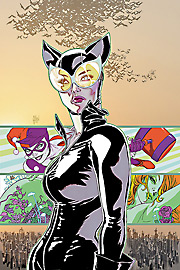 I’m going to start this review with a confession: I pretty much gave up on this series a couple months ago. When Gotham City Sirens first began I was sold on it by the promise of Paul Dini’s writing and Guillem March’s art. If you’re a Batman fan you should already know Dini’s credentials, and I’d be lying if I said I wasn’t enticed by March’s mastery of the art of cheesecake (and beefcake for that matter, the man always did serve up equal opportunity fan service). But when it came time for the series to begin, it did not prove to be one of Dini’s better works, and it struggled to find a real purpose in the greater Batman Universe. In spite of these problems I stuck with it, but my interest finally waned when it became increasingly apparent that Dini and March were not going to continue working on the series. So you’ll have to forgive me, I’m rejoining this series midway through a story arc and I may miss a few details.

In this issue we find Catwoman caught under an illusion, generated by a villain intent on finding out Batman’s true identity. Harley Quinn and Poison Ivy are joined by Zatanna and Talia Al Ghul in their attempt to find Catwoman, which would be fine if the latter two weren’t hiding their own vested interests in keeping Batman’s identity secret. Peter Calloway’s writing on this issue is all right. There are no outstanding problems, but there’s nothing all that exciting. Most of the drama and tension is tied up in the group’s infighting, not in their race to save their comrade. Andres Guinaldo and Walden Wong also do a fine job with the issue’s art, though they’re attempts at explosions are a little lackluster. Honestly I couldn’t tell if the stalactites were falling from explosions or if they were just disintegrating and falling apart, both of which are possible considering the number of magic users involved in this story. There are also some hints that we’re going to see another Zatanna induced mind wipe, so it looks like no one has learned anything since Identity Crisis. Fantastic.

Probably my biggest complaint about this issue is the cattiness of the dialogue. Yes, we get it, these women do not get along well. There’s only so much that can be mined out of petty snipes and biting comebacks before you start to wonder how these characters manage to function together at all. Which sort of gets to the heart of the problem with this series, why do Catwoman, Harley Quinn, and Poison Ivy stick together? Harley and Ivy make sense because of their history together, but Catwoman’s ability to straddle the line between criminal and antihero is severely undercut by hanging around with the two of them. Conversely, I don’t see how Harley and Ivy can trust Catwoman or believe that she isn’t hiding things from them. Paul Dini tried to resolve this in the second issue of the series, but I felt the answer he gave was forced and I never understood how Harley and Ivy bought it. At this point, the only thing I see that holds this group together is Harley Quinn’s unwavering desire to keep everyone together, which is still a pretty weak reason. On the upside, it does make Harley all the more likable and I can’t find fault with that.

There’s nothing really terrible about this issue, but there’s not a lot to recommend. If you’re already reading the series you’ll find it pleasant enough, otherwise you can probably pass on it.