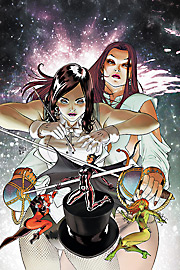 Since my last review of Gotham City Sirens, I’ve gone back and read the issues that I had missed before I started writing for this site. Much to my surprise, I actually found myself liking the current story arc a lot more than I had originally. This series still has problems, but last month’s rescue mission makes a lot more sense after reading the events leading up to it.

The issue opens with Zatanna wrestling with the mission Talia Al Ghul has presented to her: erasing Bruce Wayne from Catwoman’s memories. While she is deeply conflicted, she decides to go through with it after prioritizing Bruce’s safety and receiving some advice from her deceased father. This scene is actually very touching, though it left a bitter taste in my mouth because I hated watching Zatarra endorse another Zatanna induced mind wipe (fair warning, I’m not crazy about Identity Crisis). Meanwhile, Catwoman and Poison Ivy are at each other’s throats (while Harley Quinn plays mediator) over the revelation that Catwoman has willingly withheld the real identity of Batman. This is soon interrupted when Zatanna initiates her plan by removing Ivy and Harley from their apartment and binding in Catwoman in magic chains. I can’t really reveal much beyond this point without spoiling the ending, but if you’ve been itching for a four-way fight between Talia Al Ghul, Zatanna, Poison Ivy, and Harley Quinn, I think the future will be very rewarding to you.

Peter Calloway’s writing has vastly improved over the last issue. Even though there are still a lot of characters fighting, it doesn’t feel like the cattiness that made last month’s chapter such a slog to get through. And while I don’t like that he used Zatanna’s ability to mind wipe as a plot point in the first place, I did like how he resolved the story. This series will probably continue to have limited appeal, but I have a new found sense of enthusiasm for it.

I’m always happy to see Jeremy Haun on artist duties, though this time I felt that his facial expressions fell a little flat. For an issue that is dominated by flared tempers and revelations of betrayal, no one really looks all that worked up about it. This is averted though in my favorite scene of the issue, where Harley desperately tries to convince Poison Ivy to help her save Catwoman. Harley is animated and expressive while Ivy shifts from icy defiance to surprise to pleased determination. There are a few other bright spots too, like in Catwoman’s memory sequences where the panel layouts bend to create Batman’s profile. Also good: Zatanna’s apocalyptic vision of Batman’s downfall, which features all sorts of fun monsters (and an abundance of werewolves). This isn’t Haun’s best work, but it’s nothing to be ashamed of.

While this is an improvement from last time, I don’t think I can give a bump up to the next whole batarang.