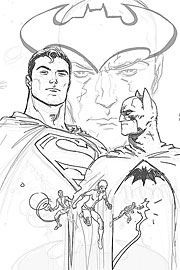 Well, Superman/Batman does not have 75 trombones, but it does have 75 issues and here is the big Anniversary issue extravaganza. Seems odd that DC does this for the 75th, but perhaps they are hedging their bets in case the title doesn’t make it to the century mark. I mean they didn’t pull out all these stops for the 50th issue, which was a straight story.

Alright, we begin with the main course, a Paul Levitz written and Jerry Ordway drawn tale called Resurrection. And despite the title, it has nothing at all to do with the story Levitz and Ordway had been telling in the recent stories. This story though, which co-stars the Legion of Superheroes, gives the book it’s cover, beautifully done by Frank Quietly and Van Staples.

The story begins in the future with a Luthor clone of some type going crazy and several of the Legionnaires have to contain him. The clone takes a time bubble and transports his way to 2010 and has a dust up with Superman. This clone apparently is laced with Kryptonite so he does some damage to Superman whom is rescued by the Legion and taken to the Batcave to heal. We get a brief scene of Luthor himself feeling this happy “sense” that something he would very much like had just occurred yet he doesn’t know why.

Batman of course is very distrusting of all things Legion and bickers with Brainiac 5 about how to deal with this situation, but it is decided that the Legion should go after the Luthor clone who has escaped again via a time bubble. And we see that the Luthor clone has gone all the way back into the past and is in Smallville and is battling Superboy. The Legion ends up saving the day and that is that!

Eh, not a bad story, but it does seem more like a Legion story than a straight up Superman/Batman tale. And granted the Legion is whom Levitz is probably mostly associated with in terms of writing chores and Superman does play a huge role in the Legion mythology, but I’d rather not have the meat of an “Anniversary” issue read like Superman & Batman are guest stars in the story.

The rest of the issue is filled with a bunch of two and one page stories;

It’s A Bat… by Steven T. Seagle and Teddy Kristiansen which is a Fourth Wall breaking story of Seagle being asked to do this exact two page back up. This is supposed to be a parody of something, of what I’m not sure. I know filmmaker Gary Weis did a short like this for Saturday Night Live, but I doubt that 30 year old short was on Seagle’s mind.

Brother’s In Arms by Billy Tucci which has a nice little comic fan twist to it.

Friendly Advice, written by J.T. Krul and drawn by Francis Manapul that deals with Tim Drake’s kissing Wonder Girl (Cassie Sandmark) who was Conner Kent’s girl friend at the time of Conner’s death in Infinite Crisis. One half of the page is Tim hashing it out with Dick Grayson (as Red Robin and Batman respectively) and Conner asking Clark what would happen if hypothetically Bruce Wayne kissed Lois Lane.

Night And Day a Michael Green and Mike Johnson continuation from their Lil’ Leaguers story from issues 51 and 52 of this title. First page is a sweet Shane Davis “mirror images” set of panels featuring Superman fighting Lex and Batman fighting Joker. The other is Rafael Albuquerque doing the aftermath of Lil’ Supes and Lil’ Bats’ time in our universe.

A Superheroes’ Best Friend by Duncan Rouleau which is a fun “tale of the tape” between Krypto the Superdog and Ace the Bat Hound.

Joker and Lex written by Brian Azzarello and art by Lee Bermejo, which is a rather funny Calvin and Hobbes parody with Lex Luthor as Calvin and Joker as Hobbes.

Eternal by David Finch which deals with the future where Damian Wayne is Batman and Connor Kent, is now Superman. Also Terry McGinnis gets a mention.

And finally We Can Be Heroes, written by soon to be Batman & Robin writer Peter J. Tomasi and drawn by Gene Ha which is a nice little father & son tale of comic book fandom.

Overall some are good, but it is a bunch of nice filler, not enough to bump up the total issue score though. Good issue for completist type of collectors, be it the title, the characters or the creators that worked on it.