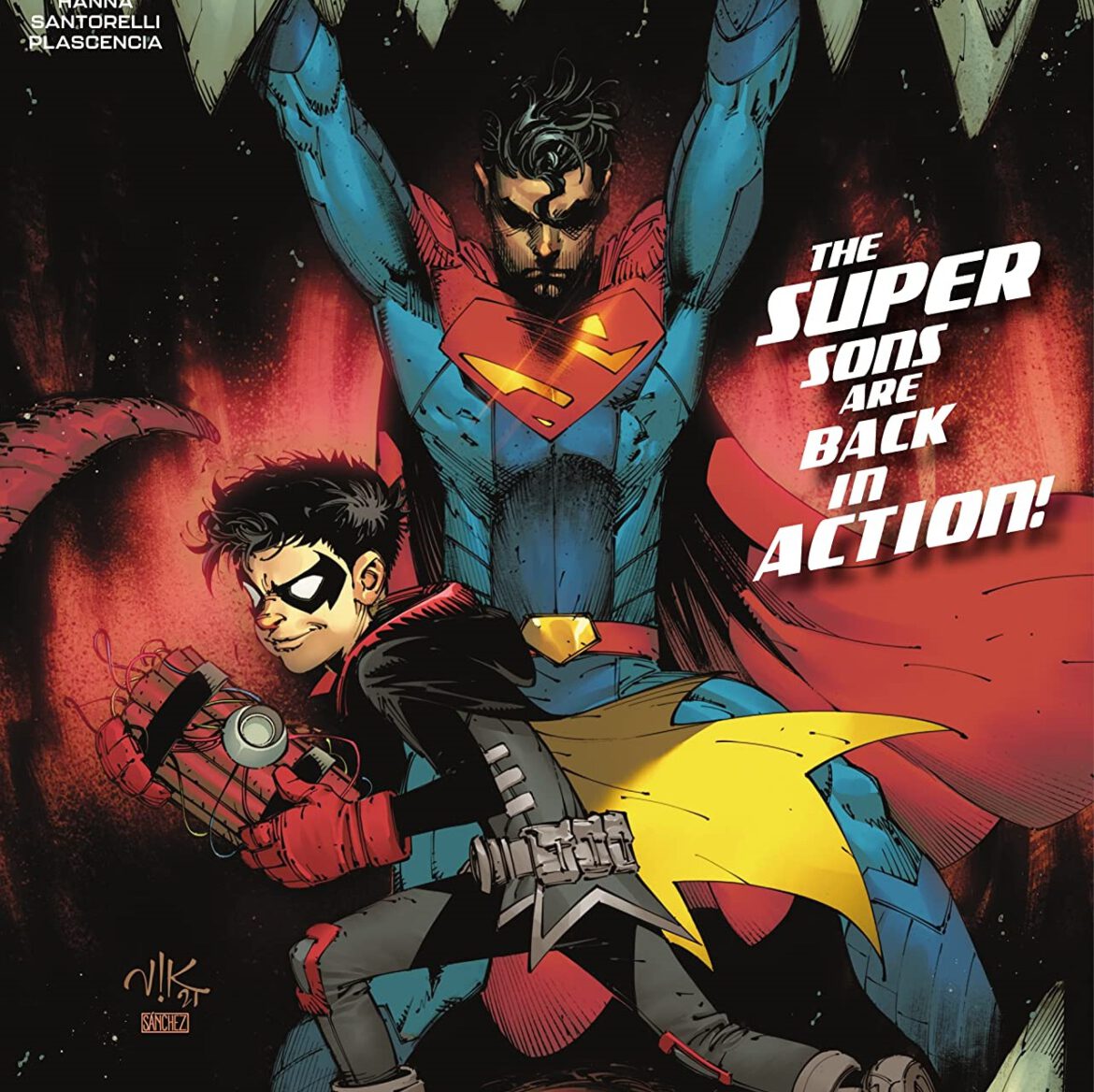 Overview: In Superman and Robin Special #1, the Super Sons return to investigate an alert at the Fortress of Solitude. They soon discover the cause and battle Nazis in the process.

Synopsis (spoilers ahead): Superman and Robin Special #1 begins at the Fortress of Solitude, as the kryptobots start their maintenance routines.  They discover a power surge in the temporal cube.

The scene shifts to Lois and Jon. Jon is watching an old show he used to watch when he was ten. Now he is eighteen and Superman in his own right. Lois admits that she is trying to block out that she and Clark missed Jon growing eight years older. Lois heads out to conduct an interview. This does not leave Jon alone as Robin (Damian Wayne) arrives. Robin has picked up that there is an alert at the Fortress of Solitude. Jon is unaware, but he finds that the crystal in his parents’ bedroom is glowing red, indicating that there is an alert. Jon changes to his suit and heads out. Robin, who borrowed the Hellbat suit, intends to join Superman in investigating the Fortress of Solitude.

At the damaged Fortress, Superman picks up the temporal cube. He provides the backstory to Robin and the readers. Robin deduces that something came through the cube and wrecked havoc on the Fortress. Robin is distracted by the Bottle City of Kandor. He thinks it is just a model, but Superman tells him that it is a miniaturized city with miniaturized inhabitants. The two are interrupted by a creature, the havoc wrecker. Superman recognizes that the creature is scared and tries to reassure it, but Robin pulls a tranquilizer gun with the intention of putting it to sleep. Superman blocks the dart, and the creature flies away. Superman snatches the gun, affirming that they will help the creature without sticking it with a needle. Damian convinces Jon to return his gun, and the two pursue the creature.

The creature jumps on Robin’s back and grabs his hair. Damian runs with Superman trying to snatch the creature off of him. The creature escapes again, and Superman notices that it is getting bigger by the second. The two hear a sound, and Superman tells Robin that it is one level below them where the alien zoo is housed. The creature, now much larger, attacks. Robin tries to tranquilize the creature again, but it seems to have no effect. The beast keeps growing. Robin fires one more dart, and the creature is finally knocked out. Superman detects a second heartbeat; the creature is pregnant. They have to get the creature back to its place of origin, or it will die, killing the baby in it. That is not their only problem.

German soldiers have also transported to the Fortress. Superman and Robin find the soldiers, and using the Hellbat suit and Kryptonian Battle Armor, the duo beat back the Nazis. While the fight is going on, the creature gives birth to its baby. The baby also starts to grow rapidly. Superman tries to convince the creature that they want to help get them back. The creature begins to trust the two humans, and they lead the creatures back to the portal.  The creature and baby step through, and the portal closes. The two heroes admit that they enjoyed hanging with each other.

Analysis: Superman and Robin Special #1 is a fun little story. For this reader who is not up to date with most of the happenings of the DC Universe, I was able to understand what was happening and enjoy it.  It contains a little exposition that helps the reader understand the history of the Temporal Cube for anyone like me who is not familiar with this artifact. The action is fun and at times comical. It is always great to see superheroes beat up on Nazis as well. The creature was also an interesting plot device as well. The reader is able to see the differences in personalities and tactics of the two protagonists. The end shows that both heroes, even though they are different, are compassionate in their own ways.

The art had a little cartoonish style to it. I am not a huge fan of this style, but it works with this story. The art matches the overall tone of the story. This is not a story detailing the dark and murderous intentions of a psychopath bent on destruction and domination. Rather, it is a story with the central mission of getting the creature and its baby back to its home, which is endearing and sweet.

This is a fun, light-hearted story that is a breath of fresh air for those tired of the darkness and heavy themes of the rest of the DC Universe.