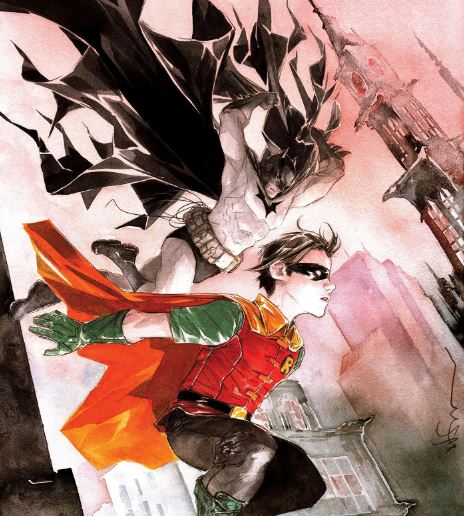 Overview: In Robin and Batman, a young Dick Grayson suits up as Robin and aids Batman in a mystery involving Killer Croc.

Editor’s Note: This collected edition includes all three issues of the miniseries Robin and Batman, which had its first issue released in November 2021 and the final issue released in January 2022. This review focuses on the story as a whole rather than the individual issues that made up the limited series.

Synopsis (spoilers ahead):  The story starts with a young Dick Grayson, who has recently been adopted by Bruce Wayne.  Dick is out in Gotham in disguise on a training mission with Batman that ends with Batman suggesting that he didn’t pass. After a long day at school, Dick is surprised to discover that Batman had Alfred destroy his training costume. Dick is angry and decides to make one himself that resembles the Robin costume and go out trailing Batman at night as he investigates a crime. The trail leads to the sewers, where Robin encounters Killer Croc. As Croc attacks, Batman intervenes. Batman forces Croc to flee but gets his ribs broken in the fight. Batman and Robin return to the Batcave, where Batman reveals he had a Robin costume made for Dick that was armored and not simple cloth. Dick is angry that Bruce has been reading his private journal. Elsewhere, Croc is revealed to have been part of Haley’s Circus in the past and recognizes the costume from the Flying Graysons.

Back at school, Dick gets into a cafeteria fight with classmates who are taunting him. Alfred comes to pick him up and talks things over with the principal. Back at the Batcave, Batman apologizes for reading Dick’s journal but tells him that they have a special mission tonight that can’t wait, even though Alfred has planned Dick’s birthday dinner.  Batman takes Robin to the Watchtower, where he meets the Justice League. While the League goes off on a mission, Robin meets the other sidekicks, who will later become the Titans. Instead of waiting patiently, Robin convinces them to covertly check the monitors to find another mission. They teleport back to Earth and stop a robbery by the Royal Flush gang, a giant robot attack by Toyman, and attempted piracy by King Shark. They teleport back to the Watchtower without any of the League noticing. Batman returns and tells Robin it is time to go. Back at the Batcave, Batman asks an ecstatic Robin for a mission debrief, and it turns out the whole thing was also a cover for Robin to figure out the weaknesses of the sidekicks in case they needed to be taken down. Alfred is furious with Bruce for not letting Dick just be a kid. Elsewhere, Croc hires the Calculator to find out more about the kid from the Flying Graysons. Calculator says the adoption records are blocked. However, he reveals he knows which school the kid goes to.

Later, Batman and Robin are following up leads on Croc. They interrogate one of his henchmen, who says Croc has been missing for weeks. During the school day at Gotham Academy, Dick starts second-guessing his Robin identity, and Croc attacks by holding the principal hostage and using the announcement system to call out Robin. Croc threatens to reveal his real name if he doesn’t show. Dick uses a scarf as a disguise and attempts to fight Croc when Batman shows up. Croc targets Batman’s broken ribs and flees, taking a limp Batman prisoner. Dick realizes Croc is headed for Haley’s Circus, so he returns to the Batcave, suits up as Robin, and pursues. Robin finds Batman chained up and hanging upside down over a pool of water. Robin attempts to free Batman, but Croc appears. A fight ensues. Croc gains the upper hand quickly and starts trying to drown Robin. Robin is able to grab a knife at the bottom of the pool and stabs Croc in the eye to knock him out. Then, Robin is able to free Batman before he drowns in the rising water. Later, at Wayne Manor, Dick enjoys a game of D&D with his friends from school and reflects that he doesn’t have to be dark like Batman; he can forge his own identity as Robin in the light.

Analysis:  This short story takes a look at the beginnings of Dick Grayson’s days as Robin. Its ground that has been explored several times in the past; however, this story does not feel repetitive as it injects fresh life into the familiar story. The big draw of this story is the exploration of the evolving and complex father-and-son dynamic between Dick and Bruce. Dick is not only learning to navigate being a crime-fighting partner to Batman but also balancing that with the grief of losing his parents, his relationship with his new adoptive father, and his life at school. Bruce is learning what it means to open up a bit and be the father figure to someone who needs him.

Instead of just exploring this at a superficial level, this story is able to really get into the nuances of this relationship and gives the reader great insight into the minds of the characters. It is quite impressive that this book is able to accomplish this over the course of three issues, whereas other stories of similar or longer length flounder with a very two-dimensional take on it. The scene where Dick gets the Robin costume is a perfect example of the two figuring out their personal boundaries and learning how to express themselves. Too many stories portray Batman being a jerk or standoffish for no discernable reason, but this story ties some of his flaws in expressing himself to his own fears and trauma. It’s a good balance between the cold, pragmatic Batman, who uses Dick’s birthday as a cover for him to gather intel on the other sidekicks, and the more emotionally aware Batman, who is learning to express his feeling properly.  Alfred serves as a strong mentor figure and subtle guide to both Bruce and Dick as they adjust to their new life.  In exploring the push and pull between Batman and Robin, the story also does a good job showing why Robin is different from Batman and perhaps why ultimately, he will go his own way as he gets older.  Again, this isn’t new ground, but it is handled with a deft touch by Lemire and Nguyen.

Family is one of the central themes of the story, and I thought it was an interesting creative choice to tie Waylon Jones’ origin to Haley’s Circus and so closely to Dick’s past. Killer Croc is envious of the perfect Grayson family while he lives a solitary existence as the shunned circus freak. It makes him a more tragic figure, adds depth to a character who might otherwise just be portrayed as a physical monster, and it also adds extra motivation for his anger towards Robin.

While I like that creative choice, I must also point out that this is the source of a couple of plot holes in this story. If Croc is able to figure out that Robin is the Grayson kid because of their shared past, then it also means that he could very easily figure out who Batman is. The book does try to get around that by saying Dick’s adoption records were sealed; however, earlier in the story, the principal of Gotham Academy mentions that Bruce adopting Dick was in the tabloids.  Another moment that didn’t quite make sense to me was when Croc attacks Gotham Academy, knocks Batman out, and then decides to capture him and flee for no apparent reason. If he really wanted to make Dick watch Batman die, he could have just done it right there, as there were no immediate threats to him. With that said, the point of this story is the exploration of the Batman and Robin/father and son dynamic, so I can look past those plot holes because of how well the former is handled.

The art is Nguyen’s signature style; those familiar with it will appreciate the way it goes between giving Gotham that smoky, ethereal quality that wraps the city in an air of mystery during street fights to the bright, grand-scale action scenes involving the Titans. Nguyen’s use of color is phenomenal as the dark shadows and backgrounds of Batman and Gotham contrasts with the bright colors highlighting Robin, which plays off the dynamic between the characters that is the focus of the story. Nguyen’s expert use of color extends to the mood of the book as well. Scenes like Robin’s return to a deserted Haley’s Circus really evoke that sense of loss and pain in the reader that the protagonist must also be feeling. The lettering is done really well, too; it could be easy for some of the typical comic book lettering to stand out negatively against a unique art style like Nguyen’s, but I found it was integrated seamlessly into the book.

Overall, this is an excellent short story on Dick Grayson’s early days as Robin. If you are a reader who enjoys exploring the development, with both the highs and tensions, of the Batman and Robin partnership, as well as the father and son dynamic between Bruce and Dick, then this book is for you.