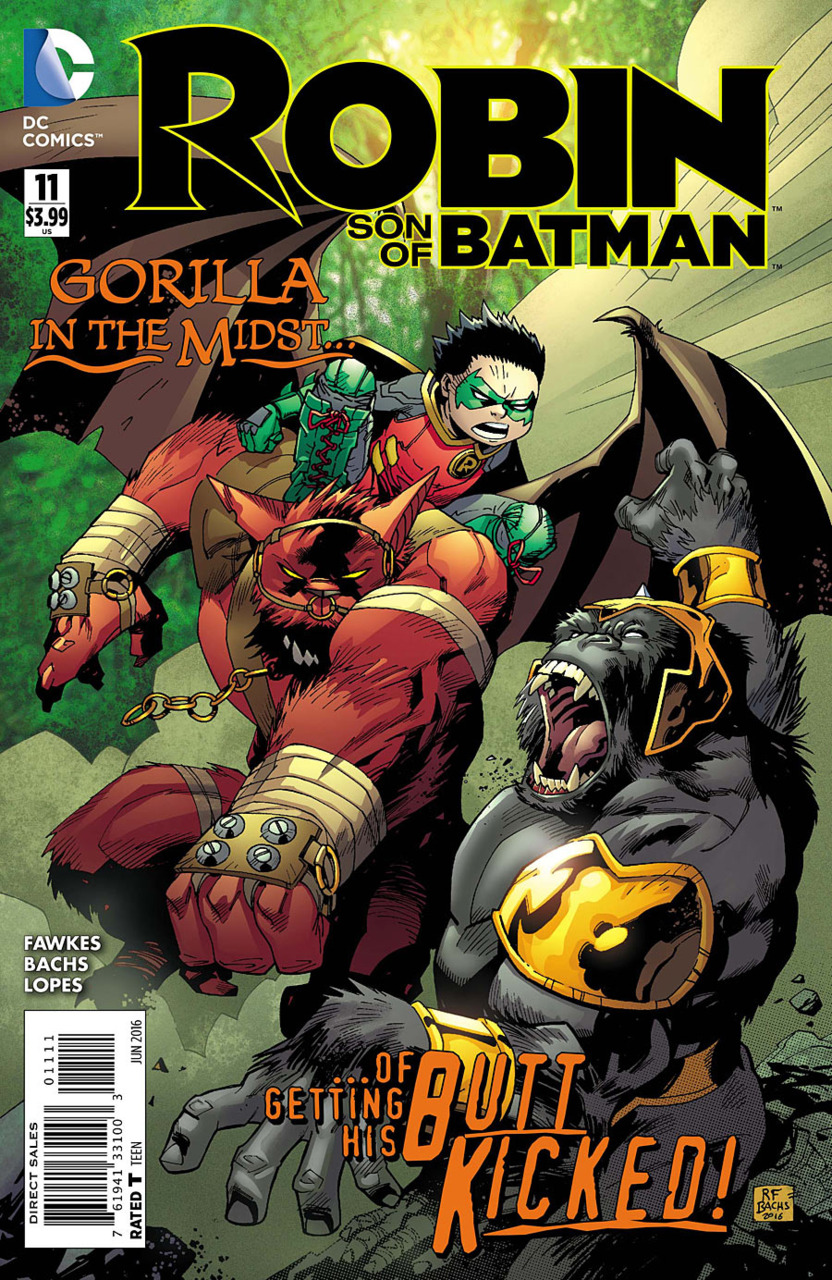 An alert opens this issue as The Flash monitors Gorilla City and notifies Batman of an incoming attack. Identified as a “mammalian megafauna,” Batman realizes that this isn’t a problem for the Justice League to take care of…but for family. Cutting to Gorilla City, Damian and Goliath are busy battling against the forces of the Lu’un Darga as they lay siege to the fabled city of talking gorillas. Realizing that the Darga must have the Helm of Solovar in their possession, Robin rushes towards the temple and tells Goliath to clear the field for him.

Coming out of the nearby jungle, Talia Al Ghul orders her assassins to assist her son as she continues to threaten Maya (whom she believes gave information to the Lu’un Darga). As the leader Suren Darga strides across the field, he orders his troops into the Temple of Penitence but is quickly intercepted by Goliath and Robin himself. Shooting flames from his glove, Suren attacks the two heroes as Goliath hurls Damian from the blast.

Battling his way through the temple, Suren Darga takes down several of the gorilla guards as he makes his way towards an alter where the Helm should lay. Robin continues to assault the Darga warriors and eventually engages with Suren himself. Getting thrown into a column, Robin is nearly defeated, but the arrival of Talia, Maya and Batman turns the tide of the battle.

Astonished to see his father alive, Suren launches another fire blast at Damian as Batman swoops in and rescues his son. As Talia engages Suren, a Darga warrior grabs the Helm of Solovar and places it on the pedestal as Maya attempts to stop him. Surging with more power than ever, Suren spurns his warriors towards the heroes as he teleports away with Maya. As Robin, Talia and Batman fight off the remaining villains, they come to realize Suren’s departure with Maya. Stating that he knows the final location the Suren has gone to, Robin tells his parents that it will take all of their cooperation in order save Maya and stop the Lu’un Darga clan.

The issue ends with Batman, Talia and Damian (atop Goliath) descending on an ancient island…that Robin states, is Dinosaur Island.

It’s so nice to have Batman and Robin back together again! And I am definitely looking forward (and hoping to see) some great conversation between Bruce and Damian in the coming issues.

With the definitive answer that parts of this story take place following the events of “Superheavy,” Batman returns in this issue and aides his son in his quest to stop the rise of the leader of the Lu’un Darga – Suren. It was nice to see Batman’s new costume in this issue (I am a huge fan of it…it looks awesome) and it was good to see that Damian’s adventures have been running concurrently alongside Bruce’s return in the main “Batman” title.

We also saw that Talia arrives in this issue and aides her son in the battle…however; she still believes that Maya was the one to betray Robin and tell the Darga about the location of the Year of Blood items. It will be interesting to see if Talia continues to help Batman and Robin or if she will eventually betray them and abandon them at some point. It will also be interesting to see what happens with Maya’s rescue…will she live? Or will Talia take out her revenge on Maya and kill her? Also, who did betray the submarine’s location? Was it Maya or could it have been someone else…crazy Talia before she was resurrected? Some unknown character hidden in the shadows? Goliath???

The art in this issue was pretty decent, but I just can’t seem to totally get on board with Ramon Bachs art…hopefully the next few issues will be able to get me to become a fan.

As for Ray Fawkes’ story, I am interested to see how the story will end…I am a little weary of Maya’s fate as I don’t believe she’s going to make it out of this series. I also hope we get some great father/son moments with Bruce and Damian.

Overall this was a decent issue…although this “Year of Blood” story seems to be dragged out a little longer than I would have liked, I am looking forward to some great sequences with Batman, Robin and Talia next issue.