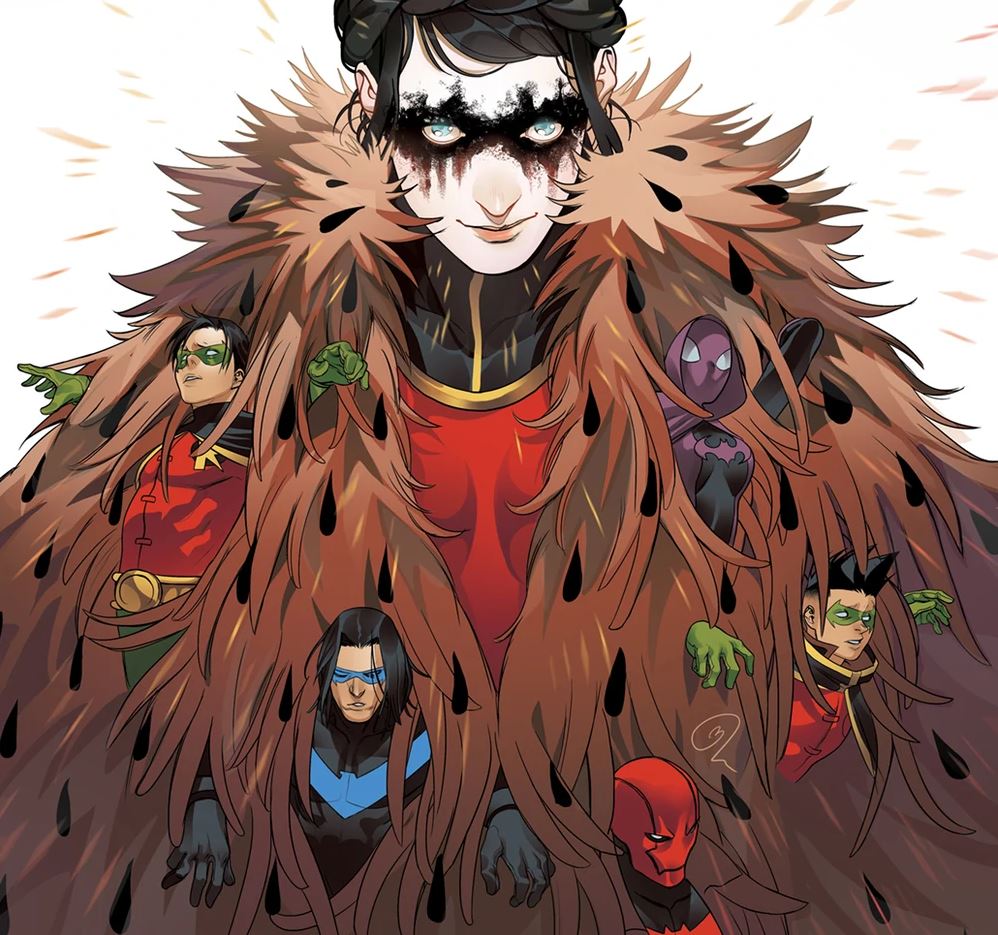 Overview: In Robins #6, Jenny Wren thinks she’s set the Robins on a lethal collision course with Batman…but has she?

Synopsis (spoilers ahead): As Robins #6 begins, Batman rushes in the Batcopter to track down Cormac Dodge, the Escape Artist, believing he must do it without his Robins.

In Bludhaven, Dick warns Steph, Damian, and Jason that watching Gauntlet Zero may ruin their relationship with Robin and Batman – but Steph, Jason, and Damian all choose to follow Tim’s plans to save him.

They learn about Batman’s fight against the Escape Artist; before he found Dick – recruiting the Artist’s sidekick, tech prodigy Anita Jean, who called herself Jenny Wren. But when Batman cornered the Artist, Cormac threatened to expose Batman – but Anita shot Cormac. Batman raged at the girl for the murder, and Anita snapped, jumping into the fire. The four Robins then see Tim’s programmed message pointing them in the right direction to find Jenny/Anita’s hideout.

Batman crashes the Batcopter into the Escape Artist’s hideout, but as he fights his way through Jenny’s hard-light holographic monsters, she ensnares his mind into her simulation, making him think the Artist is alive and has captured the Robins, driving Batman into a rage and attacking Tim disguised as the Artist. The Robins have also arrived and hold him back, just as Jenny Wren attacks with a sling. Dick manages to break through the illusion to Batman by remembering his decision to call himself Robin, connected to Jenny Wren’s Robin poem, and Batman shakes off the illusion and embraces Dick.

Jenny Wren, irate at the failure of her plan, begins to rant and rave, though Tim tries to save her, and Batman confesses his guilt over failing to save her in the past. However, Jason manages to save her from the lightning her technology attracts, then knocks her out with a headbutt.

In Blackgate, Spoiler visits the girl caught up in Jenny Wren’s Anarky gang, now free of the mind control, then vanishes, Batman-like, as the girl is set free.

Days later, at Dick’s apartment again, the Robins chat and Bruce arrives with food. They decompress, talking about the adventure, and Jason asks Bruce if he himself set up this case as Gauntlet Six to prepare them for a time when Batman might not be there anymore. Bruce doesn’t answer, watching his Robins, as a Robin bird sings outside.

Analysis: It’s been over a year since I woke up one day and found out that a comic I’d been begging for was not just a one-shot (Gotham Nights #12) but a potential reality in the Round Robin contest. Though the acrimony and turbulence of that contest, continues with us in the second year of the competition (thankfully somewhat muted, but still very present), I’m very pleased with the overall result (though if DC trades wants to release the full volume with Gotham Nights #12, since that digital-only comic is not available in print to this day, shut up and take my money please!). Tim Seeley makes sure to give each Robin a major character moment that contributes to the plot and relationships that drive the interest in the story within Robins #6. Though overall, the story is somewhat fluffy, showing the Robins pulling together, there’s enough of the unsettling and dysfunctional to remind us that it’s still a Batman Universe story, and Bruce provides just enough ambiguity in his refusal to answer Jason’s question at the end to decrease the level of sugar from “saccharine” to “pleasantly sweet.”

Artist Baldemar Rivas and colorist Romulo Fajardo Jr. make Robins #6 as consistent or more than the rest of the series. Though Rivas’ pencils still sometimes slip into the overly loose, deformed faces and anatomy that prevent the book from really harnessing the energy he brings to the layouts and action, he’s definitely proved he can do a solid action book with strong visuals and character moments with Robins. I hope to see more of him at DC soon. Fajardo’s colors are as vivid and appealing as usual, especially in the climactic fight scene.

Baldemar Rivas provides another effective horror/suspense-themed cover with all of the Robins caught in Jenny Wren’s feathery cloak – highlighting the way she’s caught all of them in her trap. David Talaski wraps up the workout variant sequence with all five Robins exercising together in a cheery yellow gym, showing the relationships and personalities of each Robin very well, from Dick’s sunny competitiveness to Damian’s cranky attempt to meditate. Both are very nice items for the series, though the nerd in me wishes a bit that Talaski had coordinated the outfits with the other workout variants – a very minor critique that really doesn’t matter given the sense of life and joy that pervades this piece.

Tim Seeley and Baldimar Rivas provide a satisfying conclusion to the Robins narrative that gives each Robin great moments and demonstrates the relationship between the Dark Knight and his squires, just as DC launches Round Robin Year 2!