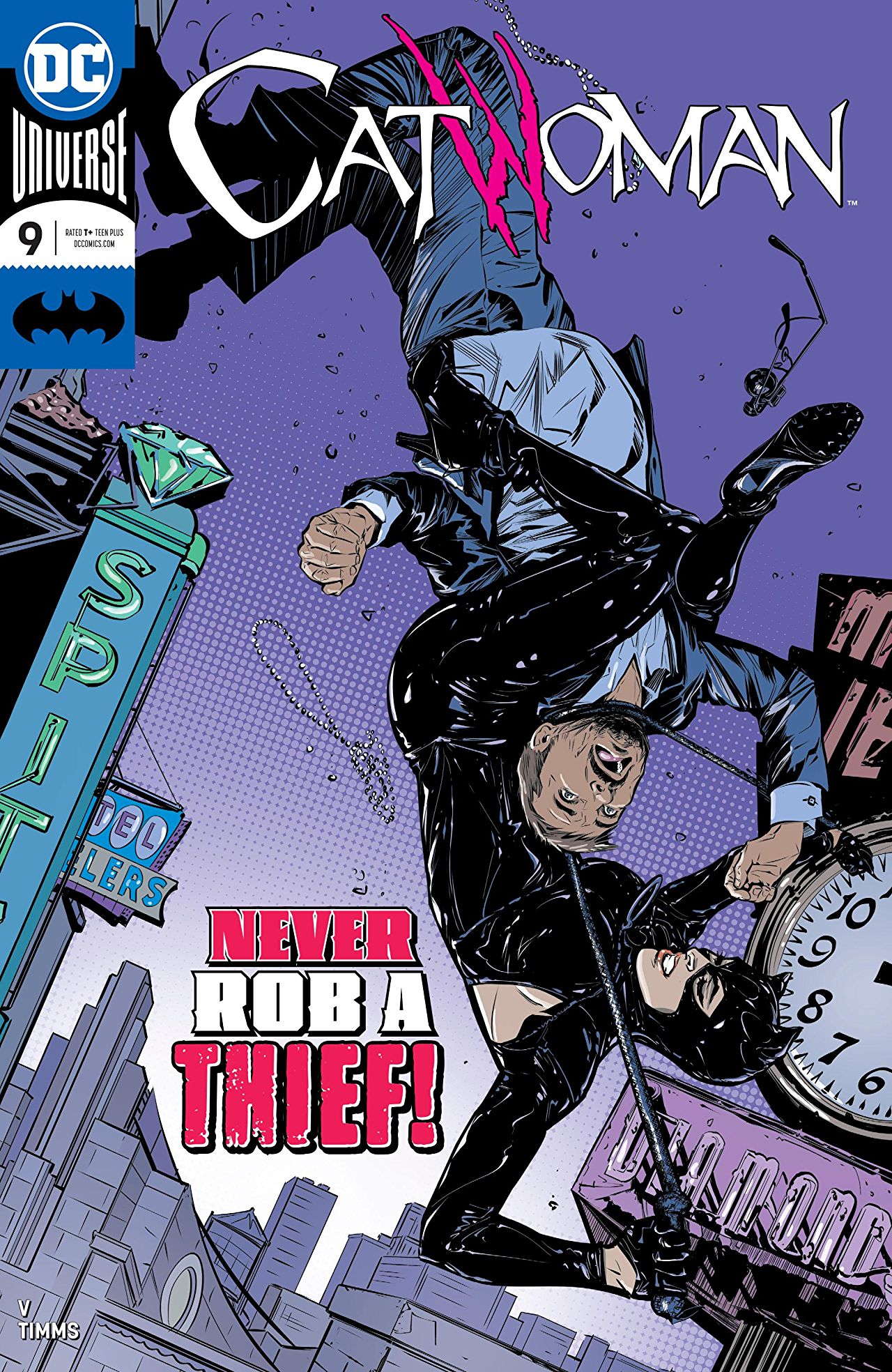 Overview: Selina sets up a sting for some crooks that rob her neighbors. Will she be able to pull off the scam and get away?

Synopsis (spoilers ahead): Selina Kyle’s Villa Hermosa apartment building is robbed and a bracelet that one of her friends was going to give to a prospective boyfriend was stolen. This does not sit well with Selina, you don’t mess with her friends. She vows to get revenge.

It turns out that everyone knows who runs all the crime in the area: the Broker, a fence in Chinatown that also runs a gambling room. Selina calls in her friends to help out. As she is planning the scheme, she is confronted by Detective Dean Hadley, a cop that warns her against taking vengeance. He says that things should be taken care of by legal channels and doesn’t need Catwoman muddying the waters. Selina quietly gets in his face to show she is not intimidated and he leaves. She also lifts his wallet and asks one of her friends to get all the info he can on Hadley.

At the card room, Selina is down to her last chip and is chided by the Broker, also known as Xin Liu. She is able to increase her winnings at the expense of one Jimmy Fleece. Fleece isn’t happy about her success and calls her a cheater. He then shoots her.

The cops arrive and Liu tells his men to put the dead Selina into a closet. Hadley shows up and says he heard a gunshot. He searches the place and finds the closet full of bloody, but empty clothes. Also, there is an open vent. Liu realizes he has been tricked and sends his men to guard his safe. Catwoman confronts the men at the safe and beats them up. She unlocks the safe but before she can get into it, Hadley arrives gun drawn. She attaches a tether to him around his belt and jumps out the window. Hadley calls for backup using the communicator on his belt but physics intervene and he follows her down. She catches him and saves him from dying on the sidewalk and he works his way back into the card room.

In the card room she finds the bad guys tied up and boxes of contraband stacked in the middle of the room. On the top is a red box containing a cat’s collar and a note to him from Selina saying ‘the collar is all yours’. A week later she runs into Hadley and all is forgiven. The only thing missing from the manifest was one bracelet. The Broker is going to jail. Hadley asks how she did it.

We get a flashback to the planning session between Selina and her pals. They correctly predicted Hadley would come to the gambling den alone to get credit for the arrest. When she had clicked the tether to his belt she also swapped out his communicator with one that contacted her men. The ‘cops’ that arrived were her guys. Jimmy Fleece was one of her guys too and he tied up the Broker and his men. The fake cops emptied the safe and boxed the contents. All’s well that ends well.

Analysis: Ram V. is the writer for this one-shot issue, and what a tour-de-force it is. He is most recently the writer for the Vault Comics title These Savage Shores, which is also excellent. Here he doesn’t disappoint. This issue is a Mission Impossible-type caper neatly packaged into a single issue. This could easily have been a three issue (or more) mini but there is no waste here. Even so, it doesn’t feel rushed and there are plenty of quiet moments and artistic touches throughout.

John Timms’ art is a big part of why this book works so well. The lines are simple. The faces are angular with long chins and a Timmsian underbite. I’ve always loved his art, particularly his ladies such as Harley Quinn. Though the faces are simple they still have tons of personality and expression.

The combination of these two creators’ efforts results in some wonderful pages. The two pages where we see Selina calling her friends to plan the heist, and then later when we see what their plan was, are both twelve-panel layouts with the rightmost panels containing only a red background and the words ‘Cha Cha Cha’. This alludes to the ‘dance’ that Selina says she is participating in.

Also, characters are introduced by text on the page of their first appearance – Xin Liu: “The Broker” for example. This helps move things along and reduce unnecessary dialogue.

Finally, the pages where Selina fights the thugs guarding the safe are lovely. One, in particular, has a red background and all the figures are just in black silhouette with Selina’s eyes shown as red. It is very effective. I had high hopes for this book based on my experience with Ram V’s work and my love of Timms’ art. They fulfilled my expectations and then some.