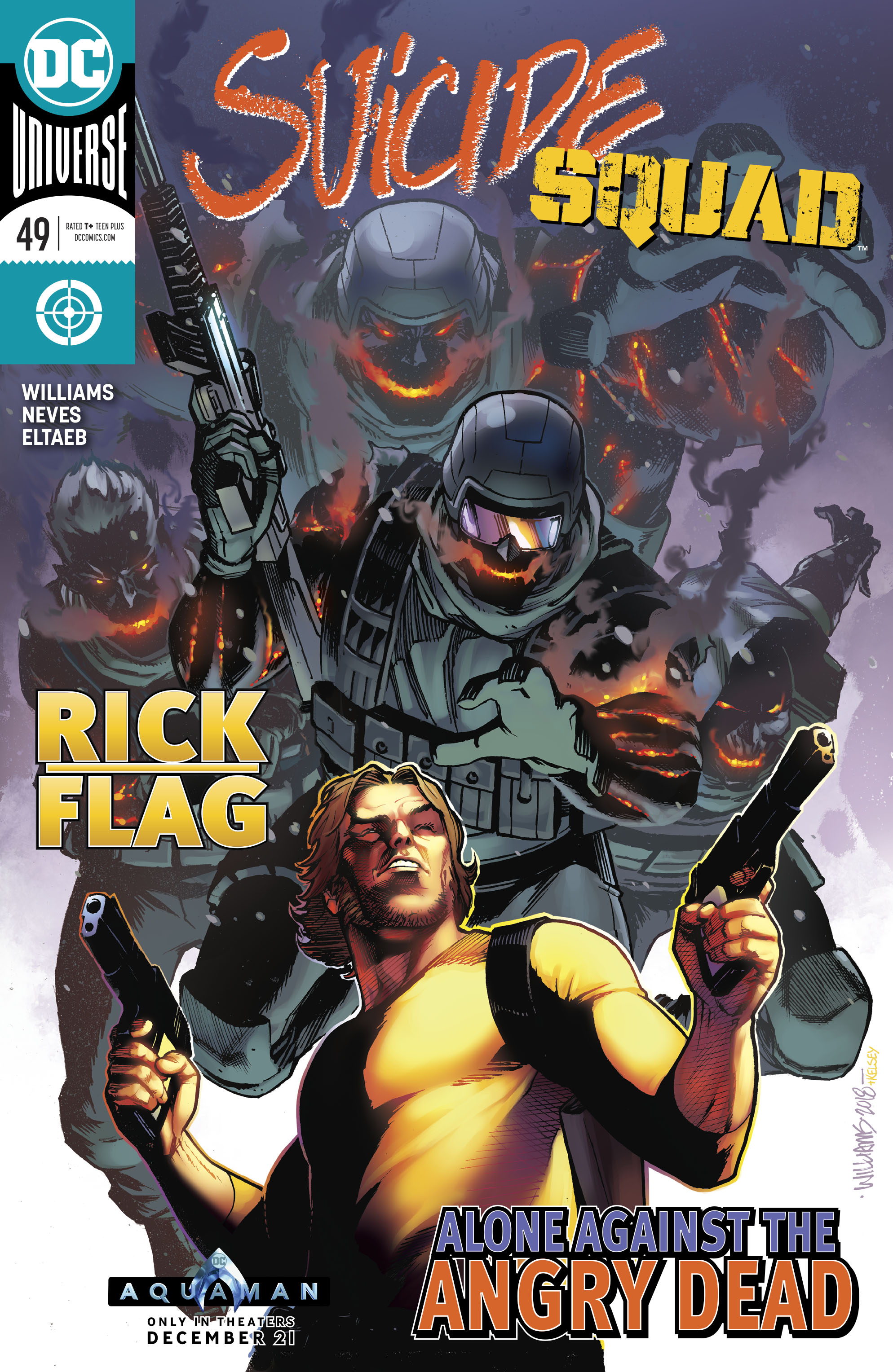 Overview: Flag confronts a captive Waller over her involvement in the death of his army unit as a mysterious energy threatens to destroy the world.

Synopsis (spoilers ahead): The story begins with a flashback of Colonel Rick Flag in some dessert where he and his men are pinned down and taking enemy fire.  Flag is ordered by his commander to take a cave complex which Flag refuses, as it would mean the certain death of himself and his men.  The commander orders Flag’s arrest and Flag’s men advance on the cave, where they appear to all die in an explosion.  Later, in Flag’s prison cell he is approached by Amanda Waller who asks him if he’s ever heard about the Suicide Squad.

In the present, at the underwater Temho-Meyta Prison in the Laptev Sea in Siberia, Flag screams at Waller, still tied to a chair, accusing her of being responsible for the death of his men.  A voice on a radio tells Flag to activate the brain bomb in Waller’s head and to kill her.  Waller denies Flag’s accusations and then proceeds to stand up in the chair, having freed herself, and lays Flag out with a left hook before taking off running.

Elsewhere in the prison, Killer Croc, running down a flooded hallway while on fire, as Flag’s old team, “the Vets, all with blue skin and glowing red eyes, looks on, with their leader, Grier, ordering them to “Spread the Energy”.  The Vets spread out to search for the rest of the Suicide Squad, waling over the body of the fallen Deadshot, who turns out was just laying low and proceeds to open fire on the Vets.  Deadshot dives under the water as Croc, still on fire, attacks the Vets.  Deadshot retrieves an unconscious Katana and Boomerang from the water, with Boomerang waking up.

In the control room, Flag vents out the water from the Station, causing it to begin to rise to the surface.  The Vets continue to advance on Deadshot and the rest of the squad, with Croc shielding the squad.  Croc tells his teammates to go while he holds them off and proceeds to charge at the Vets.  One of the Vets opens his mouth and Croc is engulfed in flames and collapses at the Vet’s feet.

Deadshot, Boomerang, and Katana close a door behind them and walk down a hallway of cells, with Katana wondering, as the prison was used to store, meta-humans, what else they were storing here as a spiked tail crashes through a cell window.

Elsewhere in the station, Harley Quinn and the hammer-headed, cue-card communicating, Annihilation Brigade member, Cosmonut, after a brief scuffle, open a vault containing the source of the energy that has infected the Vets, which turns out to be an imprisoned Tunguska, another member of the Annihilation Brigade.  Cosmonut shows Harley that he can absorb the energy emanating from the vault and tells Harley “it engulfed them.  It will eat the world.”

Waller runs down a hallway and collapses at the voice of one of the Vets over the intercom explaining that the implant in her head is a magnet, not a brain bomb.   A massive energy surge from Tunguska then envelops Waller and the issue ends with Flag being towered over by an infected Waller as the voice of the Vets explains that when the station reaches the surface, the world is going to burn.

Analysis: I’ve noticed a pattern in Rob Williams’ story arcs on this title.   The team goes to some exotic location, which is in some remote location, a mysterious force or energy attacks the team, and there’s a race against the clock to stop whatever it is they are fighting from spreading/infecting/destroying the world.  There’s something very repetitive about this story and as a result, without anything new to say, it is not particularly compelling.  Waller and Flag’s interactions are similarly repetitive.   Its fine to play with the same themes and have yet another secret about Waller come to light, but there is no attempt to really make it unique or shocking.  Is anyone really surprised at the notion that Waller may have had a hand in the events that lead him to the Suicide Squad?  And what is the difference between the “red wave” menace when the team went to space and this new threat?  It’s like the writer is using a template and just swapping out the basic details to tell the same story over and over again.  It’s like reading a really boring Mad Libs.

“The Vets” are not a particularly compelling group of villains.  There’s no real attempt to make them individuals or give them any sort of motivation beyond the usual “revenge” motive.  They aren’t even visually distinctive and I found it difficult to keep track of which Vet was which before giving up due to lack of interest.

I can see the attempt to give Croc a moment to shine which, I think, was intended to pay off the wringer that this title has put him though, but the moment didn’t feel big enough.   I think it would have helped if the Vets hadn’t immediately implied that Croc could be resurrected by the energy that they are infected with.

Now I’m all for a little weirdness in a story, but Cosmonut feels like it is from an entirely different story and his scenes with Harley feel like very out of place. This is a character better suited for Harley’s solo title.

The art by Diogenes Neves seems to have a real problem with staging the action in the story.   Waller freeing herself from her ropes was particularly clumsily staged.  It would have been better to have a close up of Waller’s hands freed from the ropes and go right into a panel or splash page of Waller decking Flag.

Final Thoughts: This series is stuck in a creative rut. It looks like this series is ending after the next issue, and in my opinion, could not be ending any sooner.   Hopefully whoever handles the eventual relaunch will have some new ideas, because there just aren’t any left in this title.