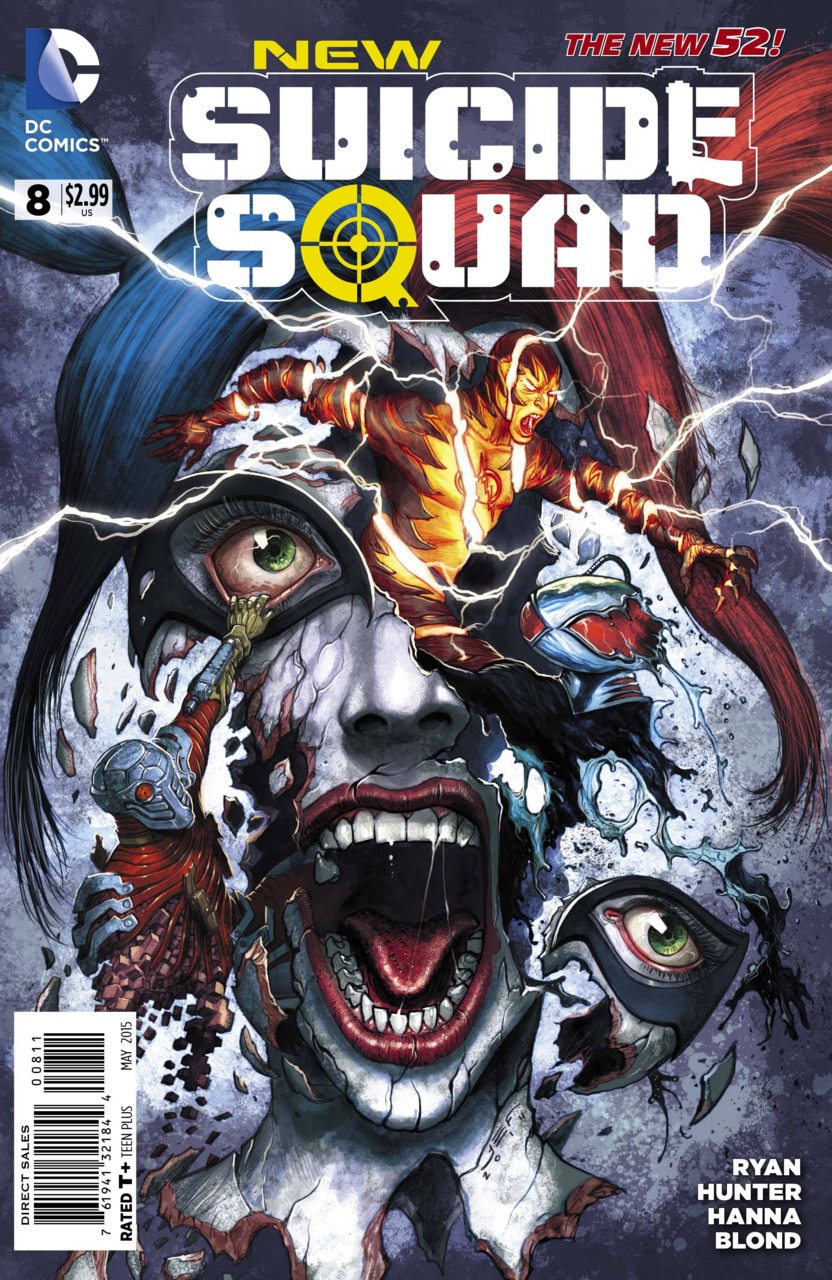 It is rare that I come across a book that has little to no redeeming qualities. However, in New Suicide Squad #8, I have found that book. It is truly a shame that a book with an all-star cast of characters can’t manage to find its footing. Everything about this book is exceptionally subpar. I am confident that with a concerted effort, my eight-year-old daughter could reproduce some of the art that plagues the pages of this issue. Furthermore, the writing in this book is distorted and bewildering with the turn of every page. This book easily takes the top spot in my list of the worst comic books I have ever read. So here we go folks, lets dig into the specifics that made this issue such a catastrophic mess.

The issue opens with the mysterious star-chested meta human saving Harley from a falling Daily Planet orb. I am perplexed at the fact that Sean Ryan introduced this character a few issues back and has still refused to give the reader an idea of his identity. The mystery star man proceeds to stop a bombardment of missiles from destroying the Suicide Squad, and the team, still led by Manta, makes a swift escape. We see a general and what appears to be a scientist discussing the mystery man and how his programing may have malfunctioned. Again, I am not sure why we don’t know the identity of this character or what caused him to go rouge.

After an incoherent page showcasing various characters in this story, the focus shifts to Washington DC where Victor Sage is having a conversation with an official secretary of some sort. He is informed that although the Suicide Squad has not completed a single mission, their performance has been looked highly upon by the talking heads in Washington. This is another starling example of this book having no idea of the direction in which it is moving. To make matters worse, the art in this section is absolutely horrendous. In one panel Vic looks like he could have been an extra in 1968’s Planet of the Apes.

As the story moves forward we are given a brief glimpse into the current situation Deadshot is facing. However, this is very short lived (one page) and adds little to the story as a whole. We shift once more to observe a conversation happening between Amanda Waller and Black Manta. This dialogue feels like a satirical take on the characteristics that make up a comic book character. Ryan is doing these characters a great disservice writing them in such a nonsensical manner.

As if to put the icing on the preverbial cake, this book ends with a page that makes little to no sense and leaves the reader feeling puzzled. Specifically, we see Bonnie, a completely irrelevant character, returning home to her husband to discuss their fighting children. I assume that this is supposed to bring a sense of normality to the issue, however, it just feels out of place and needless. In a way it was a foolish end to a wholly foolish issue.

This entry into the Suicide Squad series was unbearable. This is a book that I wouldn’t recommend to a mortal enemy. It is sad and unfortunate that such a great cast of characters is being subjected to such horrible writing and art direction. Take it from me comic fans; this is one issue that you definitely want to leave on the rack.