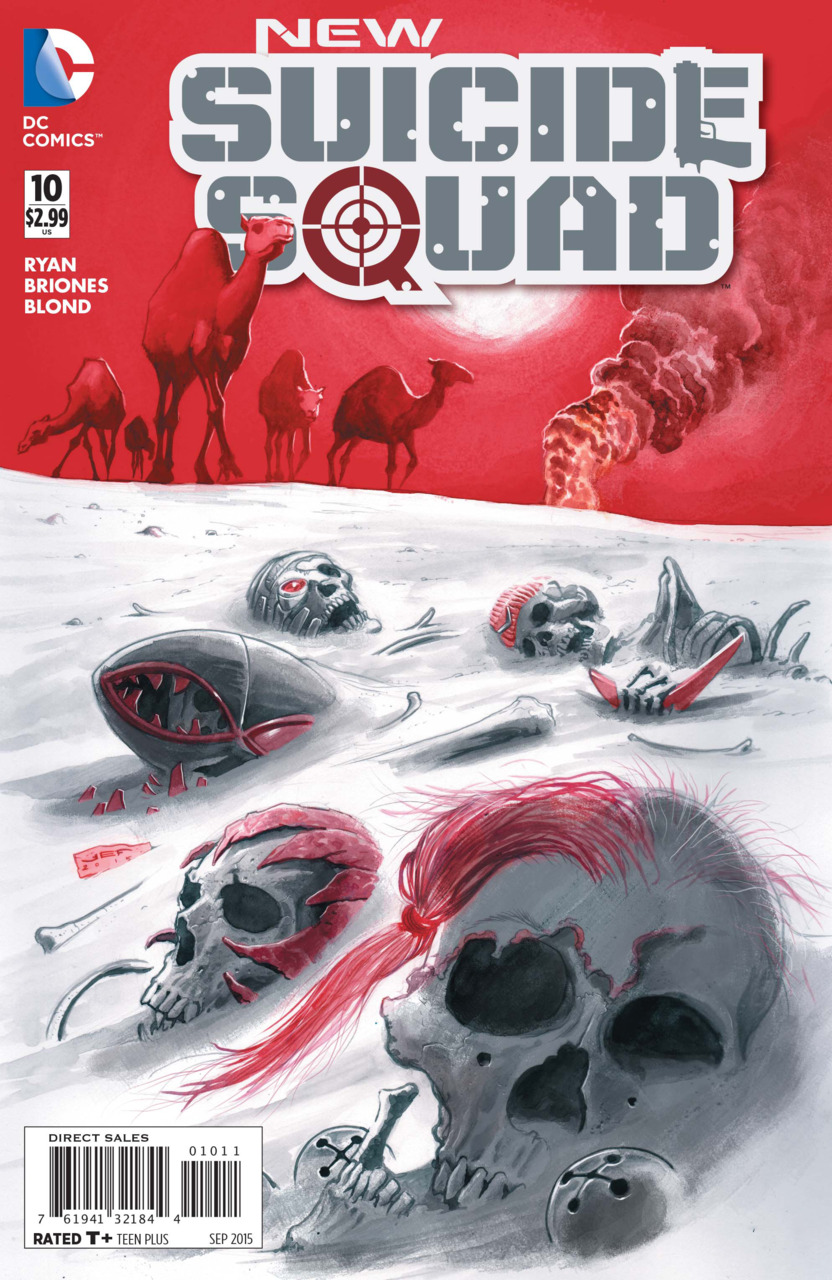 “Monsters” continues with a member of the League showing Deadshot, Black Manta, and Boomerang a school in the village they are located in. Boomerang appears to be showing an interest in the classrooms. The League member is describing the education policy with the Squad members. Education is building a strong foundation. The children are in school for eight hours a day and at night they are housed in dormitories away from their families and other distractions to their education. Boomerang asks what they do on the weekend. He is attacked for his question. The League is building a new world and nothing can stand in its way. Manta is in full agreement.

We cut to the desert where Harley and the Parasite are having fun. Harley is using a handheld rocket launcher and firing on Parasite to feed him. Reverse Flash the last member of the extraction team questions Harley for her lack of stealth. Harley is not worried as no one can see them. Reverse Flash appears to be showing some heart by asking why Harley likes to kill and who she was before she became Harley Quinn. Harley just responds that she likes to hurt people and she was bored before she became Harley Quinn.

Back at Belle Reve, Victor Sage approaches Bonnie, Amanda Waller’s assistant. He wants to see how Belle Reve works and to butter Bonnie up; he says that she is the expert. Bonnie takes Sage on a tour. She takes him to the computer room where all the servers that control Belle Reve are housed. This is the central hub were everything is controlled. She does not know how everything works but a group called the Pearl Group designed everything at the prison. Amanda interrupts their conversation. Amanda asks Bonnie what is going on. Bonnie states that she is just giving Sage a tour. To stop this Amanda tells Sage that she needs him to look over some future team members and she needs to know his thoughts. Sage immediately leaves. After he leaves, Waller unloads on Bonnie   Vic Sage cannot be trusted and she suspects his recent attitude change is a sign that he is up to something. Bonnie is too trusting and Waller leaves her questioning when will she realize how awful everyone really is. This gives us a glimpse into Amanda Waller’s character that she does not trust anyone and she always believes people have hidden agendas in everything they do.

Back at the League village the tour continues. The Squad is shown where the super villain weapons are housed but they are not allowed in just yet. Instead the Squad has a League mission. They are to attack and destroy a refinery that is attempting to create the Lazarus pits. The pits became a crutch to the League of Assassins by offering immortality. Man was meant to die.

Five minutes after this meeting Boomerang wants to attack the weapons armory, kill the League and leave. Black Manta does not want to take this step. There is more going on, they have not been inside the weapons lockers and they do not know who the real leader is. It is too soon to cut and run. Boomerang does not care about the mission and Deadshot makes an interesting point that Waller did not wire them for this mission. There is no way she can know that they just cut and ran. Manta is adamant they do not leave until the mission is over. Boomerang just states that Manta likes it here. Manta does not deny it. Boomerang is bored and sees no fun while Manta does not think that having fun is relevant. Boomerang leaves the barracks.

Later Manta, in full uniform, is with the League patrolling at night. They hear laughter and kids having fun. On investigating, they find that Boomerang organized a night time soccer match. The League attacks Boomerang, who responds by fighting back. Black Manta blasts Boomerang and jumps him pummeling his face. Manta states that Boomerang has corrupted the children and the punishment is death. Next we meet the new boss.

I was not overly impressed with this issue. It does give us some character moments. We see the pessimism of Amanda Waller. We also get an interesting picture of Reverse Flash. He even says that he wants to get better and he does not understand that others like Harley do not. To him there has to be a reason to do what he does and just liking something and being bored are not it. We also see something similar in Captain Boomerang. He needs to have some fun and enjoyment in what he is doing. After all, everyone works for the weekend. Black Manta on the other hand sees a larger purpose. Everything does not have to be about fun. Being a bad guy is not about enjoying yourself. It looks like Manta might be searching for deeper meaning and the League may be providing that for him. Harley is just Harley. She does what she does because she likes it and to avoid being bored.

As far as action, not much happens. We basically see Boomerang getting beat up twice in this issue but the action to me really does not move the story forward.

My biggest complaint here is that the story does not move forward. We just meander around listening to ideologies and I see the story just stopping. We are left with questions like what is Sage really up to in Belle Reve. Will Manta leave the Squad for the League? Where is Deadshot in the end? Black Manta is the only one with the League when they find Boomerang.

I liked the character insights but I did get bored reading this issue.