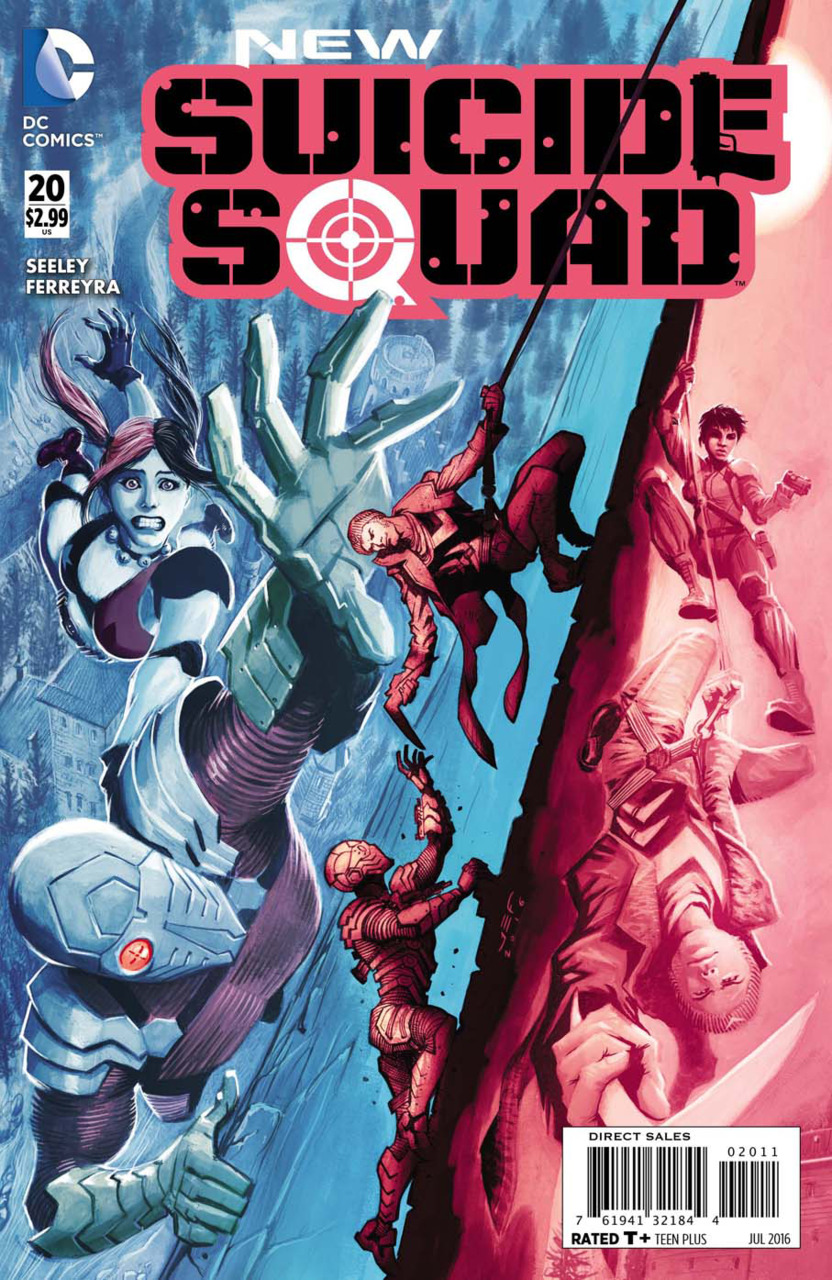 Synopsis: Opening in the dungeons of an old castle in Germany, Deadshot gives a quick recap of the team’s situation and blaming much of it on Harley Quinn. As much as he wishes bodily harm to her, he knows that her background in psychiatry would be very valuable in understanding their enemy…The Fist of Cain. After cracking a few jokes, Harley begins to describe the the type of people who join groups that reward its members for killing. She, ultimately, places the fanatics in the second type that is comprised of those seeking competition and wanting to “be the best”.

We next see the team fighting members of the Fist of Cain while Deadshot lays out the strategy in the past tense. It is clear that he has planned for every angle that the enemy could break through. He ends his speech by saying that after killing Adam Reed and disabling their neuro-bombs, the team will take out Amanda Waller.

Meanwhile on an airplane, Waller and her reinforcements are closing in on the location of the Squad. While Captain Boomerang prepares to humiliate Deadshot, Ashemore, aka Hunky Punk, talks about his regrets of being a villain and wanting to be a hero.

Back at the castle, the team escapes the dungeons and begins to go on the offensive and find Reed. Cheetah follows a scent of blood that belonged to Reed’s murdered girlfriend, Seraphine. They find her pool of blood has become a rose petal. Deathtrap becomes terrified and runs from the room saying that it is the site of the Spirit of Murder. As Deadshot tries to retain order, the room explodes. Harley finds herself facing Cain followers only to be saved by Hunky Punk. His moment of valor, however, is short lived as he is shot in the head by Seraphine. She is no longer Seraphine but now the host body to the Spirit of Murder. She turns her attention to Harley but Diablo creates a barrier of fire between them. Cheetah yells at Diablo to get Harley out and leaps at Seraphine that she is also a force of nature.

Split off from the group, Deadshot is rescued by Waller and the pair find Deathtrap in a chapel area of the castle. Waller finds it strange how easy it was to break in to the castle and is quickly shocked by Reed. Deathtrap is about to shoot Reed when Reed reminds him that if he kills him before he becomes “The Shepherd” then he will have wasted a potentially famous kill. Adam tells him that he knows what he must do to “cement his legacy”. The issue ends with Deathtrap turning his gun on Deadshot and firing.

Thoughts: Once again, Seeley and Ferreyra deliver another great issue this month. It has definitely become one of my favorite titles to read and review. It is almost a shame that Rebirth is coming and removing Seeley from this book. He really seems to have a good grasp on these characters and the overall point of having a book like the Suicide Squad. His attention to the redemption aspect of what these characters can achieve is a big focal point for me. All the characters are “bad guys” but they still have a part of them that still seeks the heroic life in some way. Even if they don’t admit to it, each character has moments of heroism that make the story that much more compelling.

As with most issues, it was not perfect. However, I only came up with one thing that did fit for me and that was the cliffhanger of Deathtrap shooting Deadshot in the head. Even though the tag line for the next issue was, funny enough, “dead for real this time?”, I just found this a little annoying. We already saw Deadshot “die” just a few issues ago so it seems a little soon to play that card again. He could very well be dead but it just does not seem a fitting end to Floyd Lawton.

With only two more issues of this series, I’m definitely looking forward to seeing how the team will get out of this situation and come to terms with Waller. Hopefully, the great run that this title is on will continue after Rebirth.