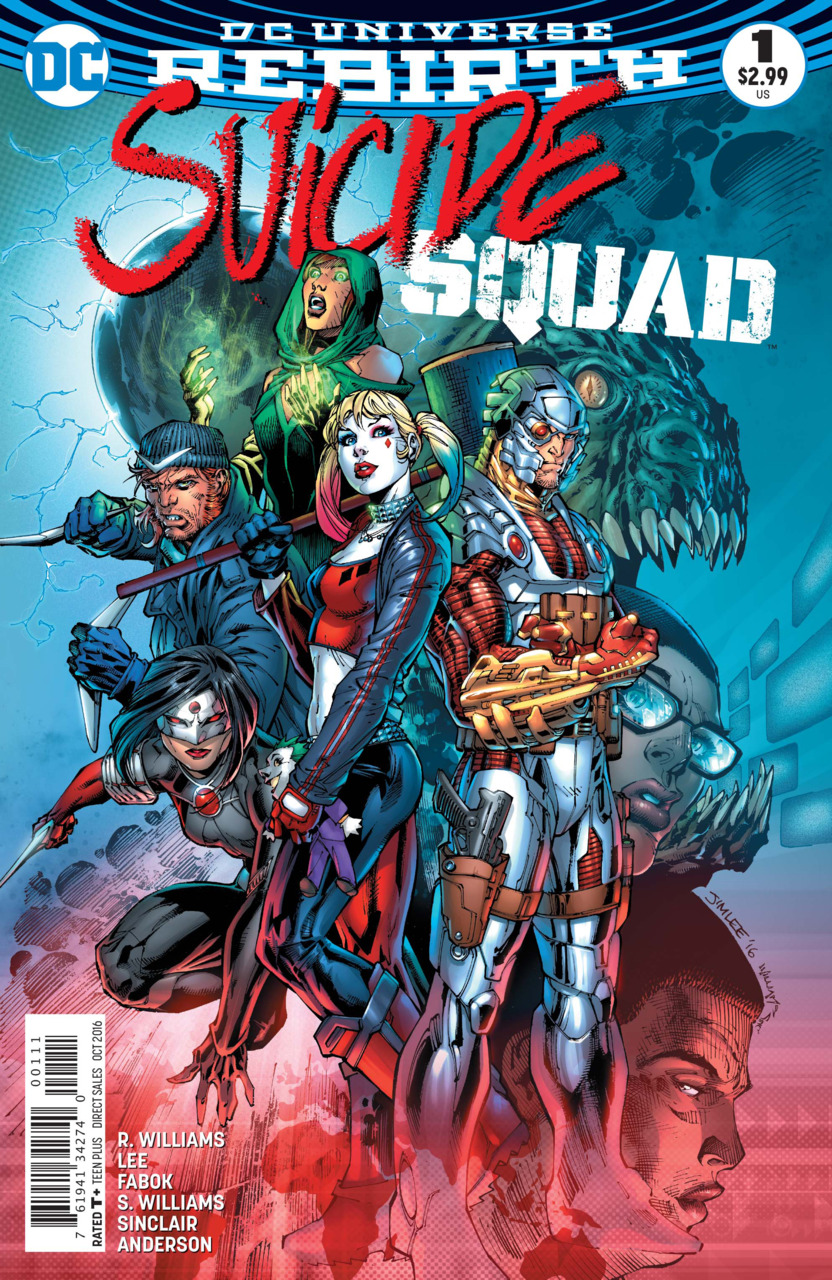 Synopsis: We open with Amanda Waller making her way toward Belle Reve on a helicopter, while commenting on how she plans to protect the world from the evil that is in it. Belle Reve is a high-security prison just off the coast of Louisiana, where some of the most dangerous killers in the DC universe serve their time. Rick Flag will be serving as the team leader, and Katana is his second in command. The cells can be brought out and removed individually, which makes things easy for Waller to choose who to join the team. She decides on having Deadshot (who is ready to shoot someone), Harley Quinn (who is wearing a Rebirth t-shirt), Captain Boomerang (is having digestive issues), June Moon (has no idea what’s going on), and Killer Croc (just doesn’t want to go to space).

Waller, in an attempt to spend all of the fictional DC universe tax payer dollars, puts the entire team on a craft in space. The story reason is so that they can drop into an area before anyone would know they were there. Harley finds a Pokemon, Captain Boomerang is messing his pants (again) while watching soccer, Katana remains silent, Flag is explaining why they are in space, Deadshot is asleep, June is freaking out (still), and Croc is getting sick. The craft drops the team into orbit, and it goes into a spin to maintain it’s trajectory. Croc ends up loosing his last meal – and because of his helmet – begins drowning in it. Flag, in an attempt to not loose any more members of his squad, breaks free of his suit and smashes Croc’s, saving him. However, this destabilizes the craft and throws it off course, causing it to crash into the ocean. Next: we get the promise that someone will die…

Script: Rob Williams has jumped around from series to series for a while now, but the guy knows how to write. Everything I’ve read of his is so far has been a real joy to read. This is no exception. He does a great job giving each character a unique voice, differing tastes and various degrees of humor. I look forward to seeing how this series grows in the future.

Pencils: Jim Lee’s art is always welcome. There’s a reason he’s considered one of the best in the business… There’s also a reason he doesn’t do monthly books anymore… It was very disappointing to hear that he was having to shorten the length of the comic so he could keep up with the schedule. Especially when you look at all that happened in his story — the team literally just went to their mission. It wasn’t some action-packed road trip like we are getting in All-Star Batman. They just showed up — THAT’S IT. Now, don’t get me wrong, it was fun, and I enjoyed it… but you aren’t going to get a top rating just for showing up.

Inks, Colors, and Letters: Scott Williams has been inking Lee for a long time, and there’s a reason for that. His style fits well with Lee, knowing when to sketch it out, and when to leave things clean. The first panel was a bit rough, but things picked up from there. Alex Sinclair’s colors have always looked good to me. He does well keeping with a theme on page, but he hides it very well — making things come across naturally. His lighting is also very skilled, adding another dimension to the page. Nate Piekos does well lettering here as well, and with the assistance of such seasoned veterans, it’d be hard to mess that up.

Backup Story: This was a seven page story that actually had more character progression than the main story. In it, Deadshot is hired by Kobra to kill Bruce Wayne. However, they threaten his daughter so that he will do their bidding. He knows they won’t let up if he does the job, but his daughter’s life is in danger if he doesn’t. So he misses, which gets Batman’s attention, and they take down Kobra together. His daughter finds out that Floyd is Deadshot, and he surrenders to the police, who send him to Belle Reve.

Jason Fabok does the backup art this issue. I kinda wished he was doing the main story… His art is so clean, and always on point. And he told a better story in seven pages than Lee did in eleven. I’m not hating, that’s just a fact. Brad Anderson’s colors are what gives Fabok’s colors it’s tone. The clear contrast we get adds the the clean lines that Fabok produces, giving everything a cohesive feel.

Closing Thoughts: Amanda Waller being the point of view is interesting. It adds to her character and why she’s there. In the New 52, I felt as though she was pointless. Here, I understand her. She may do horrible things, but I understand why she makes them, and that makes me like her.

Most people would complain about the lineup, saying it’s to match the movie, but it was lots of fun to see how all the pieces fit together – how they all interact. Flag adds a morality to the team. Katana is the disciplinarian. Both of these characters feel necessary to the team. It’s hard to feel like a team is bad, when the whole teams morality level is very low. With morally good people, we get to see characters interact, that adds to the tension in the team.

Recommendation: Despite my critical ramblings, I’d suggest you buy this book. It’s not perfect by any means, but it has a great team dynamic, and it’s fun to read. The writing is solid, the art is top notch… The backup story saved it, it’s a buy.