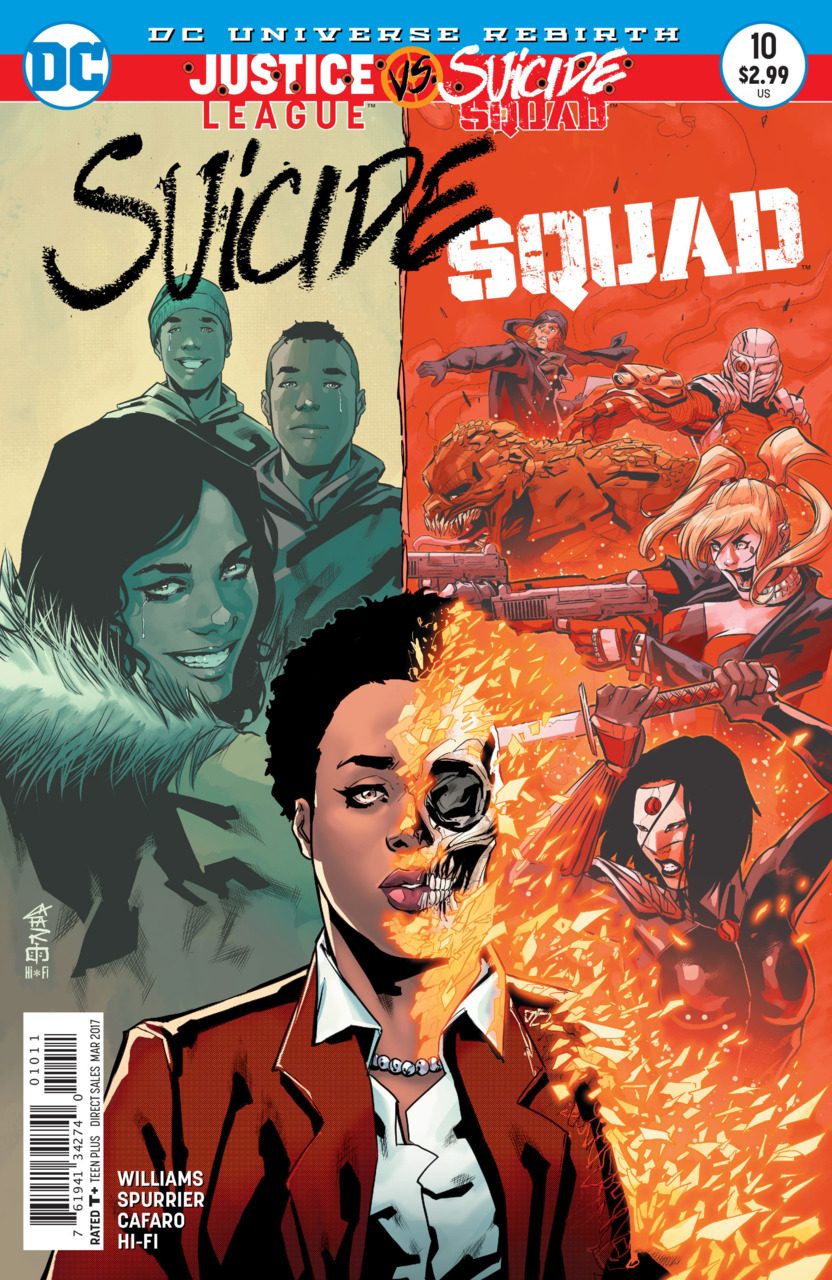 Editor’s Note: This issue takes place as an epilogue to the Justice League vs Suicide Squad event.

Synopsis: In Alaska, the snow is painted red with blood. Rustam has gotten through the military base and is tearing people apart. The soldiers, fearing the worst make their way to the nuclear warheads. But all they find is a picture of three teenagers.

In an undisclosed city, three teenagers are walking down the sidewalk, while two of them are arguing about the ending of Blade Runner. The young woman tries to calm the two down, while mentioning a “little one.” A man bumps into her, almost knocking her over, but doesn’t seem to care much. The girl’s brothers yell at him for a bit, but that is cut short when a military looking vehicle pulls up and snatches them off the street.

The three teens huddle to the side of the vehicle, trying to protect each other. Croc is locked up in a cage on the other side. The vehicle comes to a stop, and you can hear people talking. The young woman recognizes one of the voices… It’s her mother – Amanda Waller. The mother she hasn’t seen in two years. Amanda has brought them to an abandoned building, which now serves as a base. She tells them about Rustam, and how he’s threatened them. She’s been staying away from them so that they wouldn’t be caught in the crossfires, but for right now they are safer with her. She didn’t trust the authorities to protect her children, so she used her own team. Boomerang, Deadshot, and Harley are sent out of the room, but Harley seems to have sympathy for the broken Waller family. We find out that Amanda has lost her husband, a son, and a daughter. Since then, she has fully dedicated herself to her work.

Rick Flag, who is on the rooftop of a nearby building with a sniper, sees someone approaching the building. Waller calls for Croc, and he nearly eats the man, but Waller shocks him with a taser implant. The man is a courier, and he give Waller a tablet. On it, plays a live video from Rustam. He tells her if he wanted her kids dead, they’d be dead already. No, he placed a tracer on the first earlier. He was the man who bumped into her. He just wanted her to see her children one last time. He mocks her, telling her that she’s the woman who knows everything, but didn’t know she is going to be a grandmother.

Her children explode on her, telling her she doesn’t deserve to be in their lives anymore. Amanda orders Flag to take the Squad back to Belle Reve, and her kids home. But she wants surveillance on her children for the next forty-eight hours… To be continued.

Thoughts: So let’s just jump into this… The reveal that Waller has a family that she’s abandoned… I don’t know how I feel about this. I would have liked to have gotten a tease of it, a mention of it before, but if she’s buried herself in her work, it would make sense that she didn’t mention them. Two years can be a long time for a younger person, but the resentment her children have for her feels a little too dramatic… but maybe this family is a bit dramatic. I like that Rob Williams is using Rustam as a follow-up to the previous event. Rustam was the most interesting character in that event, and has good reason to hate Waller. He did everything for her. He was a good soldier, and she threw him under the bus. She locked him away, just for knowing too much. I like the character even more, after doing a quick google search, and seeing that Rustam was in an opposing group to John Ostrander’s Suicide Squad.

Rustam’s scimitar gets so hot, they can cut through anything… but wouldn’t that work like a lightsaber, then? It uses superheated plasma… it should be so hot, that it cauterizes any wound it makes, therefore – no blood. It’s also so hot, that it can create portals that he can travel through. I thought this was important to point out how he could get from Alaska to wherever Waller’s children where so quickly.

Giuseppe Cafaro is the artist here. He does an okay job, but his work isn’t my favorite. He gets a bit too heavy on the ink in the first full page. It’s not like the page is covered in inks, it just looks like he made a mistake on one character and tried to cover it with heavy amounts of black ink. The rest of the issue, he struggles with consistency in his style. It changes from panel to panel, as he tries to figure out the tone on the run. Hi-Fi colors this issue. I don’t have any issues here, I’ve just never been a huge fan of his work. He does an okay job, but nothing spectacular. Pat Brosseau letters this issue. He does a good job, but it irritated me when Waller’s daughter screamed at her for a paragraph, which probably isn’t Brosseau’s fault, but the text did add to it.