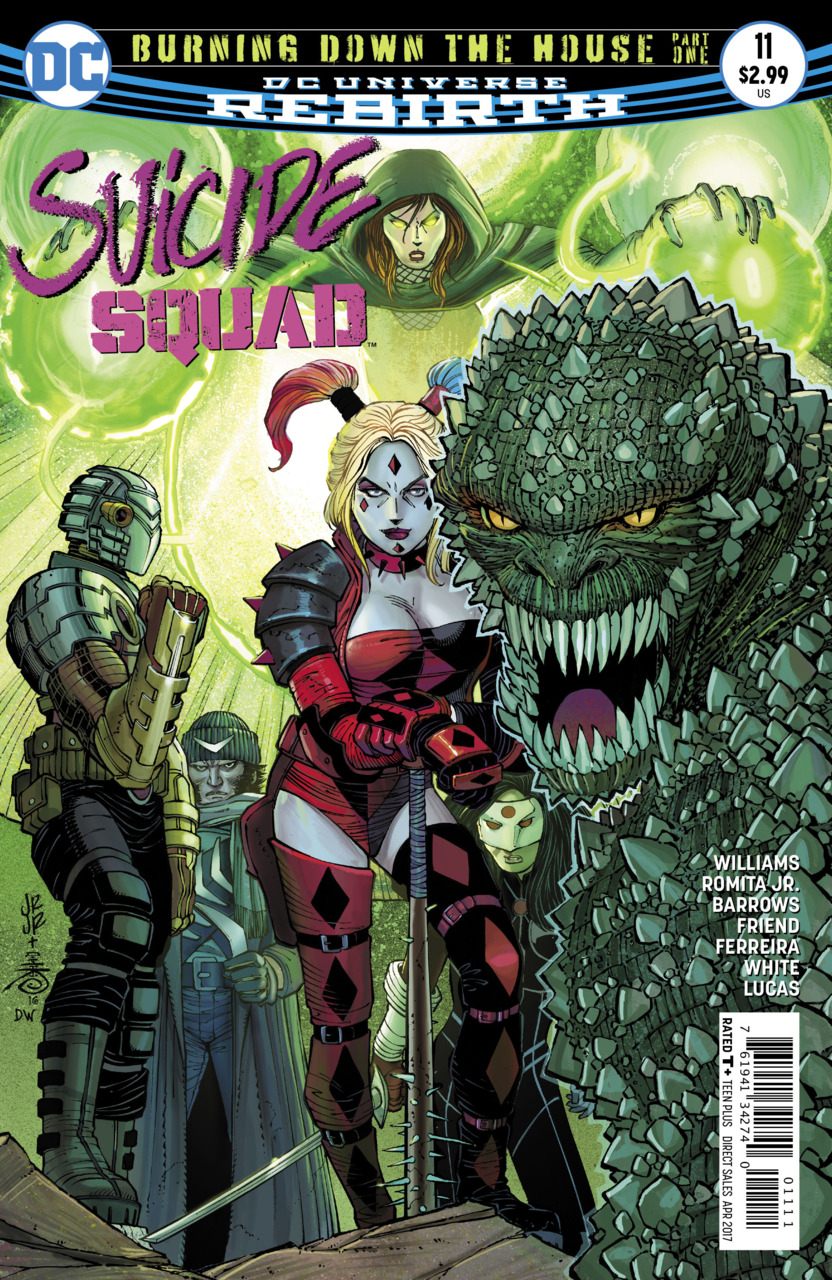 Synopsis: In the halls of Belle Reve Penitentiary, Amanda Waller is confined to her office. She sits there, by herself, drinking whiskey and trying to figure out where Rustam is. However, it’s hard to track a guy who can teleport…

In Tibet, the Squad is following through on some intel they got, trying to find and destroy the Annihilation Brigade before they become a problem. The team infiltrates a base, however the Brigade isn’t there. But, it seems they do have some files they don’t want the U.S. to get their hands on. Enchantress makes Croc get even more muscular, and Boomerang takes out the legs of a guard who’s making a break for the computers so that he can wipe their memory. Flag and Katana try to talk the guy out of pushing the button, but he’s not backing down. Deadshot shoots the guy in the head, solving that problem really fast. Harley tries to talk Flag into giving the team a day off, and kinda flirts with him in the process. Croc admits he’s been kinda stressed lately, while he stuffs his face of prison guards. Captain Boomerang is craving some curry, and Katana and her sword want to go shopping.

Harcourt has been placed in charge of the Squad in Waller’s absence. Waller has been placed on leave and is under investigation of the Justice League / Maxwell Lord situation. Hack is under Harcourt’s supervision, trying to decrypt the new intel. Hack tells her that she’ll have to use her powers to go into the hard drive to get extract the information. She gives her permission, and tells her to relay the information to her only. However, Hack travels through a digital portal and gives the information to Amanda Waller.

Blackgate Penitentiary, Gotham City. A portal opens up from the inside of the prison walls, and Rustam steps out. He walks through his way through the prison, slaying any guards and slicing open any doors that get in his way. He releases all the prisoners inside. Ready to reign hell down on Amanda Waller.

Analysis: So this comic still has the same problems that it had before, where we are getting half a story… however, Rob Williams has structured this issue much better than than the previous ones. The pacing in this comic is so well done. The story still feels short, but it feels like the ending of a comic. The build up all the way to the climax on the final page made feel like it was wrapped up in an nice package. John Romita, Jr. is a welcome addition to this series. I love the guy’s storytelling ability, and he packs so much on every page. His style is perfect for a series such as this. Richard Friend inks this issue, and does a great job here. There was a time or two where I felt like he did a bit too much, but overall it was great. I love Dean White’s colors with Romita. It’s a completely different style than they did with All-Star Batman, but looking at it, it still looks like Dean White’s work.

Secondary Synopsis: Amanda Waller, a little tipsy from the whiskey, is opening up to someone who probably understands her job more than most… a power drained, restrained General Zod. Harcourt has Waller escorted out of the building and away from Belle Reve. Waller asks to be taken to New Orleans… where the Squad is currently hanging out, because they got that day off they were asking for. Captain Boomerang is drinking beer, giving dancers money, and attempting to hit on them by testing their knowledge of Boomerangs… and he realizes that he’s lost his mojo.
Harley is sitting at a diner, staring out the window. Rick Flag sits down with her. He knows that the team has been through a lot lately. Most military squads go though something like this. He knows something in her is changing. She notices Amanda Waller walk past the window, and Quinn excuses herself, telling Flag that she’ll be back in no more than ten minutes.

Meanwhile, Floyd is taking this rare opportunity to see his daughter for the first time in years. She (Zoe) holds no resentment toward him for what he did. She knows he saved her. She wants her dad back in her life.

Waller seems paranoid, and darts into an alley. But a figure appears with two pistols and asks her if she has any last words. Waller responds “Don’t miss.” And she is shot in the middle of the chest.

Secondary Analysis: Again, Rob Williams maintains his pacing in the second half. His secondary stories have been the highlight of each issue, but in this comic, I felt like both stories were well done. Eddy Barrows art was solid, but there were a few pages where it felt rushed. Eber Ferreira does a great job inking here. I love the experimenting that he and Barrows have been doing with the shading. I’m not sure if it’s water color or what, but it looks great. Adriano Lucas colors this, and does a good job of capturing the tone of the book from scene to scene.

The page turn at the end of both of these stories were fantastic, and has me excited for what is to come next… After all, we’ve seen people recover from worse, right?