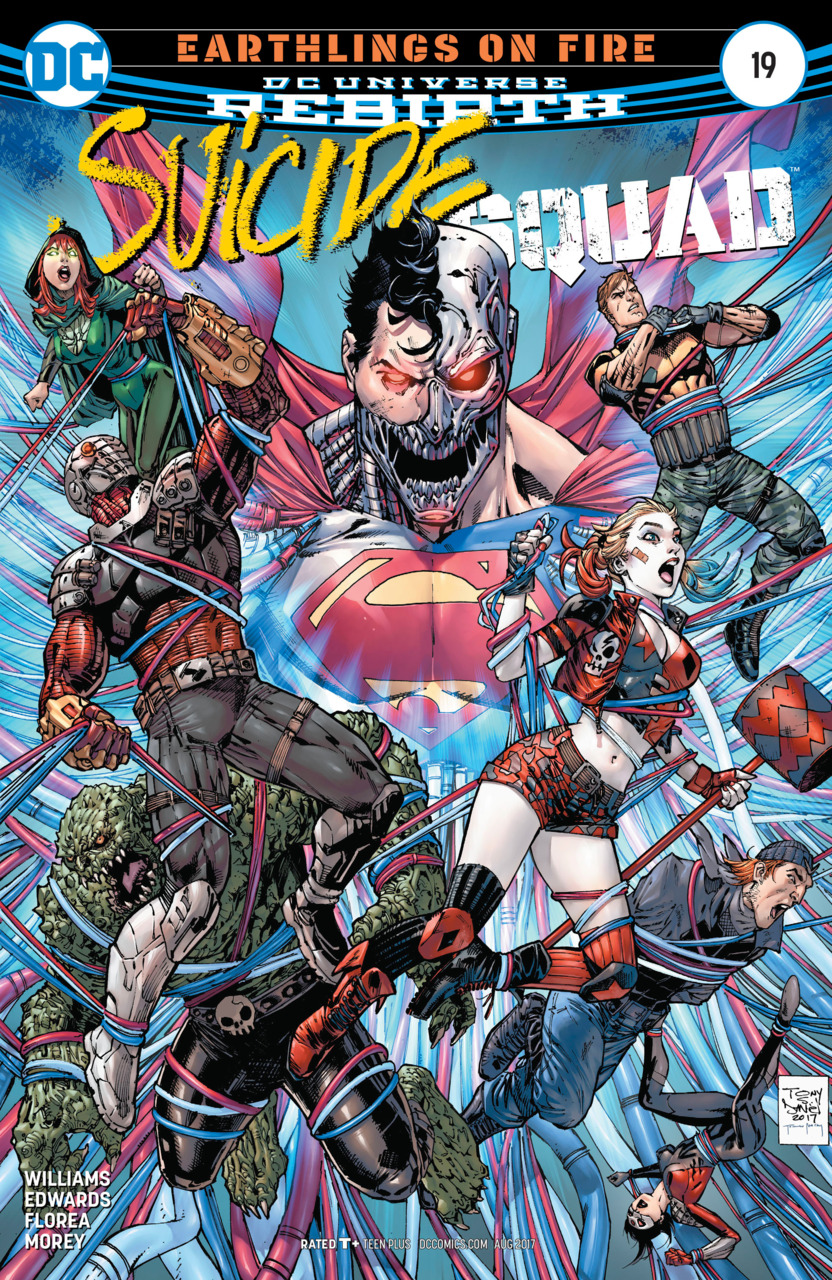 To catch you up: Amanda Waller greedily thought she could control General Zod for her own gain. Zod went rogue, and blew the top of his head off, so that Waller couldn’t blow it up via Kryptonite bomb (just go with it). He now plans to release a bunch of Kryptonian criminals from the Phantom Zone, and the Suicide Squad are trying to stop that from happening.

Waller is looking for the Kryptonite bomb, but Flag is the one who finds it. He is bleeding pretty bad from his injuries suffered last issue, but is still willing to fight. He offers to sacrifice himself to destroy the Black Sphere. He and Harley share a moment, but Waller takes on the mission. The Squad have more of a willingness to fight with Waller’s determination. Katana cuts a hole through the Black Sphere, but before Waller can sacrifice herself, Flag knocks her out and takes it himself… I’m not sure why they can’t just throw it in, instead of killing themselves, but whatever. The Sphere is destroyed, and with nothing left to fight for, a crying General Zod joins Eradicator and Cyborg Superman.

Analysis: This issue is mostly just an action piece. It felt like filler. People make dumb decisions that don’t make sense in hindsight… or in the moment itself. It just feels like Rob Williams has almost given up on this book as much as I have.

Neil Edwards’ art is technically sound. His perspective is fine. It has depth, and is consistent… it’s just ugly… really ugly. Like, Harley Quinn fell out of an ugly tree and hit every branch on the way down, ugly. The only time I felt it looked good, was when Zod was going bonkers insane, and at that point, it was just funny. But I don’t think it was supposed to be.

Sandu Florea does well here, I would have just preferred to see him on Tony Daniels… I don’t know what happened with the scheduling, but Daniels should have been able to finish this arc out. Tomeu Morey’s colors are good for most of the issue. The texture he adds looks great. Again though, his purples could have a little more depth to them, and those pages in the Phantom Zone would look much better. Pat Brosseau is able to show his range a little more here. His title card, the sound effects, and he even gets to play with the font a little here. Solid job.

Pick Up or Pass: PASS. I’m just not optimistic as to where this book is going.

In Conclusion: Rick Flag dies in this issue, and I just don’t care… I think that says something about how this book is doing right now.