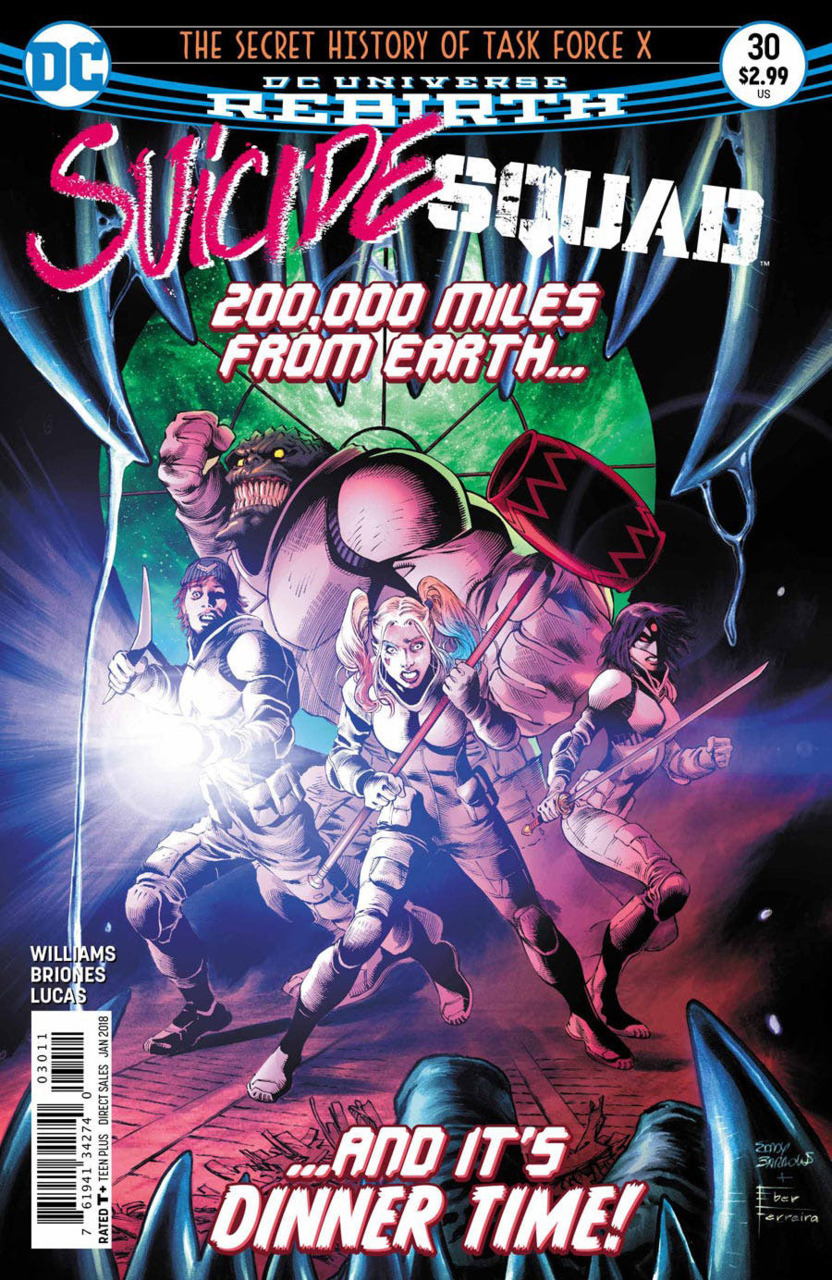 Overview: The Suicide Squad faces off on the Moon with the Red Wave monster.

Synopsis (spoilers ahead): The story opens at the Argent space station where Karin Grace looks on with concern as Argent comforts her, with Karin saying that Rick will set them free.  Meanwhile, back at the Task Force X Moon base, Harley Quinn is confronted by the Red Wave Monster and Rick Flag Sr, who has been possessed by the monster.  Flag Sr activates Harley’s brain bomb, paralyzing her, so the Monster can take control of Harley.  Harley is saved by Captain Boomerang, who is quickly taken down by his own brain bomb.  Katana and Killer Croc then take a stand against the monster as Harley slips away.

Meanwhile, in a plane over Nevada, Deadshot, Enchantress, and El Diablo look on while Amanda Waller continues to read King Faraday’s diary.  Waller orders the team to turn the plane around and go back to the air field when she reads a warning in the journal addressed to her by name, stating that something is controlling him, that something needs to be stopped from coming to Earth, that Flag will lie, and to fire something into the sun.

Back at the ship, Harley finds a vault full of alien artifacts from Task Force X, looking for something to stop the monster.  The issued ends with Harley finding a portal into the Phantom Zone and discovering that Rick Flag Jr is still alive.

In the backup story, King Faraday recounts how Task Force X set up bases on the Moon and on Satellites orbiting the earth to protect the Earth from alien threats.  Faraday is visited one night by Karin, who gives Faraday a case to hide, stating that people will die and warning him to never open it.  The backup ends with Faraday opening the case and being consumed by a red wave of energy.

Analysis: This is an action heavy issue that rightfully keeps the focus on the Red Wave monster’s escape from the vault and possession of the various members of the Suicide Squad.  Williams does a good job of keeping a sense of dread as the monster escapes and attacks and I appreciated that he didn’t spend any more time than necessary away from the action to keep the atmosphere of the story going.  I do feel that Williams would have done well to tone down the silliness of having Harley and Captain Boomerang continue to spout one liners at the monster as I think they take away from what should be a terrifying moment.  I’m not saying I didn’t find Boomerang’s Ridley Scott references amusing, but it’s a joke that was told in the previous issue and I’m not sure that its one that needed to keep going.

I still find the motivations of Flag Sr. and Karin to be fairly muddled.  If Flag really did intend to kill the Red Wave monster at some point, I still question why that was necessary as the monster was clearly trapped on the moon.   If Flag Sr has been possessed by the Red Wave monster the whole time then why has Karin been helping him fool the squad?  The story makes it clear that Karin has been fighting the monster’s influence until the very end of the issue, so its difficult to see a scenario where she would have just gone along with freeing the monster, especially when the backup story makes it clear that she took steps to prevent that by leaving a piece of the monster’s heart with Faraday. Its confusing and I feel like there was an easier way to get the Suicide Squad to the moon.

As for the reveal of Rick Flag Jr being alive, it was only a matter of time.  It does make me think that in a world where every character has potential to be used in a movie its seems like death in comics has become more meaningless then ever and it takes away a lot of the shock or surprise of this kind of reveal.

Philippe Briones does a decent job with the art chores in the main story, especially with the Red Wave Monster. I have to say I have been enjoying Wilfredo Torres’ art in the back up story.  As unnecessary as I find a story told two pages at a time, Torres’ 60’s inspired art suites the story that its telling well and I’d like to see Torres handle more full-length stories.

Final Thoughts: A well paced and action history issue.  It isn’t perfect, but I enjoyed it.