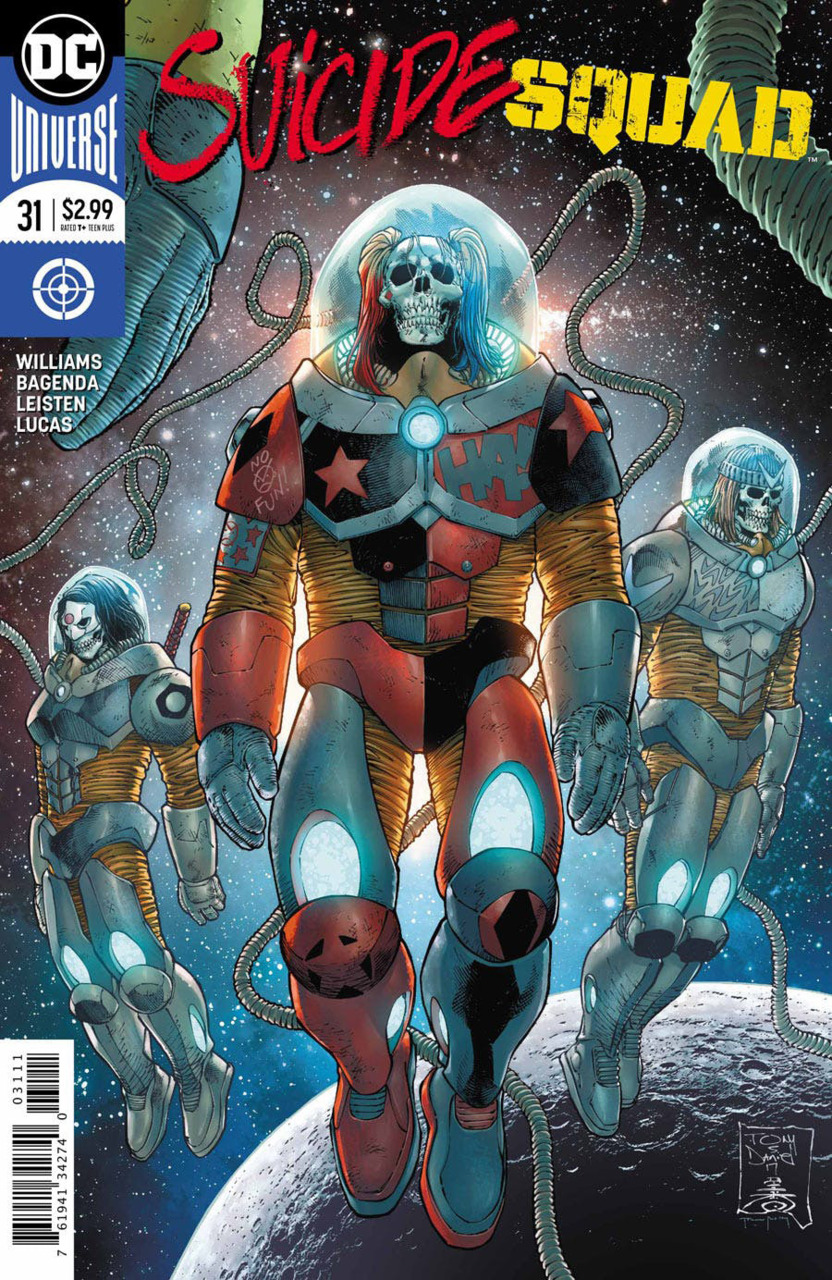 Overview: The Red Wave monster moves closer to earth and the Suicide Squad are reunited with an old teammate.

Synopsis (spoilers ahead): On a forgotten prison on the Moon, Rick Flag Sr, Katana, Killer Croc, and Captain Boomerang have all been possessed by the Red Wave monster, who plans to reclaim the pieces of its heart that are kept on the Argent space station and Earth which are preventing the monster from operating at full power.  They are interrupted by Harley Quin, who is being followed by the ever-expanding gateway to the Phantom Zone, which she opened in the previous issue.  Harley attacks her possessed teammates, and manages to kick Flag Sr into the Phantom Zone.  Flag Sr finds himself free of the Red Wave Monster’s infection and begins aging rapidly.  Flag Sr runs across his grandson, Rick Flag Jr, who had been thought dead.  Flag Sr gives his grandson his space suit and send him to escape the Phantom Zone and save his love, Karin Grace.

Back on the Argent Space Station, Karin Grace receive a message from what appears to be a still alive King Faraday, who appears to have been located in a cave below the Groom Lake Airfield by Amanda Waller and the rest of the Suicide Squad.  King tells Karin to keep fighting the Red Wave monster’s influence as Karin realizes that the monster has reached the space station.  The monster proceeds to eat what it believes to be Karin, but turns out to be the shape shifting Argent wearing explosives which Karin proceeds to detonate, weakening the monster.  Karin then turns on the station’s thrusters to fly the whole station into the sun.

Back on the Moon, the Squad is freed from the monster’s control and find themselves enveloped by the Phantom Zone, only to be rescued by a jetpack wearing Rick Flag Jr, who flies them all out of the Phantom Zone.  Flag and the rest of the team escape on their shuttle and go off to save Karin Grace and the world.

In the two page back up story, King Faraday recounts how he was possessed by the Red Wave monster, leading him to try to destroy Argent and Task Force X to stop it from spreading, and ends with Karin Grace leaving Earth in a shuttle to go save Rick Flag Sr.

Analysis: Not a lot really happens in this issue.  I feel like this story could have been completed in a quick three issue arc and is starting to feel drawn out.  I also have several things I’m not clear about.

In the last issue, Karin Grace seems to be possessed by the Red Wave monster.  In this issue, she’s not.  The issue seems to suggest that she’s fighting off its influence, but still has the will power to detonate her Argent-bomb when the monster attacks.  It’s as if the creative team couldn’t come up with a cliff-hanger to end the previous issue on up the twist that Karin was under the monster’s control, and then forgot about it when they started working on this issue.

How does the Red Wave Monster get to the space station?  Can it fly?  Is it a space faring monster?  Does it teleport?  It’s not addressed here.  It doesn’t appear that any time has passed between issues, so how does it get there?

Karin has a radio conversation with the thought to be dead King Faraday, without any real explanation as to how he his alive or how he was discovered.  It should be noted that Faraday is glowing green and Enchantress is behind him doing some sort of voodoo, so who knows if he’s really back to life or if Enchantress is projecting something using his diary. I guess time will tell.

I also wonder why Harley seems surprised that Rick Flag Jr saves her when she saw him alive at the end of the last issue.  They don’t take any time to address that she’s just discovered that someone she’s been involved with is still alive.

I understand that a major part of a writer’s job in a monthly book is to keep a reader engaged from month to month, and one way to do that is to preserve a sense of mystery, but there’s a point where not explaining things just gets confusing and just makes the reader feel like there are pages missing from the book.  Not showing how the rest of the team came across Faraday is confusing and feels unnecessarily complicated.

On a more positive note, I did enjoy Harley’s inner monologue when she’s being saved by Flag.  As a character, Harley has gone from being a submissive target for the Joker’s abuse to an unstable, but strong, independent character, which is a move for the better for many reasons. However, I do feel like Harley often feels like two separate characters as a result (For a brilliant take on this problem, go read Batman: White Knight).  I do like the inner monologue revealing that she still suffers from some of the same demons that kept her under the Joker’s thumb for so long and I find it fitting that it adds some depth to a character that is often portrayed as shallow.

The art by Barnaby Bagenda in the main book is serviceable, but does have a conspicuous lack of backgrounds, which always feels like a cheat.  All two pages of Wilfredo Torres back up continue to invoke a fun 60’s vibe.

Final Thoughts: This arc has gone on way too long and continues to confuse and frustrate.  My biggest problem with this storyline, is that I just don’t particularly care how they get out of this one.  Do better folks, the readers deserve it.