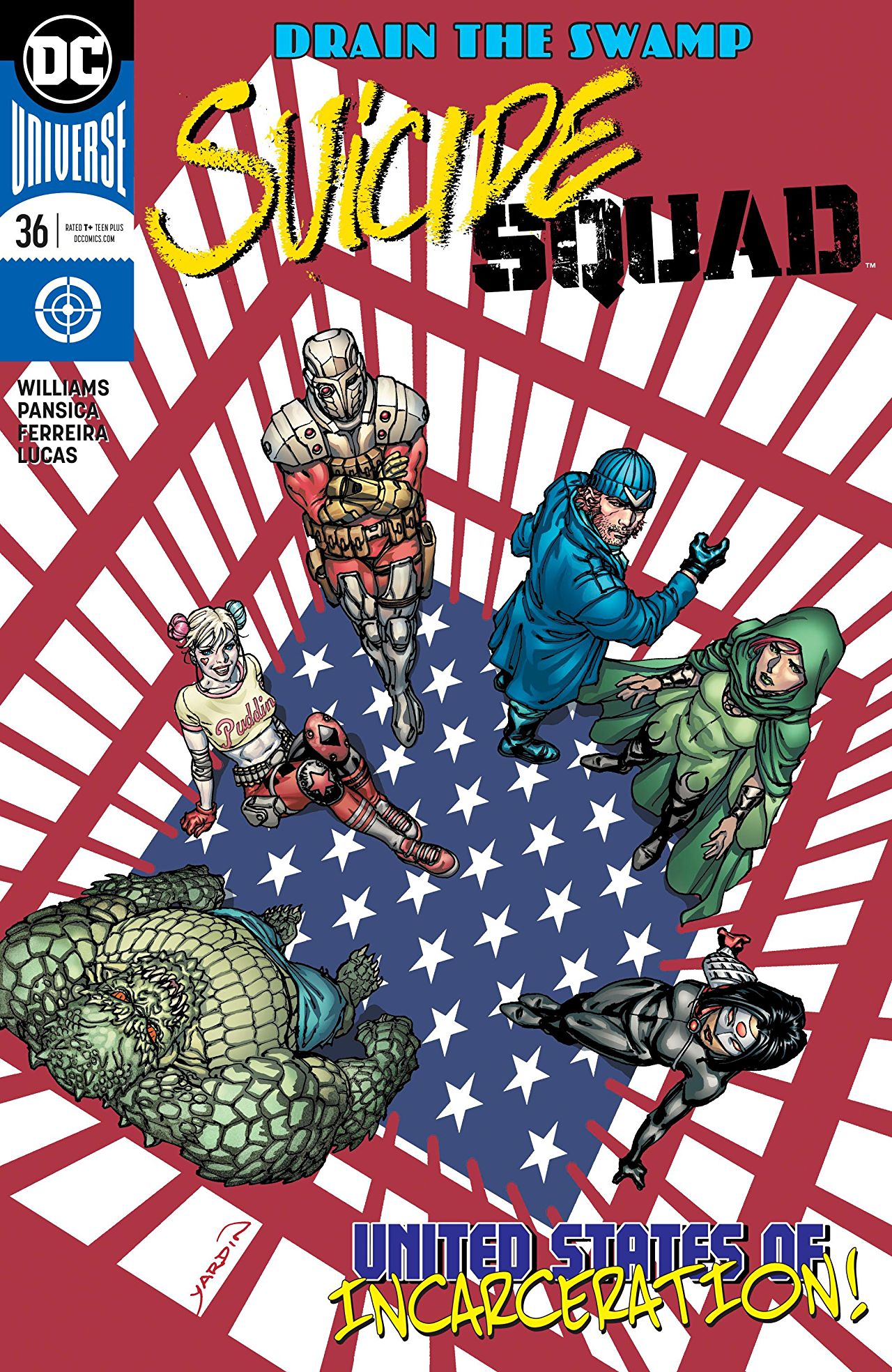 Overview: The Suicide Squad returns to Belle Reve to find Hack in control of the prison and thirsty for revenge.

Synopsis (spoilers ahead): The Suicide Squad returns to Belle Reve Prison to find the prison is in darkness.  Amanda Waller’s voice comes over the radio welcoming the team home, which makes Harley suspicious.  They in a darkened hangar.  The team is then attacked by machinery and electricity fills the room as Hack reveals herself to the team, explaining that she mimicked Waller’s voice on the radio.  As Boomerang looks on in horror, Harley asks Hack if she is still alive.  Hack then projects herself to appear as a young girl, asking the team who murdered her.  Hack then turns back into her usual form and attacks the team with a metal arm, causing them to scatter.   Hack incapacitates the team using their brain bombs and takes control of Deadshot’s bionic hand to take Katana out of the fight.

Nearby, Waller speaks with a soldier and ask for Rick Flag to put his new super soldier, the Wall, into action.  The story then cuts to the Wall taking down a group of human traffickers with some heavy artillery.

Waller gets a call from Hack, telling her that she is opening up all the secret files in the Task Force X mainframe, threatening to release all of Waller’s secrets.  Hack then appears to a group of the other Belle Reve inmates, offering food to King Faraday and June Moon as she knows they did not have a hand in her murder.  Hack then speaks to Faraday, recapping quickly her joining the Suicide Squad and her murder, and how her consciousness survived in the Task Force X mainframe.  Hack takes control of Killer Croc via his brain bomb and has Croc savagely murder the other inmates in the room.

Hack then unveils the Suicide Squad, hanging in the Belle Reve server room, telling the team if they give up her killer she will let the rest of them live.  Waller makes a call to Hack, warning her to surrender which Hack refuses.  The issue ends with Waller detonating bombs within the server room, with the team still inside.

Analysis: This issue moves very quickly and was fairly entertaining.  The team arrives and is taken down without much of a fuss by Hack.  There are no real surprises in this issue and feels like more of a recap issue, to get readers up to speed on who Hack is and why she is so angry with the Suicide Squad. The “Ghost in the Machine” return of Hack feels a long time coming, as back in issue #13, Hack is stabbed through the heart by Boomerang as her body starts to digitized.  Don’t get me wrong, it’s a fitting way to bring this particular character back, and her anger feels justified, but it isn’t exactly a shock.

The issue has a few fundamental flaws for me that drag the story down.   While I appreciated that the last issue dug into the personal costs that Amanda Waller’s choices have cost her, it feels like a missed opportunity to not have Boomerang be the focus in a story of Hack’s return.  This is literally a ghost from Boomerang’s past that has returned to haunt him.  Other than a bathroom joke and a few panels that show Boomerang with a worried expression on his face, Boomerang offers very little to this story and is mostly in the background.    Boomerang has essentially been portrayed as a selfish and fairly despicable character and I think there is some ground that the book could have found to cover in exploring how an irredeemable character deals when confronted with the terrible things they have done.

This is a team of selfish, amoral killers without a shred of loyalty between them.  I don’t for a second buy the idea that no one on the team would give up Boomerang to Hack to save their own skin.  This is a team that continues to return to the status quo of a group of characters that have been forced into working together.  There has never been a moment where the team has banded together or formed any sort of real bond.  There has never been a moment for any sort of loyalty, so the team not serving up Boomerang on a platter sticks out like a sore thumb for me.

Eduardo Pansica’s art continues to be a little better than the book deserves.  Pansica does a great job at making each character look like an individual as opposed to some other artists who just draw the same face with different hair and clothing.  I do feel that some of his action sequence work comes off as a bit rushed.  I’d like to see what Pansica would do with more time, like a special or one-shot graphic novel.

Final Thoughts: This issue was, just fine.  It did its job in moving the story forward, but story problems keep it from being more than that.   I do however like the idea of all of Waller’s secrets either exposed and destroyed, and for a book that I feel has played it far too safe over its run so far, I think there is a real opportunity to hit the reset button and do something new with this title, but we will have to wait till next issue to see if the creators are willing to push it.