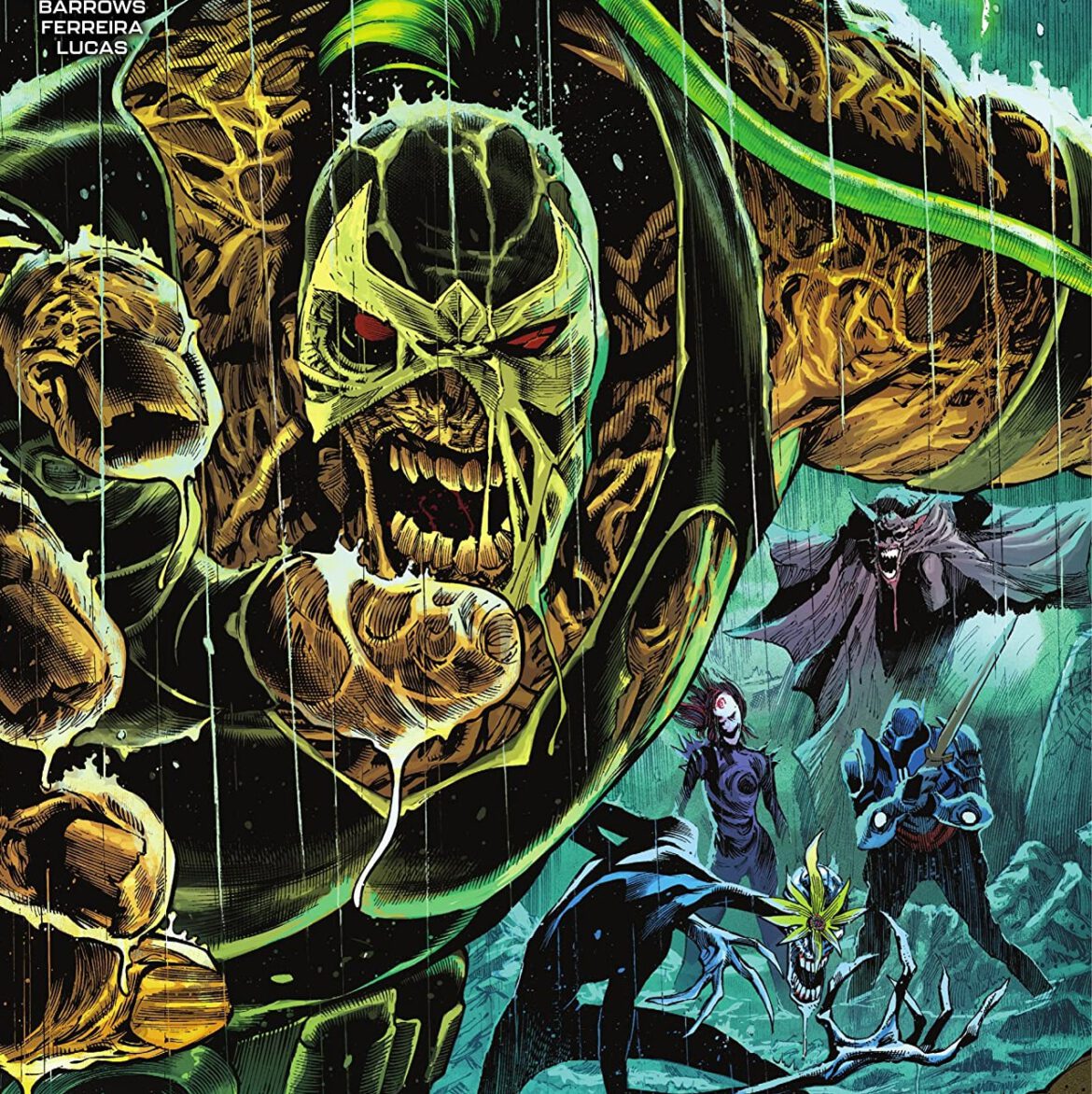 Overview: In Task Force Z #2, the team, led by Red Hood, arrives at an abandoned theater to meet a new teammate, only for things to go terribly wrong.

Synopsis (spoilers ahead): Task Force Z #2 begins in a warehouse in Gotham City, as Red Hood fights desperately to free himself from the ice that’s pinning him down as the Arkham Knight crawls closer, jaw gaping, and ready to eat the pinned hero.

Calls to Bloom, or anyone else on the team, aren’t answered by anyone except Crispin through their communicators, who demands to know what’s going on. The response back is succinct; Bane and Man-Bat are dead, well, dead-er, Bloom is gone somewhere, Jason is frozen solid, and the Arkham Knight is about to eat him for dinner.

Outside of the warehouse and leaving a trail of blood behind of him, Mr. Freeze stares up at Bloom, promising money in exchange for salvation. Bloom isn’t interested in being on Mr. Freeze’s side. In fact, as he slams his hand over Freeze’s face and Lazarus Resin pills spill forward, Bloom informs the villain that he’s always preferred to be on his own side.

Once back inside, Bloom lures Arkham Knight away from the still-trapped Red Hood by spilling over boxes packed with more Lazarus Resin pills. The ploy works, and Bloom is then able to free Jason from the ice and gathers the heads of Man-Bat and Bane. Their mission is over.

Later at the Chop Shop (Task Force Z’s headquarters, or prison, depending on who is asked) Dr. Shelley ambushes Jason after his shower and tells him that Crispin would like a word. On speakerphone with the ever-mysterious Crispin, Jason tells him how he really feels. He’s over this whole team-up-with-undead-villains thing and is ready to quit and tell the Gotham Gazette just what everyone at the Chop Shop is up to.

For everyone involved, Jason and his team, Crispin says that would be an ill-advised move. Walking into another room as they speak, Jason looks in shock at the newly growing bodies of Man-Bat and Bane. They’ve both been somewhat revived, thanks to the powers of the Lazarus water.

Pushing the door open roughly on his way out, Jason runs right into Astrid Arkham, looking much more human and alive than the last time he saw her. Jason assumed she’d be in a secured wing in the headquarters, but the Arkham Knight informs him there’s no point in trying to prevent her from leaving. After all, without the medicine, it’s not an escape, it’s suicide.

Watching her depart, Jason tells Crispin that he isn’t doing one more mission until he gets someone he can actually trust to watch his back.

It just so happens to be Jason’s lucky day, because Crispin already has someone in mind. Soon, Jason and his team, including Hanna Hobart this time (an old-time inmate of Arkham Asylum), enter into an abandoned theater, only to find it not so abandoned. The Kobra Cult has decided to gather there this evening, and the presence of Task Force Z doesn’t go unnoticed.

The ensuing fight leaves bodies strewn about the floor, Task Force Z down a team member when Bane falls through the floor, possibly two as Bloom has once again mysteriously disappeared during the chaos, and Hanna Hobart reveals the demonic entity that lives inside her, which easily finishes off the remaining Kobra henchmen.

In a room in the back of the theater, Bloom calls out to Jason. He’s found their man, who lies supine in a coffin.  It’s a man who looks an awful lot like Deadshot.

Jason calmly turns around and radios Crispin, revving up to give him an earful. Before Jason is able to communicate his problem with this whole situation with Crispin, he’s shot through the back as the previously-assumed body arises from the coffin as Jason collapses to the floor.

Analysis: Author Matthew Rosenberg artists Eddy Barrows and Eber Ferreira present a strong follow-up issue to their first with Task Force Z #2, moving the story along at a solid pace while maintaining a gritty and dynamic mood. Picking up where the first issue left off, Jason is pretty stuck, frozen solid from the waist down, while the Arkham Knight, deranged and only interested in eating him for dinner, lurches ever closer.

Their only other remaining team member, Mr. Bloom, arrives in time to distract Arkham Knight with something more appealing than human flesh; Lazarus Resin. The panels before that, Mr. Bloom’s interaction with Mr. Freeze, seems like its introducing another layer to the story’s plot. What is Mr. Bloom up to, and why does this happen to Mr. Freeze? Clearly, Jason isn’t the only one who doesn’t want to play by Crispin’s game, whatever it is. (As a final comment on this part of the story, I was expecting to have a bit of a follow-through with regards to the fact that Mr. Freeze had his hands on crates full of Lazarus Resin. That point seemed to be glossed over, although hopefully that will get explained in future issues.)

Later, at the Chop Shop, it’s revealed that the powers of the Lazarus pits, mixed and blended with the right science, technology, and funding, don’t just have the power to bring someone back from the dead but to create a new body as well. It’s obvious this doesn’t sit well with Jason, and the end of Task Force Z #2 is setting the story up for a very interesting next issue.

Jason is shot through back at close range and then collapses to the floor. If the Lazarus Resin is used to keep him alive, how might that change his thought-process with regards to Task Force Z? Was it a lucky shot, or planned by the mysterious leaders of the Chop Shop? Dr. Shelley had told Jason that he is part of their experiment, so is this just one way of discovering some results? Needless to say, I’m very intrigued to see what happens next.

Overall, this series is shaping up to be something fun, different, and interesting. There’s a blend of characters, from new ones like Hanna Hobart to classic Batman villains like Bane and Man-Bat, and others that have yet to be made known, like Crispin. Jason’s character is well-written; his dry sarcasm pitted against Crispin’s aloof remarks aren’t done in poor taste and balance neatly. The Lazarus pits, while referenced and heavily used throughout comics, haven’t quite been fully fleshed out regarding their mythos and capabilities, and this series has the potential to insert something new into the world of DC Comics.