Twisted Sister: A History of Beth “Alice” Kane (Part One) 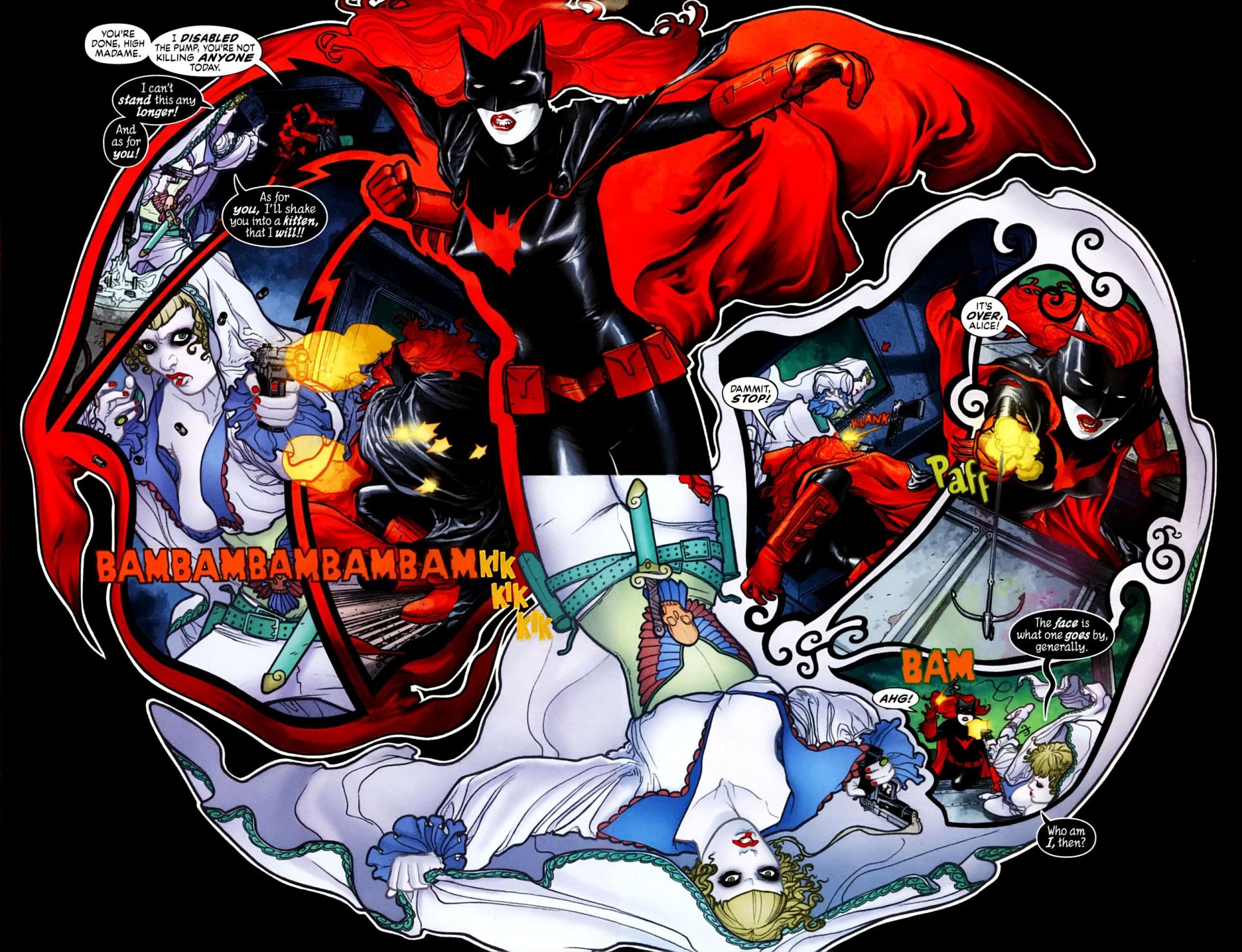 The latest Batwoman arc—by Marguerite Bennett, Fernando Blanco, and John Rauch—recently last Wednesday, with Batwoman Vol. 2 #16. And at the center of that awesome and fiery arc, entitled “The Fall of the House of Kane,” was Batwoman’s biggest arch-rival, her own flesh-and-blood—twin sister Elizabeth “Beth” Kane aka the super-villain Alice. Much has been said and written about Bruce Wayne’s amazing cousin Batwoman Katherine “Kate” Kane, but a closer examination of her twisted sister Alice—originally created by Greg Rucka and JH Williams III—proves a bit harder to find. So, let’s take a closer look, shall we?

First off, I should mention the big difference between the Modern Age versions of Kate and Beth Kane versus current iterations (The New 52/New Age aka Rebirth Era). Their relationship (along with their dad Jake’s relationship) to Bruce Wayne was always vague and confusing in the Modern Age. In the Modern Age, Kate and Beth were distant relatives of the original Bat-Woman Kathy Kane, but directly unrelated to Bruce. The New 52 not only made Kate, Beth, and Jake’s places on the family tree crystal clear, but it upgraded their connection to the Waynes as well. Batwoman #25 (by Marc Andreyko, January 2014) strongly implied that Bruce’s mother Martha Wayne (née Kane) had four siblings: Philip Kane, Jacob “Jake” Kane, Nathan Kane (who was once married to Katherine “Kathy” Webb), and an unnamed sibling that was a parent to another cousin, former Bat-Girl Mary Elizabeth “Bette” Kane. In the Golden and Silver Age, Bette was always said to have been the niece of Kathy Webb (used to be “Webster” back then), which always implied an unnamed Kane sibling as her progenitor. Detective Comics #939 (by James Tynion IV, October 2016) confirmed that Jake and Martha were siblings, officially defining Bruce, Kate, and Beth as first cousins.

By the time the New Age/Rebirth Age rolls around in early 2017, we get further details that allow us to fully understand the Wayne-Kane family tree. It was already long established that Elizabeth “Betsy” Kane and Roderick Kane were the patriarch and matriarch of the Kane side of the fam, and there’s no change there for Rebirth. Moving on, in Detective Comics #975 (by Tynion IV, April 2018) and Detective Comics #978 (by Tynion IV, June 2018), it is confirmed that Martha has only three brothers: Jake, Nathan, and Philip (also sometimes spelled “Phillip”). Since there’s no unnamed fourth Kane brother, Bette Kane, while never fully confirmed, is likely Philip’s only daughter (with an unnamed partner). We can further infer this due to hints gleaned from Nightwing Vol. 4 #27 (by Tim Seeley, October 2017), Detective Comics #967 (by Tynion IV, December 2017), and the aforementioned Detective Comics #978. Kate and Beth are the twin daughters of Jake and his wife Gabrielle aka “Gabi.” After Gabi dies, Jake marries Catherine Hamilton. And Uncle Nathan never has any kids, but he does marry Kathy Webb, who takes the Kane surname, becoming Kathy Kane. After divorcing Nathan, Kathy becomes, among many other things, the first Bat-Woman and Bruce’s lover. In any case, the first cousins are Bruce Wayne, Kate Kane, Beth Kane, and Bette Kane. Now that we’ve sorted out the family tree of a tribe that has way too many variations of the same few names (there are three Katherines and three Elizabeths for crying out loud!), we can move on. We’ll first look at Beth Kane in the Modern Age, where she originally was born. As fleshed-out in Detective Comics #854-858 (by Rucka, Williams III, and Dave Stewart, August-December 2009) and also later referenced in Tynion IV’s Detective Comics #975 nearly ten years later, Alice’s origins begin at a young age. Army colonel Jake Kane takes a NATO gig and moves his family, including Gabi and the young twins, from Gotham to Brussels, Belgium. There, the Kane family lives happily until becoming the victim of a terrorist kidnapping. Kate, Beth, Gabi, and their chaperone Carol are held for ransom. Jake leads a rescue mission, but it gets botched. Horrific tragedy occurs. Kate is saved, but Gabi is killed and Beth goes missing. (Beth is incorrectly presumed dead.)

Mentally broken, Beth grows into adulthood, but keeps herself hidden from her family. Eventually, she joins The Religion of Crime, becoming the High Madame of the organization. Obsessed with Lewis Carroll, Beth changes her look dramatically, becoming “Alice.” You’d think the DCU already has enough Lewis Carroll-inspired characters (and you’d be right since there’s multiple Mad Hatters and an entire Wonderland Gang of Carroll-inspired villains), but Alice takes it to a whole new level. Modeling herself as an unhinged Steampunk version of Alice from Alice’s Adventures in Wonderland, Beth, upon her debut in Detective Comics #854—and much to the amazement of some fans and chagrin of others—would only speak in actual quotes from Alice’s Adventures in Wonderland! In Detective Comics #854-860 (by Rucka, Williams II, and Stewart, December 2009-February 2010), Batman (Dick Grayson, at the time) introduces himself to Batwoman (Kate Kane) for the first time and they discuss the fact that the Religion of Crime has a new leader: the mysterious Alice. (Note that, in the New 52 and Rebirth Era, Batman isn’t a part of this item.) Batwoman gets debriefed by her father Jake, who also happens to be her mentor and field operations leader. Ready for action, Batwoman infiltrates a high-profile Religion of Crime gathering and confronts Alice. They fight, and Alice drugs Batwoman with a poisoned razor blade. An intervening Kyle Abbot saves Batwoman from Alice. Jake Kane then nurses Batwoman back to health. Not long after, Alice and her Crime cultists kidnap Jake. Eventually, Batwoman and Kyle Abbot save Jake and stop Alice from dropping a deadly chemical payload over Gotham. Batwoman fights Alice aboard an aircraft and the latter does her Darth Vader reveal, telling Kate that she is Beth. But unlike in Empire Strikes Back where Luke falls, the villain falls to her death. (Don’t worry, Alice will be back!) Batwoman takes a blood sample of Alice (which is splattered on her costume) to a DNA testing lab to find out the truth. The results come in positive.

We next see Alice in Batwoman #17-20 (by Williams III, W Haden Blackman, Stewart, et al, April-July 2013). Williams III graduated from gorgeous art duties to writing as well. In this arc, entitled “This Blood is Thick,” Mr. Bones is now in charge of the US Government’s Department of Extranormal Operations (DEO). Batwoman, now working for Director Bones’ DEO, has just gotten engaged to Maggie Sawyer. Along with her new sidekick Hawkfire (Bette Kane’s new moniker), Batwoman has also just defeated the global criminal organization known as Medusa. Chase and Bones track down a mystical Religion of Crime sarcophagus. Guess who’s inside—and alive and well? Beth! She’s been miraculously resurrected by the Medusa hoodoo. Batwoman #18-19 continues the story, showing Batwoman and Hawkfire take down Mr. Freeze—with Batman (Bruce) coming to clean up the mess. Batman and Batwoman argue as the former demands Mr. Freeze’s freeze-gun. Batwoman breaks it in two and gives the Dark Knight one of the halves. Later at DEO HQ, Cameron Chase and Bones discuss how their agent, Batwoman, has gotten increasingly more and more disobedient as of late. Hoping to reassert his hegemony, Bones decides it’s time to reveal the ace up his sleeve: the captive Beth. Going in and out of her Alice character, Beth meets with her sister and hugs her in a warm embrace. Bones tells Kate that they can cure Beth (and will release her), but only if she (Batwoman) delivers Batman to them on a silver platter. Batwoman reluctantly agrees. Unknown to all, Bones interest in Batman is a false front for a deeper conspiracy. Bones has mistakenly come to believe that his father is Jake Kane. Despite the fact that Jake is not really his pop, Bones is obsessed with the idea and has come up with a plan to use DEO resources, under the guise of finding out Batman’s secret ID, to get revenge against the Kane Family.

Join me for the in two weeks for the second installment of Twisted Sister: A History of Beth “Alice” Kane, where we pick up with the New 52 continuation of “This Blood is Thick,” which gets a bit screwy due to an unfortunate clash between creators and editorial that leads to an even more unfortunate dismissal/departure from the title.