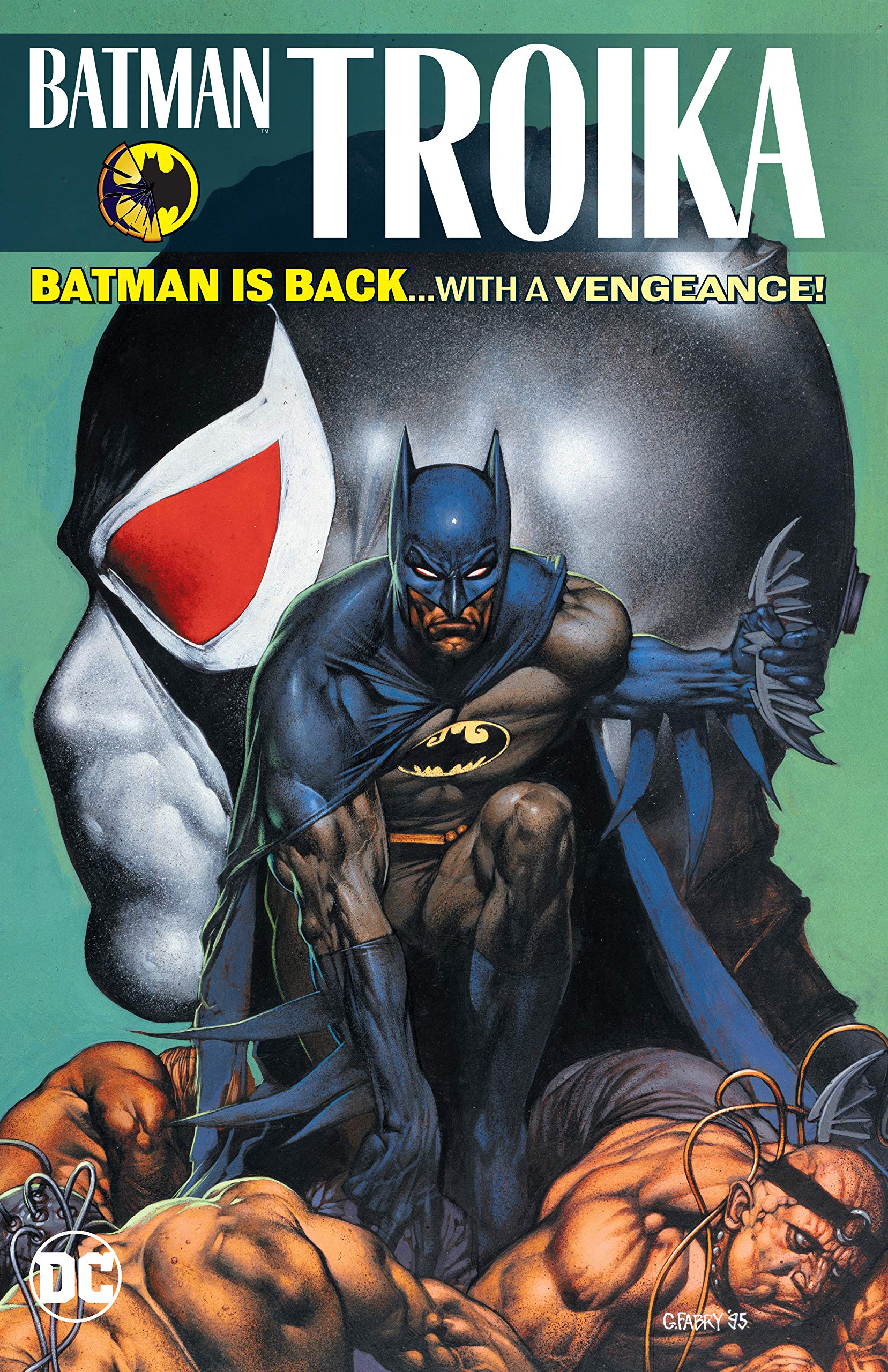 Editor’s Note: This time around we are reviewing Batman: Troika as a new collection in a trade paperback format is releasing tomorrow in comic stores. While not a review of the new edition itself, this is a review of the story as a whole rather than the individual issues as the site typically reviews.  You can pre-order your copy of the new release by heading over to Amazon.

Synopsis (spoilers ahead): The beginning of Troika starts with a secret meeting between the Russian mob of Gotham and some Russian terrorists who are arguing about what to do now that the Soviet Union has collapsed. Col. Vega, Romana and KGBeast have formed there Troika and want to turn Gotham City into there own personal money making center. The former KGB agent Cossack, now calling himself “The Dark Rider”, however, wants to finish the original mission to destroy Gotham and then all of America.

Flash to the Batcave where Bruce Wayne has returned as Batman, while Nightwing and Robin worry about his new look.

We head back to Cossack in his apartment while he rambles madly to himself, showing just how poisoned his mind and body are from the plutonium he carries and how it is slowly killing him.

As we join Nightwing and Robin discussing this new Batman without the aid Alfred (Alfred having left during Knightfall), Batman brings the recent Russian crime to there attention as the phone rings. Lucius Fox calls telling Bruce he is being extorted by the new Russian Troika. Batman rushes to Gordon’s office to acquire all the information he can get on the new Troika and is informed that a small nuke is possibly in the city. After reflecting about what happened to the Dark Rider, they determine that he would have severe radiation sickness and is dying.

Back to the Rider, we see him heading out playfully tossing a baseball up and down making the deadly nuke seem like an American toy. The Troika agree the Dark Rider must fall to be replaced by KGBeast.

As Batman and Robin start patrolling the city, they head to Little Odessa and arrive just in time to save Ari’s bakery from some intimidation from the mob. Batman takes the mob thug down and rings the location of the Dark Rider out of him. After getting the information, Batman and Robin capture the Rider. After the quick battle with the sick Dark Rider, they discover he doesn’t have the nuclear device and the Troika may still have it.

The second part of Troika starts with the Dark Rider rambling to Batman and Robin about his grand plan to destroy America. After knocking the Rider out, the duo swings off and plan to split up while Batman does more digging into the gang. Robin heads off to check in on his love interest Ari. While searching for answers, Batman gets a sharp reminder of his actions from Knightfall in choosing Jean Paul Valley to be his successor.

As the Bat hunts for clues, the Troika discuses what to do about the Rider, who is currently in Blackgate in a coma from the radiation poisoning. Unknown to the trio, the baseball-sized bomb is sitting right above there heads as they argue how to take over America slowly or have one giant money grab from Gotham.

The next day after a quick look at how utterly helpless Bruce Wayne is without Alfred, Batman and Robin go back to work for the night hunting for the Russian gang and the bomb. After leaving Robin, Batman catches up to Col. Vega, only to be ambushed by the mind control agent and his “mental technicians” team. Batman quickly realizes he can’t beat the mind controlled group of muscle-bound men and plays possum. As Vega has his men bring Batman to him, Batman grabs and smashes the mind control device confusing the team which leads to a quick victory for Batman. As Vega escapes out the back door he is surprised and shot dead by someone from the Troika, but hidden from view. Batman is left with the body and a clue involving Lucius Fox’s business card.

The third part of Troika starts with Batman falling from his grappling line because of the effects of Vega’s mind control device. Robin barley saves his mentor by throwing a line around Batman’s foot as he falls into a billboard. After a brief discussion on how the case is coming, Batman decides to check in on his private life and leaves after joking with Robin about taking the stairs.

Skipping over to the Russian hideout, Romana Vrezhenski is punishing her men for not finding the nuclear bomb yet. As she roughs her men up for failing, she knocks some boxes around and the baseball masked bomb falls. It happens to be caught by KGBeast who seems to know instantly what it is, but keeps it for himself.

The next day, Bruce is visiting Lucius Fox as Romana barges in with her men to strongarm Lucius into giving her a cut of Wayne Enterprises profits. After dismissing Bruce as a nobody, Romana demonstrating to Bruce and Lucius what the Troika is capable of by destroying a large part of Wayne Chemicals. As the gang leaves, Bruce makes sure Lucius leaves the city to ensure his family’s safety.

After checking in on Ari and her family, Tim leaves to get back to work by helping with the fire at Wayne Chemicals. As the police arrive at the fire, Bullock and his new partner Mackenzie Bock search the property to find the culprit with Robin watching over them. As they confront KGBeast, he knocks Bullock out and shows Robin that he has the bomb. On the other side of the city, Batman ambushes Romana and her men who have come to pressure Lucius again.

The conclusion of Troika shows Robin standing off against KGBeast in the midst of a chemical plant fire and also saving Bullock with an assist from Bock. As Robin battles KGBeast to keep Bullock alive, Robin injures KGBeast’s cyborg eye causing him to throw the nuclear bomb into the air. Conveniently, it is caught by Batman who just arrived after taking care of Romana and her men. The next day Lucius Fox and family arrive to find there home being repaired, with the Fox family none the wiser that they were ever in danger from the mob.

The other two parts of the collection form an epilogue of sorts for the story. Alfred is seeking out his old love interest Joanna in the London theater district. Nightwing, who has followed Alfred to London foils a robbery and approaches Alfred to plead him to return to Gotham City. After Alfred’s former love claims that her son is Alfred’s son as well. Ultimately, it was all a ruse and Alfred agrees to return to Gotham with Dick.

The final story shows how Bane has spent his time in prison after the events of Knightfall and his eventual escape.

Analysis: Troika was written by Doug Moench, Alan Grant, and Chuck Dixon and it has both good and bad parts. First, the problem with any Russian villain from the nineties is they are written to have broken English most of the time, the characters seem dim-witted and shallow. KGBeast seems to be just a knock-off of Bane but with all of Bane’s personality stripped away and turned into nothing more than a thug with Swiss army weapon strapped to his arm. Col. Vega seems to be nothing more than a Russian version of Mad Hatter without any style. Romana tries coming off as a smart and effective leader, but ultimately all she does is demand and strut around without providing any actual plans to become a mob boss.

The only villain that you can really believe would work in this world is the Dark Rider. Someone willing to poison themselves with radiation just to destroy his government’s most hated enemy is far more believable then Russian agents just deciding to form a group without any real plan on how to do it other than randomly strong-arming a part of Gotham.

The side parts of this story arc with Bruce having to fend for himself without Alfred and having to start to mend his and Gordon’s professional relationship save this story from being too boring and predictable. The Alfred issue was also very predictable but the characters were far more believable. Alfred’s interaction with with Joanna and Derek was genuine and sweet. You really get to see a glimpse of the man Alfred was before heading to Gotham and Wayne Manor. The Bane story is a very well written deep dive into Bane’s psyche as he deals with withdrawal and planning his escape from prison by manipulating everyone around him to his will. That is Bane’s true power; his genius in making people follow him without making them feel as if they are nothing but his minions.

The art work by Kelley Jones, Barry Kitson, Adrienine Roy, Tom Grummett, Dick Giordano, and Graham Nolan really makes finishing this story worth it. Kelley Jones gothic poses of Batman, the Troika, The Dark Rider, Nightwing, and Robin, while cartoonish at times, are also powerful rather than being the constant perfection you would normally see in a Batman comic. When Barry Kitson’s takes over the art, he makes the characters sharp and clean as the story progresses and it becomes more serious because of it. His clueless Bruce Wayne is particularly entertaining. The fight between Batman and Vega’s mind-controlled men is a ballet in twenty-six panels and Vega’s murder is a study in the less you see the more gruesome it can be. Graham Nolan’s artwork focuses on a lot of facial expressions and tight space posing for characters which you don’t get to see as much with Bruce Wayne in either Batman or Bruce personas normally you only see a big Bat-Frown. Tom Grummett’s issue seems a little flat compared to the other issues but has more depth with an almost three dimensional-like quality. Rather than all of the characters seeming to be standing on top of each other or next to each other, you notice how far away or how big the area is around them. Dick Giordano’s issue shows just how skillful and powerful an artist can make an English butler. His Nightwing art is action packed without Nightwing exerting himself as much as some artists would draw him.

Final Thoughts: While Batman Troika is a decent read if you are stuck on a bus or an airplane trip. If it was in my collection and a friend never returned it, I wouldn’t be upset. Most of the main villains are flat and a little one dimensional. The two epilogue issues and all the amazing artwork save this collection from being a run of the mill Russian movie bad guy rip-off. But that isn’t to say it still isn’t worth reading. If you want to read more of KGBeast, Alfred’s pre-Wayne history, and a deep dive into Bane’s psyche, I would pick it up and enjoy this post Cold War story.