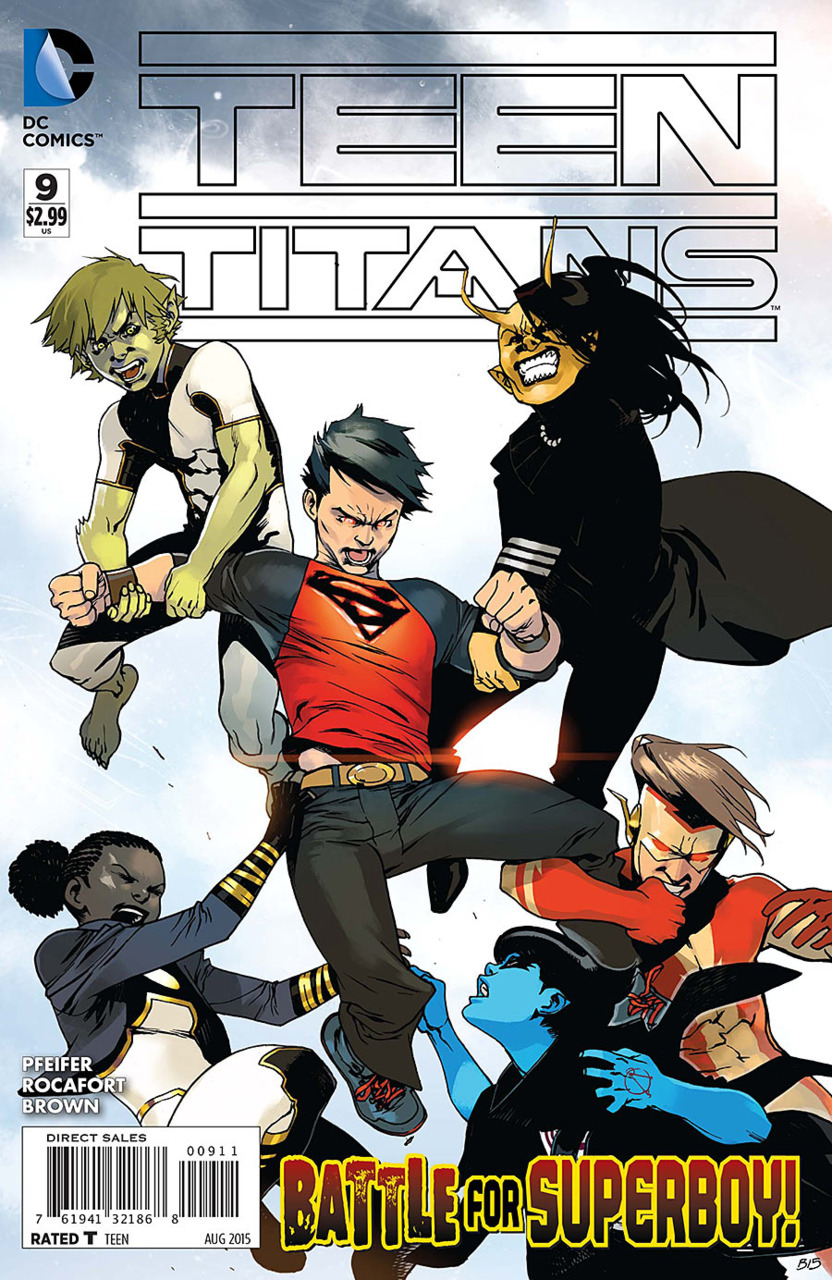 We open on the John Hancock Center in Chicago. Tim and Chimera are on one of the radio towers of the building. Chimera has taken the form of Red Robin, according to her dialog it’s the only way she can focus this high up. She gives us and Tim some exposition that there are no buildings left on Durla after the war. As a result, she is uneasy and when she takes Red Robin’s form, she also draws on his strength, mainly, he is comfortable high up on buildings and as a result, she too is comfortable. After some more exposition about justice and her belief that Superboy did not kill the Durlans as depicted in the previous Annual issue, it is revealed that the two are placing sensors to give them warning if anyone comes looking for Superboy.

Meanwhile Superboy is stretching his legs by flying throughout the city to let off a little steam. Back inside the tower, Tim and Chimera are watching the news reports detailing the mass murder allegedly committed by Superboy. The world has not forgotten what happened and who is believed to be the perpetrator.

In downtown Chicago, Bunker, Gar and Raven are taking a stroll believing they are incognito. Unfortunately, they are not, a group of people recognize the three on the street and want their autographs.

At S.T.A.R. Labs, the top-secret training facility, Manchester Black and a tech are searching for the Titans. They currently have no idea where the Titans are and Black is sure that that will change soon. He believes the team is too unstable and someone is going to do something stupid and Black will be able to find them.

Back on the streets of Chicago the crowd is swelling around the Titans. Raven is having difficulty keeping all the people out of her head and she has the feeling something bad is about to happen. Raven is right; a woman in the pushing crowd fell onto the mass transit tracks with a train bearing down on her. Gar changes into a cheetah to try to reach her but he is unable to move in the swelling crowd. Bunker likewise cannot get a clear angle to try to use his telekinetic bricks to save the woman. With the train almost on top of the woman, she is saved by Superboy. The crowd goes into panic at seeing Superboy; they believe he will kill them like they think he killed the people in Annual #1. Superboy pleads his case that he did not kill anyone while a police officer approaches and pulls his gun (like that is going to do anything). Superboy telekinetically destroys the cop’s gun and the alarms go off.

Both Red Robin and Black separately zero in on Superboy’s location. Black assembles his team. At S.T.A.R. labs Wonder Girl and Power Girl are training and discussing the fact that nothing ever goes according to plan. Black comes in and with the girls are joined by Kid Flash, Guardian, Klarion, and Trinity. The team is to teleport to Chicago while Kid Flash meets them there.

Red Robin calls Bunker for a status report. The only good news is that they found Superboy. Everything else falls in the bad news category. Raven is unable to get the team back to the apartment due to the crowd. Superboy grabs Raven and Beast Boy and with Bunker, they head back to the apartment at according to Gar at mach 2.

Black’s team arrives on the scene and begins to calculate the Titans’ destination. Kid Flash zeroes in on their location and Klarion teleports the Black team to the apartment.

Superboy crashes into the apartment with the Titans. While Red Robin berates Superboy for destroying the wall and making the apartment the least safe place in the Midwest, Black’s team teleports in. In the conversation it is revealed that Kid Flash or Bart as Cassie calls him wants to have a talk with Red Robin. It is unclear what he wants to talk about. Cassie immediately takes the point; she wants to talk to her friends first after they open the door, which she does with a fist. We get face shots of Bunker, Red Robin, Raven, Superboy, and Beast Boy looking at Cassie at the door. She demands that they hand over Superboy now. The next issue will be Wonder Girl vs. Superboy.

I enjoyed this issue despite the fact that it is a set up issue. There are several questions that have come up.

The first question is who is Chimera. She is definitely a Durlan but she talks about being a protector of her people. Is she involved in this situation as a cop? She is adamant that Kon (Superboy) was not responsible for the mass killing of her people. Does she know who is? If not, is she acting as a detective in trying to find out who did? She also wants to restore her people to their rightful place in the universe. What exactly does she mean by that? The last time I saw the Durlans was in the Green Lantern story line “Uprising”. In that story, the Durlans were depicted as the enemy who wanted to destroy the Green Lantern Corps. What is her motive in this story?

What is going on with Raven? This is not the first time that we saw her depowered. In the previous arc she was shown being sick and weak just like she is shown here. Bunker makes an interesting observation in that he says that he has never seen Raven this ill before.

What is Bart’s story? The last time we saw him, he was serving his sentence in the future. Is this the same Bart? If so where is Kiran, his girlfriend and another former member the Teen Titans? What does he want to discuss with Red Robin? If he is not the same Bart, the obvious question is who is he?

The last question is will we see Wonder Girl completely separate from the Titans?

I liked the story and the questions that were brought up. I did not like the art. The characters seem elongated a lot of the times and the facial features do not look realistic. I admit that I want the art to be more realistic.