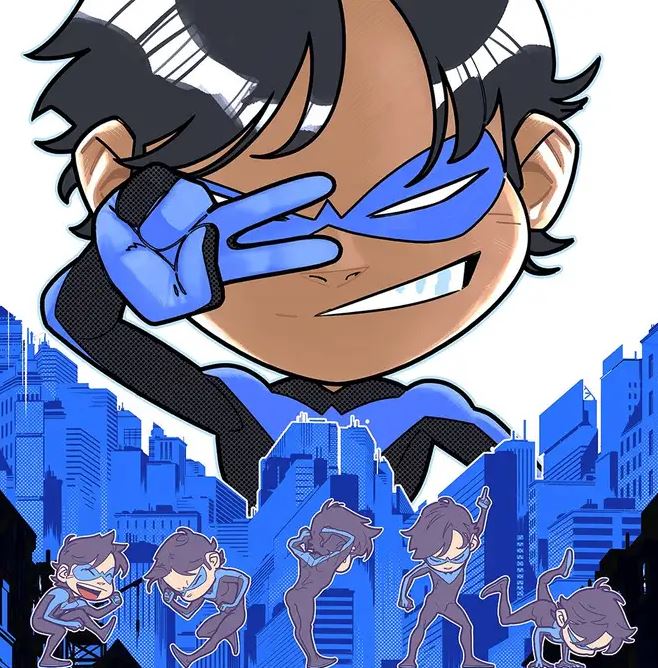 Overview: In Nightwing #98, Blüdhaven’s protector gets his own miniaturized fanboy from the 5th Dimension! Meet Nite-Mite!

Synopsis (spoilers ahead): Nightwing #98 picks up directly after the last issue, and we see Nightwing confront “Ric Grayson” and tell him not to go around using his face for identity reasons. “Ric” instantly transforms into Nightwing, wearing a previous costume from his New Titans days, before revealing his true form as Nite-Mite, an imp from the fifth dimension and Nightwing’s self-professed biggest fan. When Oracle approaches, Nite-Mite comments on their long, drawn-out romance and quickly teleports Dick’s friends and family for an impromptu wedding, with Nightwing and Oracle dressed in a tux and dress. The two quickly protest, and Nite-Mite makes everyone disappear as soon as he delivered them before telling Nightwing that he’s needed for a rescue mission.

Turns out that years ago, Blockbuster sold his soul to Neron, and when the time came to re-up his deal, he bargained with the soul of his firstborn child instead. Now with Desmond dead, Neron’s demons have come to collect her. Nite-Mite powers up Nightwing’s Escrima sticks with a specific incantation and gives Bite-Wing the power to communicate and a matching costume. Together, they arrive in time to save young Olivia, who demonstrates that she’s also inherited Blockbuster’s super-strength.

Afterward, Nightwing calls in Raven to protect Olivia from repeated advances by Neron’s forces. Nite-Mite claims that this was his best day ever, and Nightwing tells him not to devote his entire identity to a single person for fear of being let down. Nite-Mite returns the favor by suggesting that Nightwing replace Blockbuster as the ruler of Blüdhaven, albeit with fewer crimes to strangle the city.

Analysis: Nightwing #98 was a cute, breezy story that speaks to Tom Taylor’s loud love for Nightwing, and it reintroduces the concept of fifth-dimensional imps in the Batman Universe post-Post Crisis.

For those not in the know, the character of Bat-Mite (most recently presented in the animated series Batman: The Brave and the Bold) was an element from the Silver Age that the post-1980s version of DC Comics rejected in favor of more grounded stories and characters. He was invoked in a Legends of the Dark Knight story, illustrated by the late Kevin O’Neill, and the last I’m aware he was only since brought into the comics by Grant Morrison via the Batman of Zur-Enn-Arrh’s drug-induced mania. It seemed that the only way the fifth dimension could be referenced would be if the characters weren’t sure of their own sanity. Because Bat-Mite is a xerox of Mxyzptlk, a mischievous antagonist of Superman who fits more in Superman’s intergalactic adventures than Batman’s street-level world, copying story trends from other characters such as him would feel out of place in 21st-century storytelling (even though Knightfall being a repeat of The Death of Superman has always remained in play). To my knowledge, Tom Taylor is actively bringing it back with this new character, who is part Bat-Mite and part Larry from the 2003 Teen Titans cartoon.

To that point, I wondered why there wasn’t more room given for analysis when it came to Nite-Mite’s presence. We don’t get any of Dick’s inner monologue reacting to the guy, just that everyone knows a fifth-dimensional imp when they see one. Mxy and Bat-Mite are mentioned, but I would’ve liked to have seen a flashback of Dick remembering Bat-Mite’s adventures and how annoying he was to Batman. I wonder if editorial is still a bit shy about reminding fans about that or if there just wasn’t much room to dig into it.

As far as the issue itself goes, it was fun. I love references to Dick’s 90s costume and the breaking of the fourth wall in commenting on the Batgirl romance. The question of marriage has definitely been in the air for the last issue or two since Dick and Babs have stayed committed to each other. What was interesting was Babs being the first one to loudly reject the sudden marriage, then replying to Dick questioning his declaration of “Not yet.” Maybe Babs doesn’t want to get married..? That would be interesting after her speech about happiness two issues ago.

I enjoyed Nightwing #98 well enough, but I think there could’ve been more meat on the bone for a real splashy adventure with the interdimensional concept of characters. The “plot” as it is was razor-thin. Details like Olivia having Blockbuster’s strength and being a big Nightwing fan are ultimately unnecessary, not adding anything to the overall plot. I would’ve also appreciated knowing more about the Nite-Mite fandom of Dick. Did he become a fan watching Bat-Mite bedevil him and Bruce when Dick was Robin? Did he become a fan after Dick became Nightwing? There are some obvious allusions to real-world fandom, and I think Taylor could’ve leaned into that a lot more than he did instead of feigning interest in the kidnapping plot. Also, I don’t know…Nite-Mite as a character really isn’t more than just a boilerplate idea of a fan. The gag about the slapping meme t-shirts was funny, as was him shipping Dick with Starfire, but this could’ve been a real gag fest. Should he come back, I would love a whole issue between him and Bat-Mite arguing who the better hero is and going full-on fan commentary.

The artwork by Daniele Di Nicuolo was fun, expressive, and very anime-like. It’s a good use of modern artistic trends, with Nite-Mite basically being a chibi version of Nightwing rather than a pudgy elf like Bat-Mite. Some of the panels reminded me of Mirka Andolfo’s Sweet Paprika, especially with the demons. I wonder if those provided an influence?

This was good! Not great, but easy fun. It's been almost two years with Taylor on the title, and the average issue has either been solid or really good. The median of quality is always under excellent, but that consistency puts the run as a whole over just a bit. It's always nice to have a comedy issue here and there, and with such an idea as the 5th-dimensional imps, he made it work here no sweat.