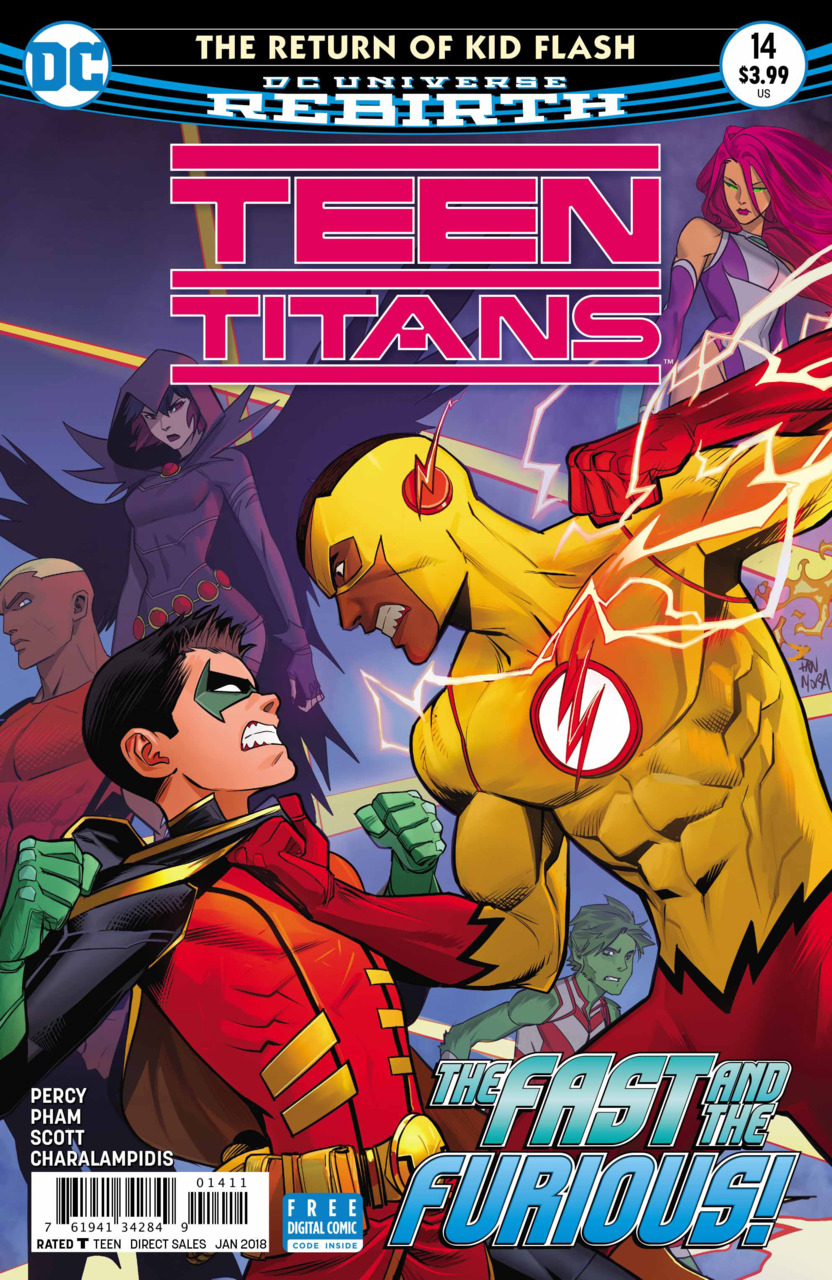 Overview: The arc ends with the return of Kid Flash as Robin learns to accept help and the team bands together to save the city from Onomatopoeia and a catastrophic tidal wave.

Synopsis (spoilers ahead): The issue picks up with Robin and Red Arrow trying to save as many people as possible following the detonation from a bomb planted by Onomatopoeia. With the help of Goliath, the pair begin to snatch civilians out of the water. It becomes very clear that they will not be able to save everyone and they will need help.

Back in Central City, the Teen Titans are still trying to convince Kid Flash to join the team. He wants a full apology from Damian but the group is pretty sure that will not happen. As they are talking, Robin cuts over their com link and asks for help. They realize the situation must be serious for Damian to be asking for help.

Just as the wave is about to engulf Star City and Robin and Red Arrow with it, the team arrives to rescue the remaining people on the coast as well as stop the actual wave. All seems well until Red Arrow realizes that Onomatopoeia only really wants to kill non-metahuman heroes like her and Robin. Just as she realizes this, a barrage of gun fire rains down on the team from a nearby rooftop. Robin becomes enraged when a stray bullet hits Red Arrow’s arm and he charges Onomatopoeia. With the assistance from Kid Flash, the pair are able to finally take down the villain.

While the police arrest Onomatopoeia, Damian and Wally share a moment on the rooftop where Robin tells Wally that they both need to do better, but together on the team. Red Arrow tells Robin that she will be sticking to Star City, but she gives him a kiss on the cheek and tells him she will “see him around”. The entire team wastes no time in teasing Damian about his new crush.

The arc concludes with Tim watching the events unfold from the Batcave monitor. Alfred asks him if he will reveal himself now, but Tim answers only “soon”.

Analysis: As both a concluding issue and an arc, I found both to be very enjoyable. Despite the overall villain to be pretty easily handled, the plot helped to bring the team back together and for some of the them to learn more about themselves. Any time we get to see Damian grow and mature a little has payoff in my opinion.

As a single issue, I really liked the rhythm that Percy established with the big action piece of the tidal wave threatening to destroy the city and then, just as things are cooling down, revealing the true plot of Onomatopoeia drawing the non metahumans out into the open to kill. It helped make the issue feel longer and the payoffs earned. The dialogue between characters is written very well and I can always get a sense for the character just through their conversations.

The artwork here was really solid in this issue and I loved the display of certain Teen Titans’ abilities. Seeing Beast Boy’s transformation into the whale was very impressive to see across the page as well as Kid Flash’s assist to Robin to take down Onomatopoeia. Khoi Pham also drew Damian well which is always a plus in my book when you can capture both the rage of him in battle as well as the very “kiddie” moments when he blushes from a kiss on the cheek.

Final Thoughts: The arc wrapped up nicely and it looks like we got a full squad again. It will be interesting to see where Tim will fit in to the future of the team as hinted on the last page. Overall, I am looking forward to seeing this team come closer together and become more like friends than just teammates.