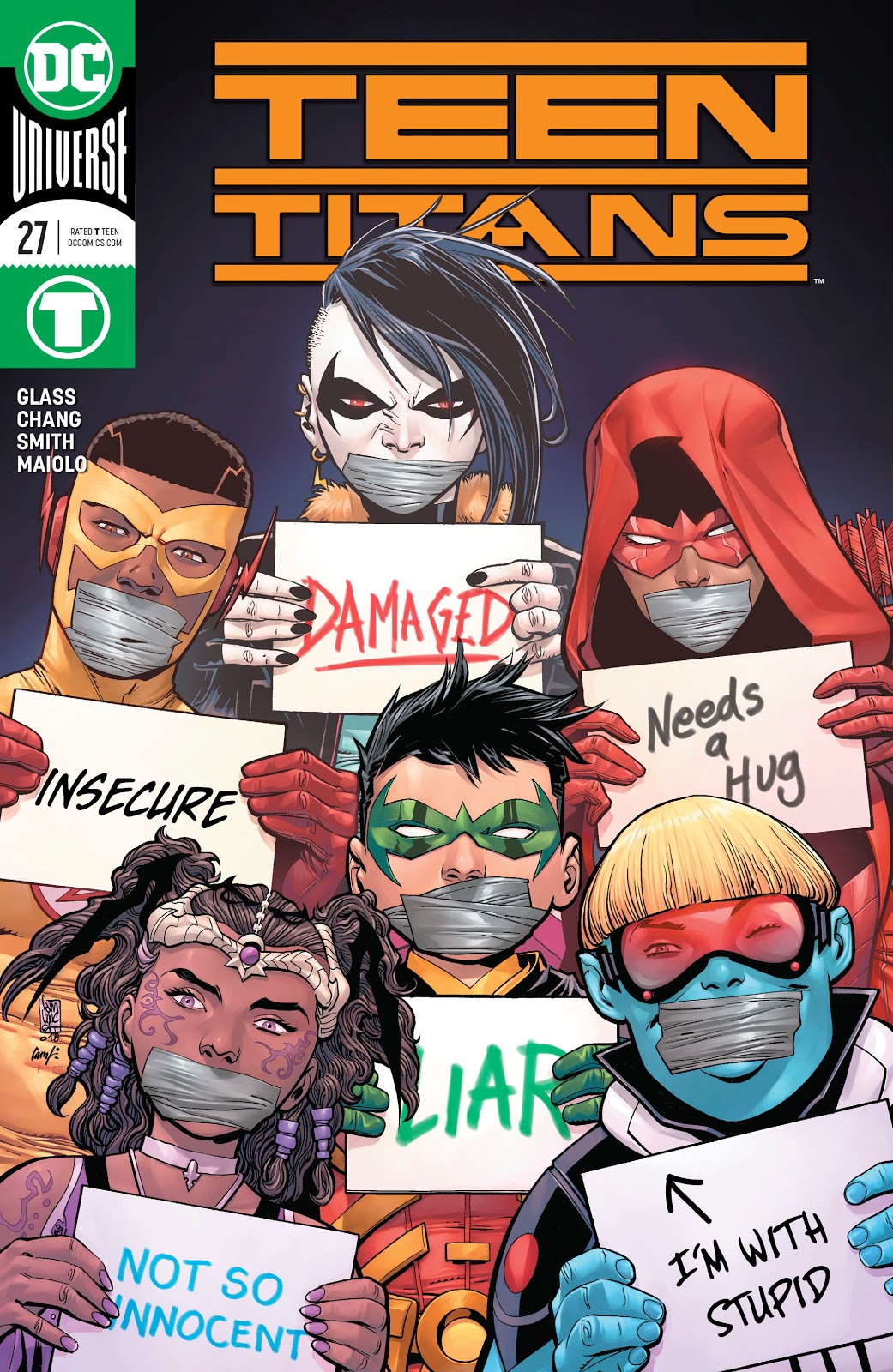 Overview: Kid Flash has dinner at Roundhouse’s place, Red Arrow and Crush seek a way to deal with their anger and Robin and Djinn get to know each other better.

Synopsis (spoilers ahead): Djinn tries to get an injured Robin to allow her to heal his injuries but he’s reluctant to trust her enough to allow her to do that.  Red Arrow pays a visit to Crush and takes her to a pigeon coop on the roof to show her an alternative and healthier way to deal with anger.

Roundhouse brings Kid Flash to his house to hang out and have dinner.  Roundhouse’s mom eats with them and hilarity ensues.

Djinn decides to get Robin to open up by telling him about her dark past.  She explains where she came from, how she was deceived into serving darkness and how that still affects her today.

Crush returns to her room and looks at a wall where she appears to be tracking Lobo with the intent to kill him.

Kid Flash and Roundhouse leave the house and Kid Flash gets Roundhouse to share a bit more about the loss of his sister and the survivor’s guilt he is going through.

Robin decides to trust Djinn and reveals his identity to her.  Robin then receives an alert that Deathstroke has broken out of Arkham.

Analysis: Wow, this creative team continues to deliver amazing stories in this series.  This issue is a perfect example of how every issue doesn’t need an action scene to be good.  Of course, we want to see superhero fight villains, but we also want to see them hanging out and talking to each other about stuff that doesn’t have much to do with being a superhero.  These types of moments allow us to connect with the characters more.

After much anticipation, we get to hear Djinn tell us her story.  It’s a highly sympathetic tale that is rooted in Middle Eastern folklore.  It explains her aversion to control and why she is so scared of using her full power.  Chang and Maiolo’s art really shines in this flashback as it has an “epic” quality befitting a legend that is thousands of years old.

The dinner at Roundhouse’s place was quite funny for me to read.  As someone who was raised in a South Asian home and has many friends who are Asian and South Asian, I can say that what happened in this issue is a highly authentic experience of having friends over as a teenager.  Everything from giving the friend a run-down of the rules beforehand to listening to a parent praise a peer they perceive as more accomplished took me right back to when I was a teenager and I was visiting friends or having friends come over.  Glass ends the night with a very touching moment between Roundhouse and Kid Flash as Roundhouse lets his feelings come through and confesses that he feels survivor’s guilt over his sister’s death.

Going forward, I think Crush is the character to watch because she might do something to rock the boat.  Red Arrow tried to give her a healthier way to deal with her anger, but it seems like Crush is intent on exacting revenge on her father.  Robin and Djinn also seem to have a new dynamic in their relationship and it will be interesting to see if it affects Damian’s judgment in the coming confrontation with Deathstroke.  Also, now that we know more about Djinn’s past, could the mysterious Other also be related to Elias?  The story could go in so many interesting directions and I’m very excited to find out where it goes.

I’ve already mentioned that the art was outstanding for Djinn’s story, but it’s also very good throughout the book.  This series has continuity with the creative team and it’s really showing in how well they work together.  It’s clear that Glass and Chang are on the same page and complement each other to take the book to a higher level.  Let’s keep this run going!

Final Thoughts: An excellent issue of your favorite heroes just hanging out and getting to know each other better.