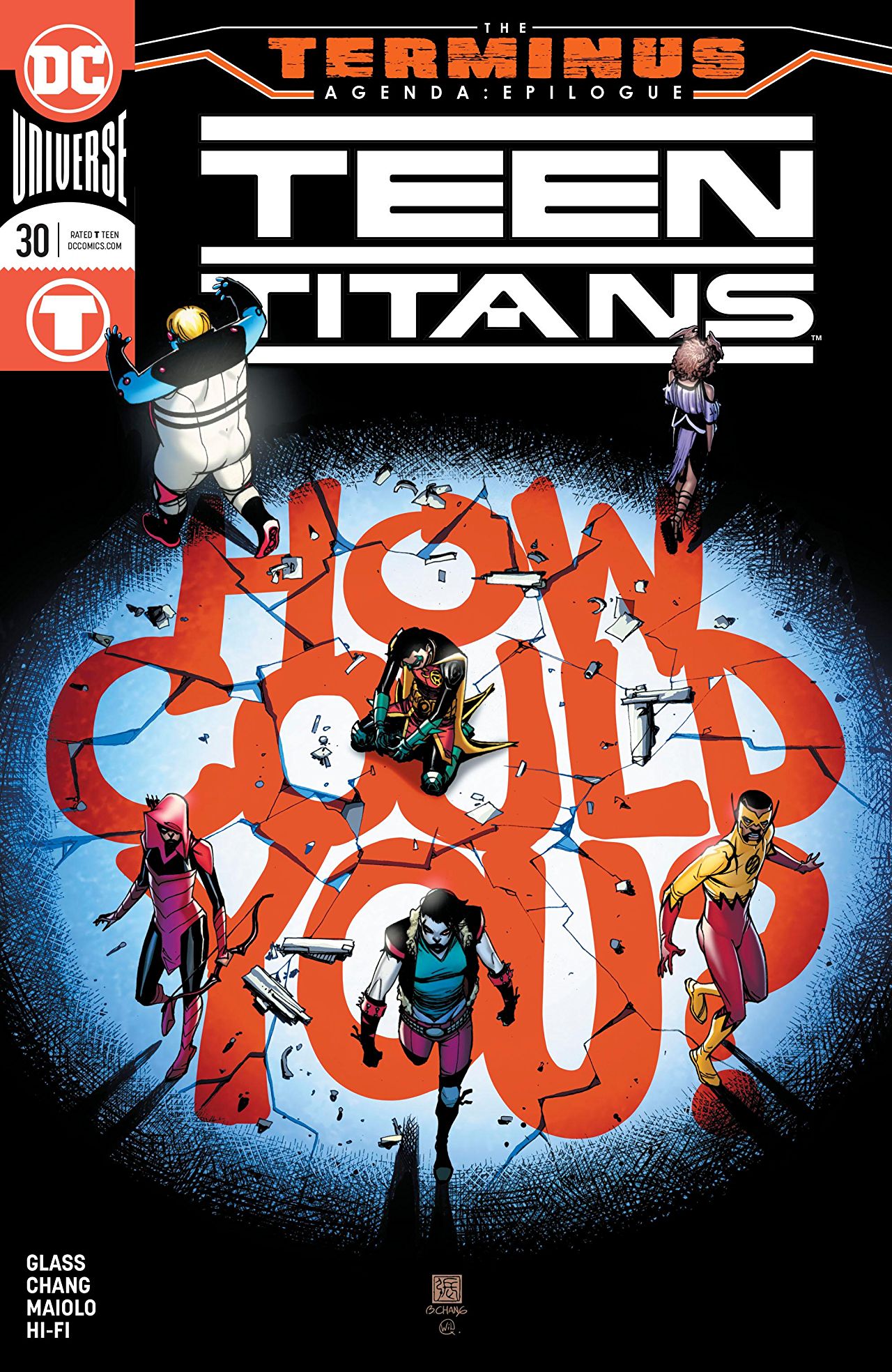 Overview: In the aftermath of the Terminus Agenda showdown with Deathstroke, the Teen Titans fracture.

Synopsis (spoilers ahead): At the Teen Titans base Mercy Hall, the morning after Red Arrow shot Deathstroke through the eye socket and killed him, she cleans the blood off the roof. Robin and Kid Flash approach, trying to talk to her, but before they can make any plans, the rest of the team confronts them, both about murdering Deathstroke and about Damian’s secret prison. Djinn and Kid Flash advocate letting the villains free, but Emiko and Damian oppose the plan. Though Djinn and Robin attempt to connect, they fail, and the meeting devolves into a brutal fight. Just as Djinn breaks up the brawl, Crush’s father Lobo arrives, much to everyone’s chagrin.

Analysis: After the tragic, dramatic, and humorous Terminus Agenda crossover with Christopher Priest’s Deathstroke title, this issue serves as a transition to the next arc, presumably dealing with Crush and her father. Sadly, like the last issue, writer Adam Glass seems to be padding the story with fairly cyclical and unresolved fight scenes. Though his dialogue is quite strong, with connections being made between the characters, particularly Djinn and Robin, and the dynamic between the veteran heroes Robin, Red Arrow, and Kid Flash and their three newer counterparts quite engaging at times (seeing the alliances and bonds wax and wane is particularly fascinating), the whole issue should have been the introductory pages of the actual first issue of the next arc, seeing as none of the issues brought up were actually solved and nothing really changes from the beginning to the end of the issue aside from Lobo’s arrival and the destruction of the base. It’s particularly frustrating that since DC or Glass made the call to let Red Arrow kill Deathstroke instead of the more logical Damian, that particular issue is just mentioned and then ignored in favor of the conflict about the prison, and Red Arrow is probably the least developed of the characters in the issue, despite having the most potentially interesting internal conflict and opportunity for growth.

Bernard Chang provides strong lines and pleasing compositions, rendered a bit garish by the coloring. The use of geography of the base, particularly in the opening and the fight scene, is really nice – thoughtful and dramatic.

On the cover, Bernard Chang’s main image uses a strong composition of the team walking outwards from Damian, but the large red letters slightly cheapen the impact, especially since, as in the issue, Red Arrow, who made the most dramatic choice of the arc, is ignored in favor of Robin. Alex Garner’s polished digital painting of Emiko for the variant doesn’t quite fit the tone or focus of the book, but the vivid reds, dynamic pose, and lovely style prove again that Garner’s one of the best cover artists in the business, up there with Artgerm and Joshua Middleton in creating a really appealing front image.

Final Thoughts: Glass and Chang turn in a polished but padded story leading to the next arc.