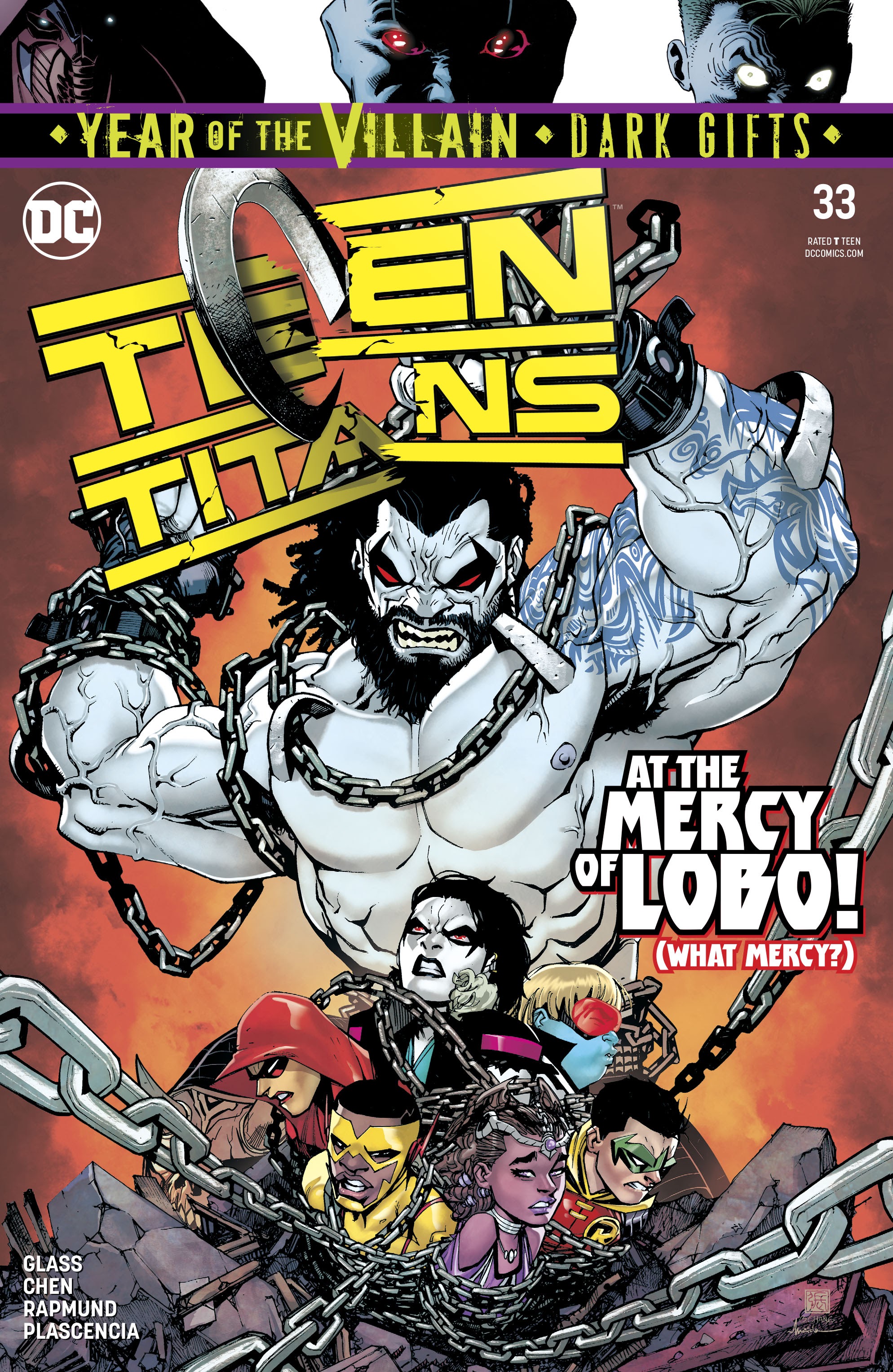 Overview: Lex Luthor’s plans for Lobo are far from over, as the Main Man soon finds out. Meanwhile, Damian and Emiko discuss the possibility of a traitor amongst the ranks, and a new dark secret is revealed!

Synopsis (spoilers ahead): Still lying defeated on the surface of the Moon, Lobo is met by the hologram of a hooded Lex Luthor, who promises him revenge against the Teen Titans and dark plans involving his daughter Crush with the promise to remove her of her will.

One month later in the Bed-Stuy gardens in Brooklyn, a yellow-skinned man in a baseball cap and dark glasses assists children tending to their garden. Not far away at the docks, the brother and sister duo from the Fearsome Five – Mammoth and Shimmer – are cornered by the Teen Titans when trying to hustle victims of human trafficking out of the city. Throughout the battle, Damian notes that the team is as efficient as ever but they all give him the silent treatment outside of battle.

Later at Central Park, he converses with Emiko on his suspicions he’s had for over a month regarding a potential traitor on the team. Implying first that she’s the traitor, the two go down the list of members and rule out Wally. Damian doubts Djinn and Roundhouse, and question the possibility that Crush might’ve betrayed them. Before Emiko leaves, Damian invites her back to Mercy Hall. Emiko insists she’s done with the Titans, but Damian promises that their methods have changed.

Deep below Mercy Hall, Robin interrogates Mammoth and Shimmer on how a couple of D-listers have gone up to human trafficking, suggesting they’re being manipulated just as their teammate Gizmo had been. Djinn interrupts, promising that she can get the truth effortlessly. Above, Robin goes to the monitors where the yellow-skinned gardener is revealed to be a mindwiped Brother Blood. Along with Gizmo, Atomic Skull, Onomatopoeia and Swerve, it’s revealed that Robin and Djinn have been mindwiping villains and giving them new public service identities in order to end crime more efficiently.

Analysis: Team books need issues to breathe now and then, and although this issue promised the third round between Lobo and the Titans, I appreciated the swerve in storytelling. The team is currently fractured, and Damian and Djinn’s actions are only going to make things worse.

Mindwiping villains has been famously taboo since the halcyon days of “Identity Crisis” back in 2004 (two years before Grant Morrison created/reintroduced Damian). It’s a practice that would make for terrific storytelling had it not taken place in the past, and although it works great for Damian’s character and matches his mindset, I’m worried that as a plot its potential would prove vaster in a Justice League title. The political and ethical implications would really get a workout with longer-running, more fan-favorite characters. With this team, you can practically see and hear Wally yelling at Robin already (similar to Wally Rudolph West yelling at Green Arrow in IC). Damian is a lot like his father in that his purpose in team books is to behave shady, work against the team for what he tells himself are their best interests, and ultimately learn the true value of friendship. It’s a shame, as the conceit of the mindwipe idea is strong, but wasted on Damian. The unpopular (among his friends) character doing things that will continue to tick his friends off only ends with him leaving or getting kicked off the team, or his friends forgiving him. It’s binary storytelling and a kind with a plot we’ve seen before.

The artwork by Sean Chen and Norm Rapmund was solid. Serviceable enough without straying too stiff or too experimental into stylized. The art speaks to the utility of the issue, which is a stop-gap from the last few arcs to the next. As I said before, issues like these are welcome. The plot is predictable, but it’s good to see quieter, calmer character interactions than nothing but fight scenes from issue to issue.

Final Thoughts: The potential does remain for this to lead to some interesting places. I’m not terribly confident, but I’m not dreading the following issues to come either.