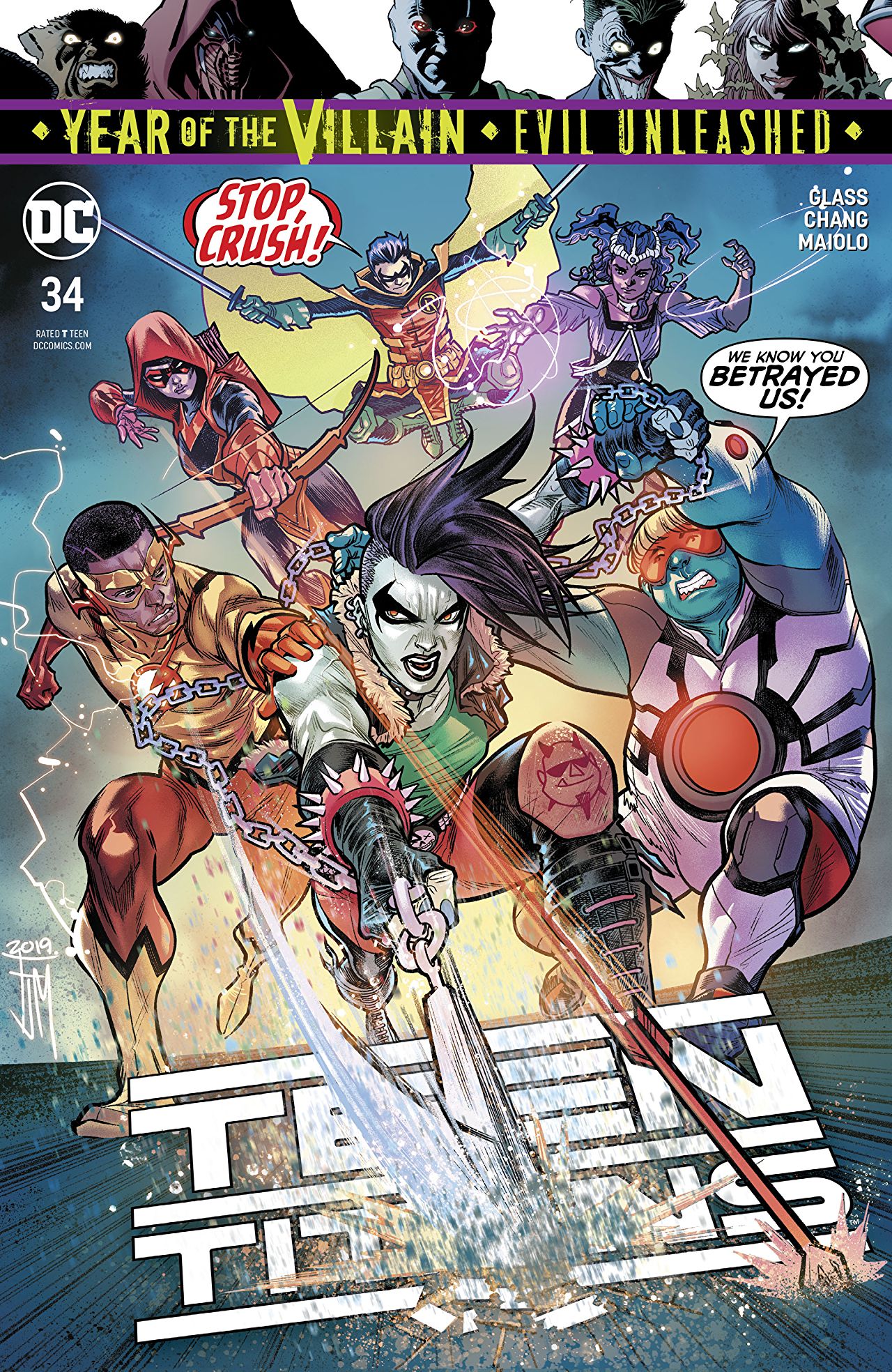 Overview: Djinn’s ring has gone missing and Damian conducts a brutal vetting process to find it. Going by each member, is there a traitor in the midst or will his suspicions drive a wedge in the team worse than ever?

Synopsis (spoilers ahead): Robin and Kid Flash are discussing the pros and cons of the new supervillain rehabilitation prison when Djinn bursts through the door claiming that her ring is missing. Crush immediately suspects Wally, prompting Damian to put the team on lockdown.

Soon after, Crush confronts Djinn about being careless and eventually about kissing her to which Djinn has since ignored. Djinn fires back, saying that she’s been around for four-thousand years and that her feelings are a new experience, and that Crush should be considerate of them but is instead being accusatory of her. Later, Damian begins his interrogations by acknowledging that he monitors the team via spy cameras and that Crush could’ve taken the ring to influence Djinn’s feelings for her. At one moment, Crush becomes so enraged that she accosts Damian with full-red eyes, akin to her father Lobo. She calms down, but denies stealing the ring.

Next, Robin interrogates Roundhouse, accusing him of stealing the ring to bring his dead sister back from the dead. Roundhouse lets Robin know he’s onto him, and that his daily struggles with his past and improving himself would not engender him to steal from Djinn.

After Djinn suggests that Damian possesses a motive for wanting the ring, he talks to Kid Flash and lays out reasons why he might’ve released the prisoners as Deathstroke suggested. Wally denies both that and stealing the ring, suggesting that the most logical suspect would be Red Arrow.

In Manhattan, Red Arrow is attacked by Djinn who hurls her out the window of a high-rise apartment building. It’s revealed that Djinn was being controlled by Roundhouse, who – with the ring in his possession – implies that the other Titans are next on his hit-list.

Analysis: I was ready to harangue this issue for its kitschy characterization and melodramatic storytelling, but Adam Glass really pulled a fast one by the end. What began as an eye-rolling sequence of full-throated finger pointing and accusations turned into pretty interesting interplay between Damian and the Titans. And it stuck the landing, as I was completely surprised at the revelation of who stole the ring.

What works about this issue is how obvious of a story it was from the on-set. Rather than continue with the plot of the supervillain reformation prison from the last issue, we have a new mystery that instantly gets everyone on edge and even violent with each other. There are some clichés that should be beneath this book (such as Robin shouting “Crush stand down! That’s an order!” as though that ever would’ve worked on anyone on this team), but for the most part Glass has fun with Damian’s childish suspicions and his attempts to root out the culprit by just behaving like a tool at everyone that isn’t Djinn. Damian’s character has proven hard to keep consistent over the years, and while usually his hard-assed approach to crime fighting and teamwork quickly becomes one-dimensional and repetitive, there is a clear misinterpretation in how he would imagine Batman going about solving such a case that works in favor of his personality. As evidence by stories such as “Tower of Babel”, Batman would’ve been far sneakier and less obvious in his investigation. You have to ask yourself what Damian thinks is going to happen after this mystery is solved, when he accused literally everyone on the team of betraying him. It’s here where I’m missing the dynamic between him and Jon Kent, where Jon’s constant light-heartedness kept Damian smart. Supported by a bunch of relatively inexperienced teens, Damian overcompensates to impress them and himself, and ends up being incredibly basic. And Roundhouse all but spells that out for him when he pegs his interrogation technique as something easily found on the internet. There isn’t any realization on Damian’s part, as this is the kind of book where characters just talk at each other and not really converse back and forth, but it was enjoyable to see as it was.

That is the sticking point of this issue though, that every scene is someone just dressing down the person they’re talking to. Whether it’s Djinn and Crush or Damian and Crush, or Damian and Roundhouse or Damian and Wally, this issue tried to give reasons for the reader to dislike the characters by stating their flaws. It’s ham-fisted and unnecessary, and also in-artful. These flaws don’t express themselves in their actions, they’re stated and labeled by the characters themselves. As a result, nothing really happens in this story aside from scenes of basic finger-pointing. However, the finger-pointing was called out as just that by the characters. So what exactly is the story we are left with?

I said that this issue surprised me in a good way and I meant it. The reveal was genuinely surprising and the individual scenes of Damian and the Titans were engaging. However, the conflict is so spelled out and forced onto the book in a “Grab the Reader” way that it’s obviousness almost repels. I’m liking this title for what it is – a team superhero book with diverse characters – but the constant teeth-gritting and calls of “BETRAYAL!” has gotten old, fast.

Art-wise, everything was solid but I have trouble with how Bernard Chang draws Kid Flash. The constant lip-pout is distracting and doesn’t map with the action in the scene. Wally is scrunching his face in nearly every scene, even when he’s getting choked out by Crush. It reminds me a bit of Babs Tarr’s Batgirl, and how she would often draw Barbara Gordon with a pout, but Chang’s mouths are less endearing in my opinion. Props to him on the final image of Roundhouse, however. The character looked downright malevolent and creepy, in an off-putting way that totally worked.

Final Thoughts: This was a good issue in a decent title with a questionable story. It might not work out well in the long run, but for a single monthly issue, I was invested.