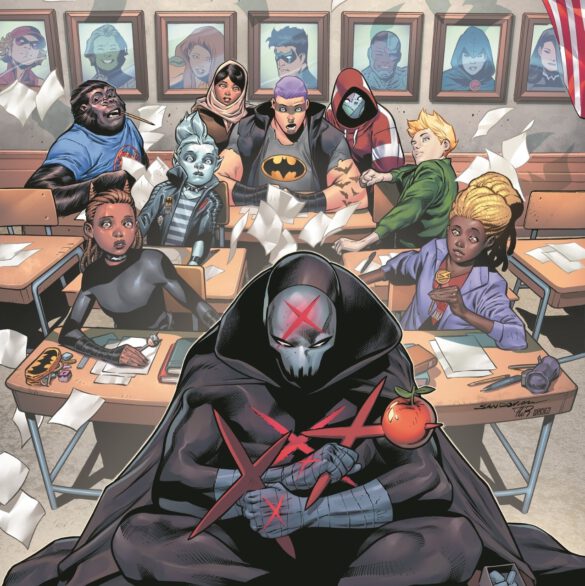 Synopsis (spoilers ahead): Standing at a podium in a room full of young heroes, Nightwing and Starfire welcome a group of new students to Roy Harper’s Titans Academy on Titan Island. Each new hero was handpicked for their gifts, work ethic, and above all, their strength of character, and now has the opportunity to earn their place on the Titans’ permanent roster.

Despite their curiosity, Nightwing uses their questions as an opportunity to demonstrate fighting techniques and explain to his students the importance of knowing who you are under the mask and of a team. “As for Red X,” the hero says as he completes his demonstration, “the best thing I can say about him is that he’s dead.”

With that, it’s back to self-defense training.

Half a kilometer above Mecca, Saudi Arabia, the Teen Titans, led by Bunker, take on Clock King, easily working together to defeat the villain and his henchmen. Instructing from Titan’s Tower, Starfire reminds Bunker to try and have his team back in time for the party, which the Titans are hosting later to celebrate Nightwing’s birthday.

Later, in the simulator room, Donna Troy compliments Brick Pettriosso on his win; his ability to unleash an organic E.M.P is impressive. As Brick’s faculty advisor, they’re scheduled to have an appointment discussing his schedule, but that’s tabled for a different time as sparring takes its place.

The evening goes on and as the last notes of ‘happy birthday, Nightwing,’ trail off at his party, the founding member shows Cyborg and Donna the anonymous gift he’s received on his special day: the original Red X mask.

None of the Titans know who might have delivered it or why. Nightwing uses the gift as an opportunity to show the mask to the new heroes and tells them that Red X is a reminder of what happens when heroes forget who they are. Red X is when people get hurt. And it’s the perfect reminder of what the Titans hope to achieve at Harper Academy.

With that, the day is concluded, and it’s time for the students to head to their dorms for the night.

As the doors to the fight simulator room slide open, Nightwing is surprised to find Brick inside and asks what he’s is still doing up. Before the older hero can finish his sentence the teen bolts out of the room and past an approaching Starfire.

The two Titans stare at his receding back in confusion. Neither hero is too concerned, however; Starfire has a gift to give Nightwing for his birthday, and she asks if he brought the mask, to which he replies that he must have set it down somewhere in the lounge.

Starfire smiles at Nightwing and says that she thinks they can do without it.

Elsewhere, a man’s fists collide with a mirror, shattering it. His reflection stares back but his face is unseeable; it’s covered by the mask of Red X.

Analysis: Class is in session as writer Tim Sheridan brings old and new heroes alike to Titans Tower in Teen Titans Academy #1. With the original Teen Titans now acting as mentors and teachers to the next generation of young superheroes, a variety of new heroes are introduced with the potential of permanently joining the founding members, resulting in interesting dynamics, double the emotional baggage, and hints at deep, dark secrets. One such secret isn’t so secret anymore, however; Red X, an ever-elusive and unknown anti-villain whose future actions bring about the apocalypse (as seen in Future State), is slowly creeping out of the shadows.

As a whole, I really enjoyed Teen Titans Academy #1; seeing the original team back together, no longer as just heroes but teachers as well, and their dynamics amongst each other and their new students was well done. I really liked the art by Rafa Sandoval, and although I did enjoy reading about all of the new characters and seeing some more familiar ones, like Billy Batson and the Teen Titans led by Bunker, it did make the overall flow of the story feel a bit awkward at times.

The teased tragedy of Future State adds a level of intrigue as references and training simulations featuring the persona of Red X are continually dropped. Despite the reminders of his uncomfortable past with Red X, Nightwing, and the other founding Teen Titan members, don’t seem too concerned with it all. Each time Red X is brought up Nightwing uses the opportunity to impart some wisdom on the new heroes and seems almost too unconcerned. In fact, the ease with which the heroes take these hints in stride makes me wonder if they’re not more suspicious than they’re letting on.

How this will all play out will definitely be interesting to read, as Nightwing and the rest of the heroes move closer and closer towards the teased tragedy of Future State.

Tim Sheridan and Rafa Sandoval open the doors to Teen Titans Academy and bring in new and old faces, most good and some bad, as the founding heroes step into new roles as teachers. The reminder of Nightwing’s dark alter ego is a pointed strike at the first Robin and hint of the potential future to come. I’m excited to read how those future events will play out!