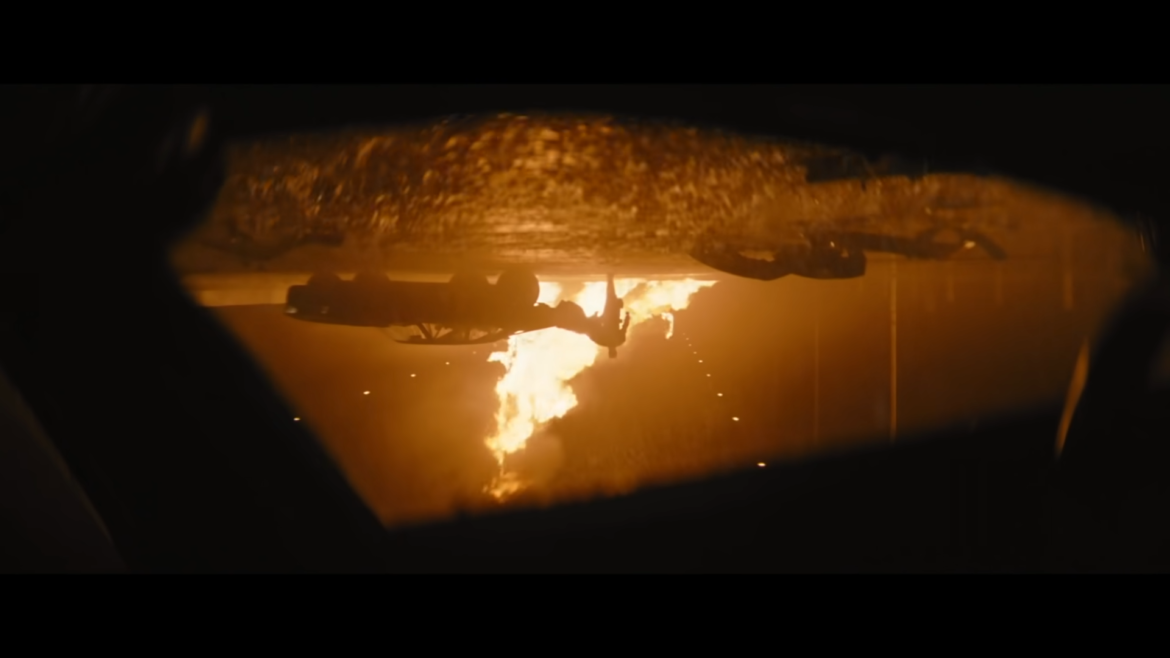 The highly anticipated second trailer for The Batman from Matt Reeves dropped at DC FanDome and not only did it meet expectations, but it also exceeded them. The trailer is only two minutes and thirty-nine seconds long and is full of amazing moments. If needed, I could have made this a top twenty list, but it’s important to stay on brand, so let’s just stick with our Top Five. 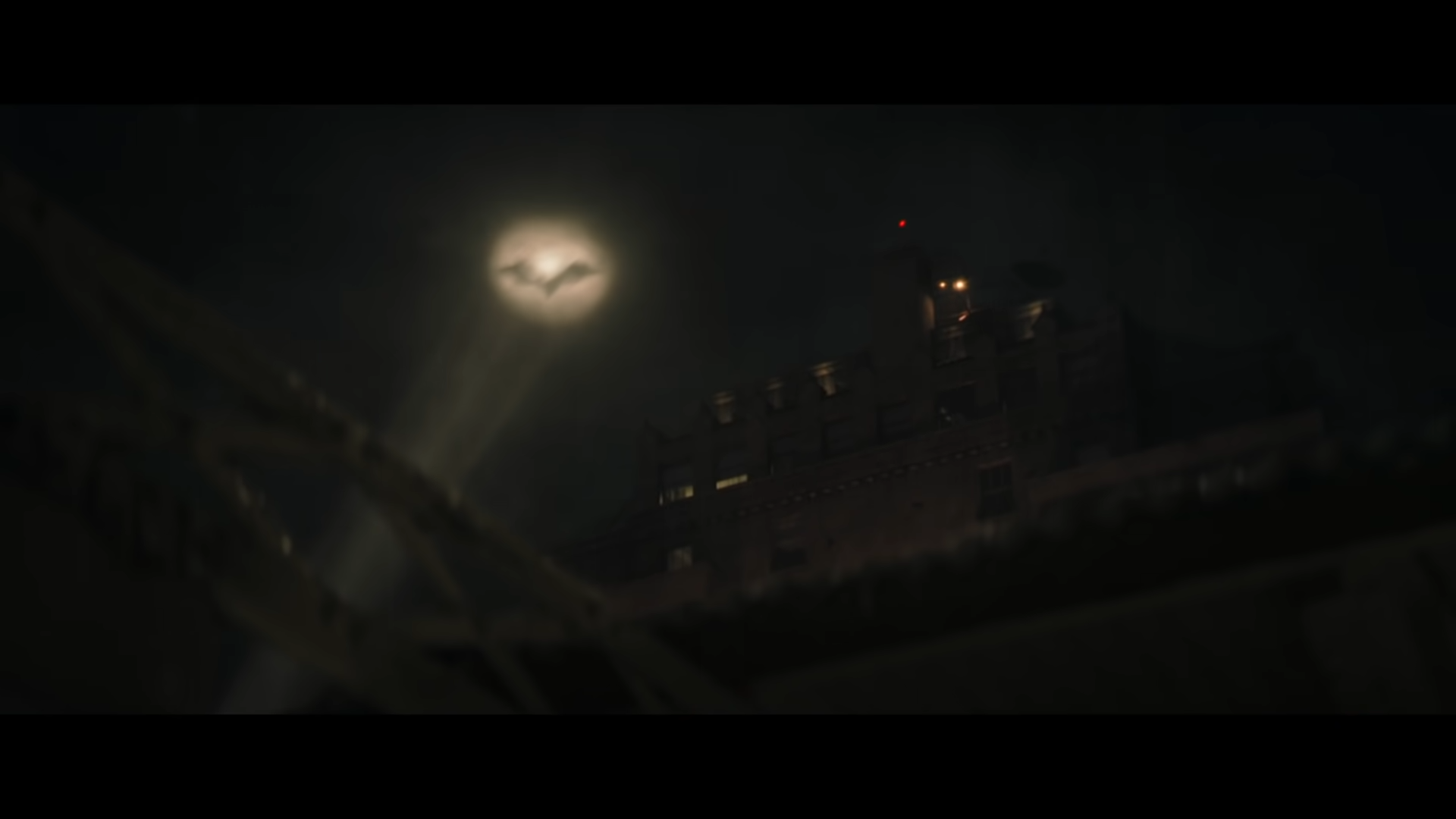 We got a little taste of this amazing quote on the day before FanDome with just a still image of the Bat-Signal. One of the early shots we see is someone, presumably Jim Gordon, lighting up that signal into the sky. There is something about seeing that shining bat up in the Gotham sky that can excite any Batman fan. The Gotham sky is lit up with that unique Bat symbol, which leads into the shot of Batman rising up to take on those clown thugs from the first trailer. (Shoutout to Jay Lycurgo from Titans on being one of those clowns).

Thanks to Batman Forever we know that the Bat-signal is not a beeper, but now we hear that it is a warning. When that Bat is shining in the sky, it’s a message to all criminals that The Batman is coming. He does not hold back his punches. From what we have seen in this trailer, Robert Pattinson’s Batman isn’t out to just scare the criminals and watch them run away. He doesn’t mind getting his hands dirty, and if he has to break a few bones to get his point across, then so be it. 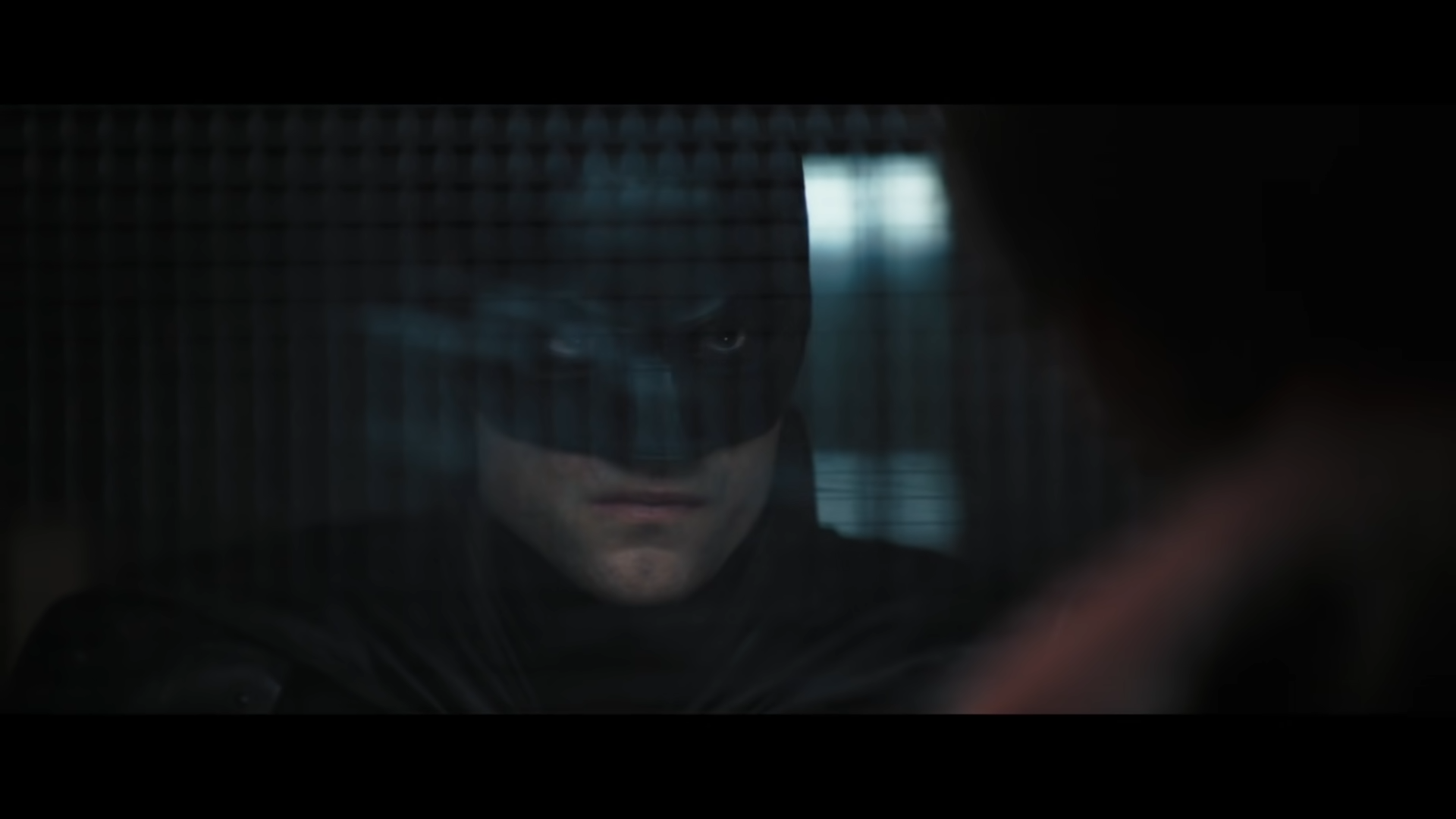 We never get a true look at Riddler’s face, and I am more than okay with that. The vibe that we are getting with Riddler is a creepy, almost Hannibal Lecter-type vibe. We see him face to face with Batman in an interrogation room as he tells Batman that he’s been trying to reach him. Riddler is definitely being presented as a threat on par with Heath Ledger’s Joker in The Dark Knight.

I love this interpretation that we are getting with Riddler. The cold and calculating villain instead of the off-the-wall, puzzles everywhere version we’ve seen in interpretations from Frank Gorshin and Jim Carrey. Don’t get me wrong; I love the Gorshin version, but in recent years Riddler has been a joke villain and looked at as Joker-light. Now is the time for Edward Nygma to stand up as a top echelon Batman villain. 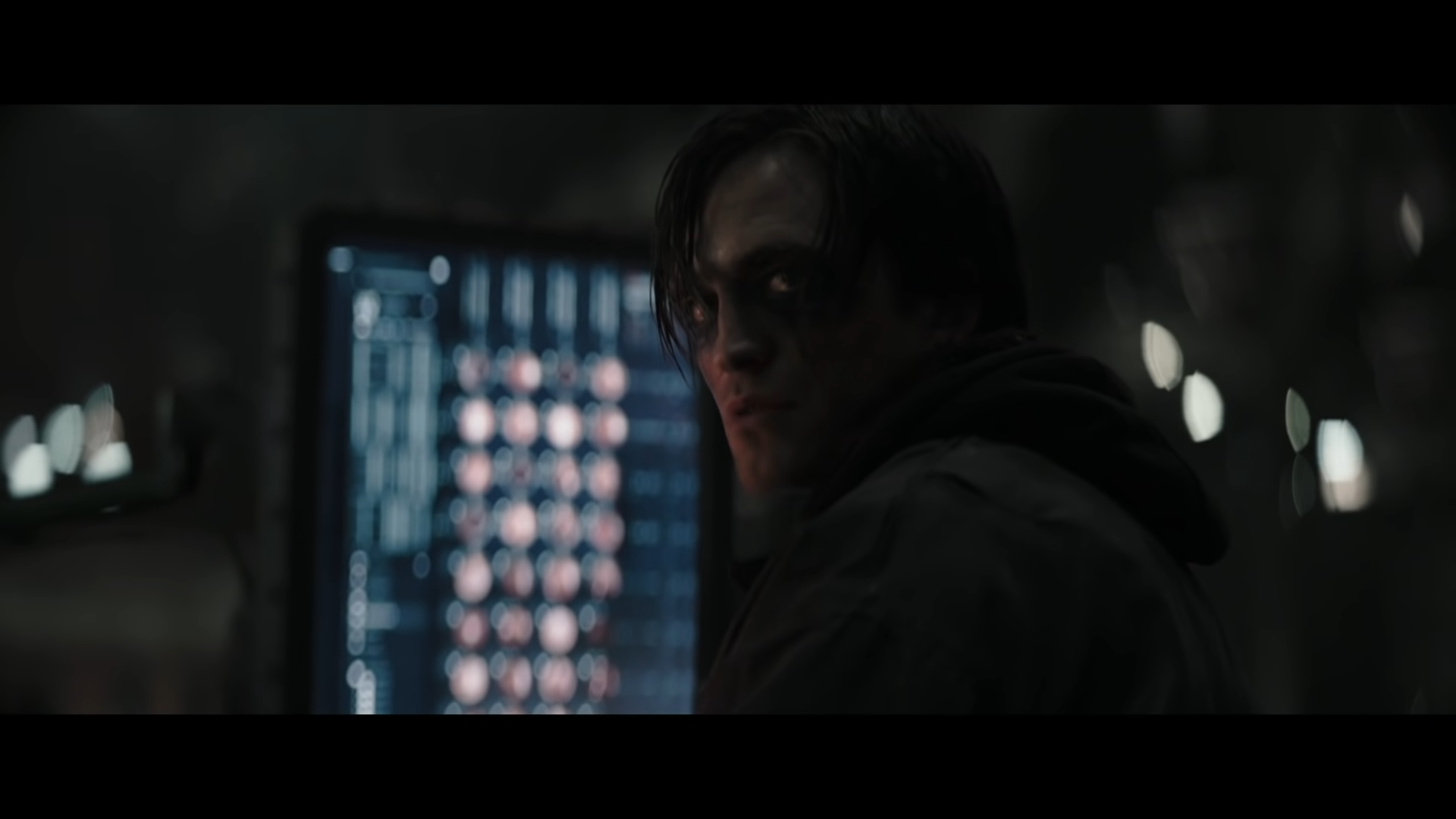 Ahhh that classic Bruce Wayne scene we have so many times in comics, movies, and television. Alfred tells Bruce that the path he is on will lead him to have nothing left, and in classic Bruce fashion, Bruce tells Alfred that he does not care.

We’ve seen this so many times. It happened a few times in The Dark Knight Trilogy and maybe every other month in the comics. It’s usually Alfred or another member of the Bat-Family telling Bruce that he doesn’t have to fight this war alone because Bruce is pushing himself to limits that are even too far for him.

Reports are that this is a Year Two Batman. Batman has been on his own and feels like he and he alone can protect Gotham. Later in the trailer, we see Batman and Catwoman talking on a rooftop. It could be towards the end of the film, and we are seeing Batman trying to convince her to join his fight. Perhaps at the end of the movie Bruce knows he can’t save Gotham alone, and we get a tease of Dick Grayson because it is usually Batman’s third year that Robin joins the crusade. Fingers crossed. 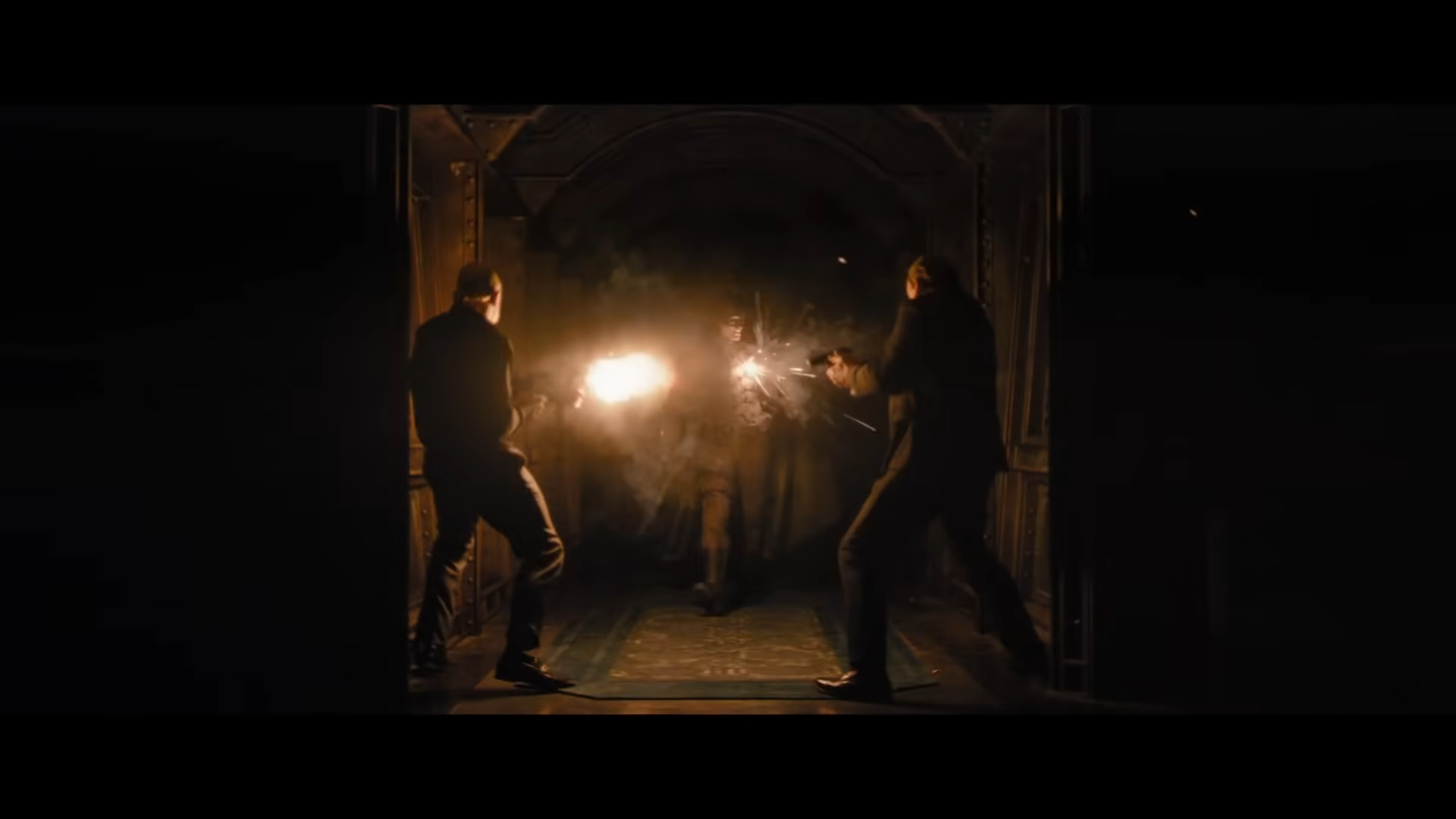 This piece of the trailer starts with Selina Kyle and Batman on top of a roof with her asking who he is under the mask. That leads to Batman crashing down from a glass ceiling (always cool) and then taking on thugs in a dark tunnel. The tunnel only lights up because of the guns that are fired, and we see Batman take down each thug. That leads into the “I’m vengeance” line, which we got from the first trailer.

The bit with Batman in the tunnel seems to be an homage from The Dark Knight Rises when Christian Bale Batman was fighting Bane’s thugs through the sewers. In that movie, he was avoiding the gunfire, but Robert Pattinson was taking those bullets and then taking down bad guys. Batman takes a lot of bullets in this trailer. We know he always has body armor, but those were some big-time bullets. 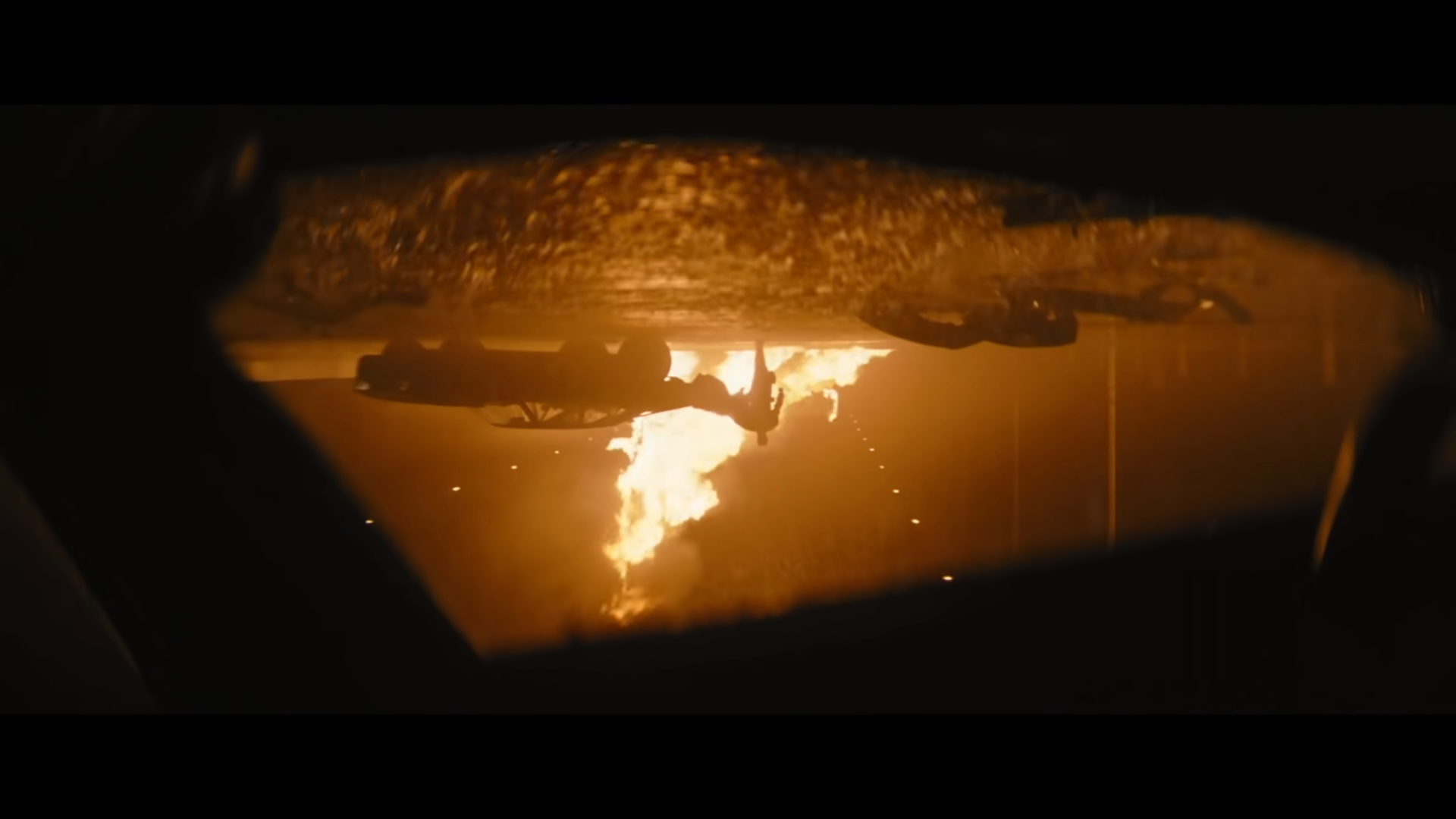 The money shot. The Batmobile is giving chase to Oswald Cobblepot as a big explosion happens. Oswald is celebrating because he thinks he took down The Batman only to be shocked as the Batmobile comes through the fire and rams into the back of his car. Batman approaches the car as the camera turns upside down and as the score swells and leads into the title logo.

It’s an awesome moment that I almost wish was saved for the film, but I am not complaining. Outside of Batman v Superman, we really haven’t seen the Batmobile give chase. We have seen it being chased plenty of times like in Batman ‘89 and Batman Begins (“He’s flying on rooftops!”). In The Batman, I am hoping for fewer machine guns on the Batmobile, which has been a movie staple for Batman and his car. That is unless they are rubber bullets because we know those are honest. Thank you, Frank Miller.

As I said, this list could have been a top twenty or top fifty. There are so many moments in this trailer that hit the sweet spot. Batman covered in mud. The Batman/Catwoman rooftop meetups. The Oswald “Hey take it easy, sweetheart!’ to Batman. Perhaps the funniest moment of the trailer.

All in all, it feels like Batmania is returning. I wasn’t around in 1989 but have read and heard about how crazy it was to know that Batmania will never reach those heights again. The Dark Knight was close with the hype around Heath Ledger and his performance. Affleck never quite got there, and it is a shame that he never got a solo film because I think it would have been great.  I feel The Batman could equal or perhaps surpass that Dark Knight hype. When it gets released, it will have been almost ten years since we had a solo Batman film. The Batman is coming. Buckle up.

Editor’s Note: “TBU Five Things” is an article series where the staff at TBU takes a look at either an upcoming or past project and gives what they are hoping to see or wish they saw. You can find all previous entries of the series here.