The Year of the Batmen

We loyal followers of the Dark Knight are in for a treat this year. No, not just a treat, a singular event. Perhaps something that many of us will only experience once in a lifetime. This year DC comics will not only follow the adventures of one Batman but as many as four, or quite possibly seven!

In 2010 in what I call “The Year of the Batmen” I will endeavor to chronicle these various manifestations of Batman and discuss the dynamic of having their respective storylines running concurrently. Even as they exist in different “universes”, alternate realities or as parallel plotlines that remain apart but eventually come together.

How will these Batmen compare? How will the media and readership accept or reject them? Whose storyline will succeed while another may fail? Will the various writers and artists vie for supremacy or just engage in a little friendly competition. Is it possible for all of these incarnations to exist at the same time and avoid saturation? Or will we embrace all of them and insist they continue for years to come? Perhaps multiple readership factions will arise and insist their Batman is the one true Caped Crusader.

As we all know Dick Grayson has picked up the mantle of the Bat in the absence of Bruce Wayne. This particular arc has been admirably filled out by the likes of Morrison, Daniel and Winick. How will the eventual return of Bruce Wayne (written by Morrison) effect Grayson? Will he give up the cape and cowl and go quietly into the night or will there be conflict? Will Bruce actually want it all back?

What of the iteration of the “First Wave” Batman? Brian Azzarello has promised a young Bruce Wayne one that is a, “millionaire playboy; brash, cocky and fully relishing life.” This Batman is inexperienced and makes mistakes that extract “the cost of fighting crime.” Stir in a healthy dose of Doc Savage and the Spirit and we have a whole new Dark Knight. 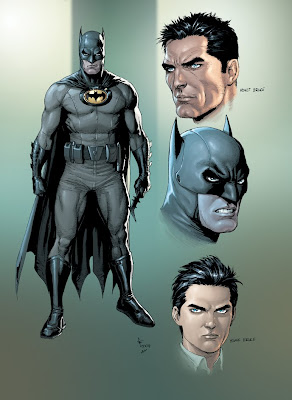 Speaking of re-imagining the tale of the Dark Knight how will Geoff Johns’ interpretation compare to Azzarello’s? Johns tells us his Earth One Batman will “break the restraints of any continuity and focus on two things: character and story.” Certainly, what we have seen of artists Gary Frank’s Earth One Batman is in sharp contrast to the First Wave Batman as penciled by Rags Morales. Frank’s take looks indomitable and steadfast while Morales looks more sinewy and athletic.

But I am getting ahead of myself. There are several other incarnations that are worthy of discussion. The ghoulish Black Lantern Batman from the Blackest Night. The “undead” Batman resurrected from a Lazarus pool by Dick Grayson. And what of the Batman that exists in “Superman/Batman” comics or in Batman Confidential? Not to mention the JLA Batman that is both teammate and leader as embodied by Dick Grayson written by James Robinson.

There will be much to discuss and I am eager to get at it. Throughout this massive effort I will seek your input. Comments are welcome. The impressions from you the reader will add fuel to the fire as we discuss and dissect one of the most iconic figures in comic book history. It all comes together in 2010, “The Year of the Batmen”.