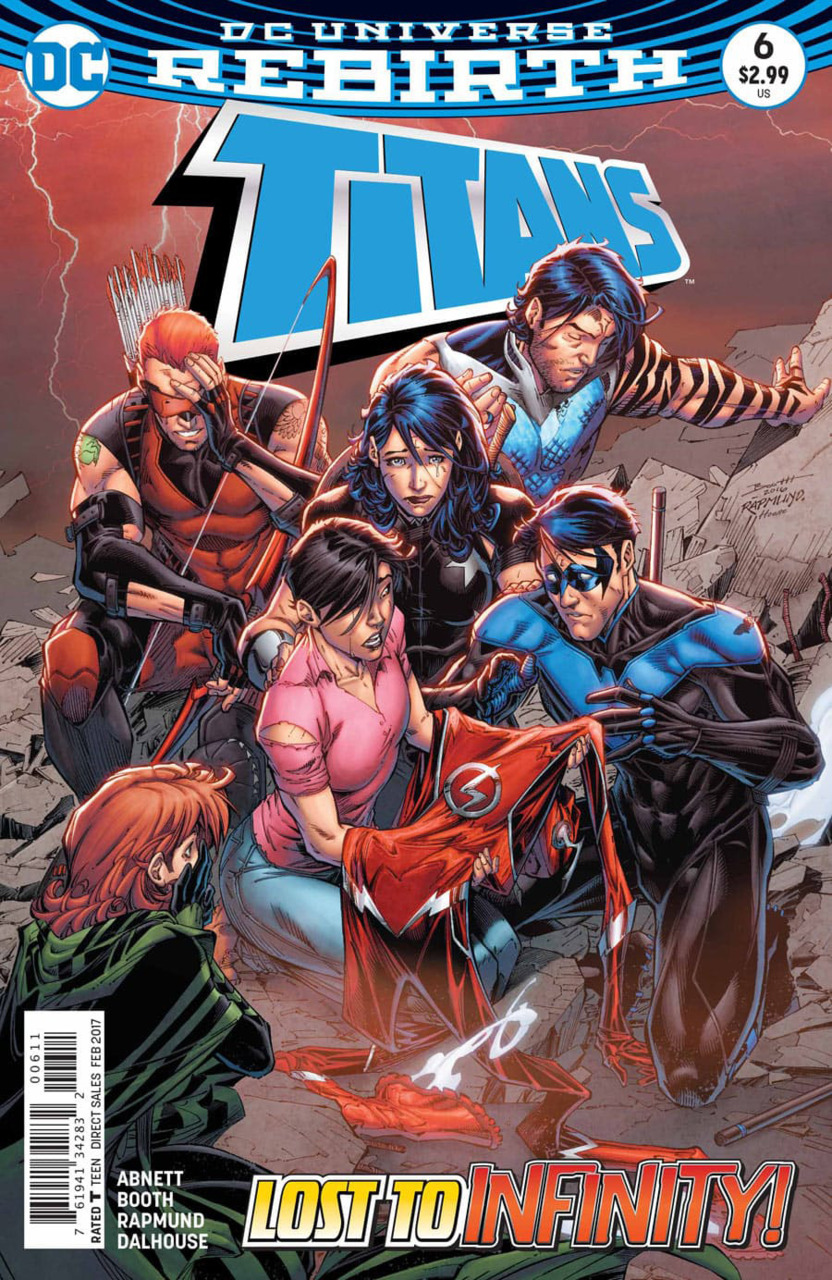 “Out of Time, Out of Mind” opens with Wally in the Speed-force and recapping the events that led him here. He however does not regret his actions.

In the real world, Linda and Abra Kadabra look over at Wally’s empty uniform. Linda demands that Kadabra bring him back but he says that nothing can bring Wally back. Kadabra mocks Linda telling her that her affection for Wally is what kept him grounded and since she does not love Wally here, even she cannot bring him back. Linda punches Kadabra and he conjures the real Titans to Gotham. Linda quickly tells them that Wally is gone and they attack.

Beyond the Speed-force we see Wally West and his wife Linda Park-West relaxing on the front porch. Wally tells Linda that he is in heaven and has no desire to leave. Linda tells him that this is not real. She tells Wally that she loves him but she is not real, instead she is just a memory of the woman Wally loves. Wally tells her that she feels real enough. Linda says that the real Linda does not love him yet. Wally repeats “yet”. She says that the real Linda may love Wally someday, after all it took her some time to fall in love with Wally West. Wally says that he cannot go back to the real world.

We see the battle of the Titans and Kadabra with the Speed-force Linda voice over. She is urging Wally to let his memories go for they are not real. Instead he has to appreciate what is real, referring to his friends the Titans.

Omen tries to rally the Titans and starts to probe Kadabra’s mind. She sees that Kadabra thinks by eliminating Wally West, he will ensure his victory. This enrages Kadabra and he attempts to blast her. Tempest gets there to draw his fire and urge Omen to continue to read Kadabra’s thoughts. She discovers that Kadabra is afraid of the Titans. His future is not as fixed as he would like the others to believe.

Back beyond the Speed-force, Linda tries to make Wally realize that there is one love and bond that is real and unbreakable, like a lightning rod. She urges him to realize that the lightning rod may not be Linda but is in reality his best friends the Titans. Linda urges Wally to say goodbye and he has to focus on the things that are real. We see flashbacks of Wally with each of the other Titans. Flash embraces Linda and runs back to the real world to punch Kadabra. Flash quickly dispatches Kadabra and the other Titans surround Wally with a group hug.

Abra Kadabra was forced back into the time stream and Flash checks on Linda’s condition. Linda does say that it will be great to get to know him better but now she is screaming at him saying that she will not be a part of this craziness again and she still wants an exclusive interview. She storms off leaving the confused Titans and all Wally says is that it will be a bumpy ride. The Titans muse over Kadabra and we move to a monitor room where Deathstroke focuses in on Flash and wonders who in the hell is he. Next issue Titans Tower.

This was a satisfactory ending to this first story arc of Titans. We get the action of the Titans fight with Kadabra as well as character development of Wally. It is interesting that the next threat to face the Titans may be the most memorable villain ever to be seen in Teen Titans comics, that being Deathstroke, the Terminator. I am looking forward to this next arc and I would like to see more character development of the other Titans as well in addition to seeing the budding romance of Wally and Linda.