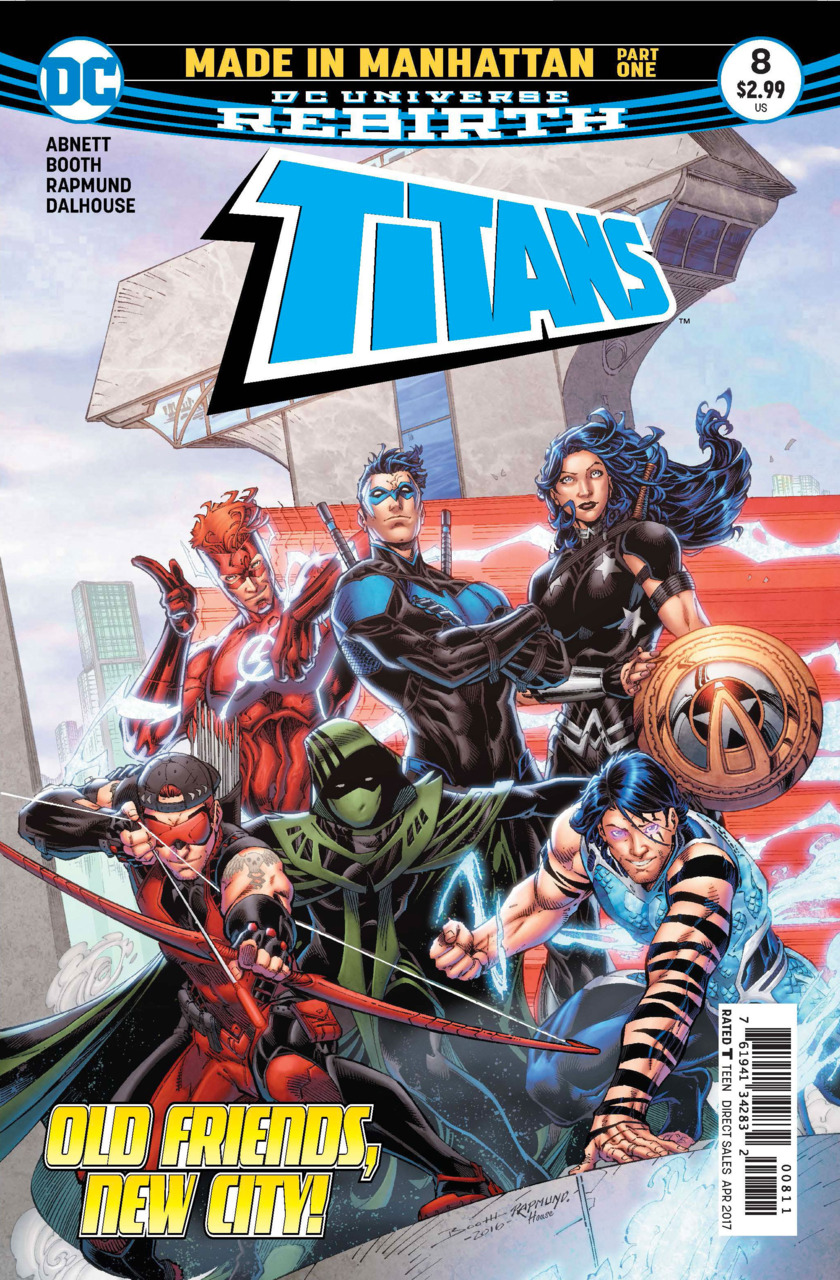 “Made in Manhattan Part One: To Bee Or Not To Bee” opens with a scene flashback of the original Teen Titans consisting of Kid Flash, Speedy, Wonder Girl, Aqualad and Robin in action. We have a voiceover of Karen Duncan mentioning that when she married her husband, she did not know that he was a superhero and a member of the Teen Titans. The last panel of the flashback is a shot of Herald (Mal Duncan) using his vocal power on an enemy. The voice over says that they have a better life now.

They are now in New York City to make sure that there lives stay better. In the present Mal and Karen are in the waiting room of Meta Solutions. The company specializes in evaluating Meta human powers, they teach how to use them and even have a “cure” for when the powers get too much for the subject. Karen is a little frightened and Mal tries to comfort her. She has recently discovered that she has powers and she is a little excited about them, but she does not want them to ruin their lives now. Mal has a flashback of a rampaging Mammoth attacking and says that he does not remember much about being a superhero but he does remember that is was scary and dangerous. He does not want that ugliness again and he has faith that Meta Solutions can help. Now Mal confesses that he checked the company out a month ago and agreed to have them “cure” him. He tells Karen that his powers are gone. This surprises Karen but Mal says that if she wants to, she can keep her powers. Peter Simon, the head of evaluation enters the waiting room and takes Karen to show her the facility.

The scene shifts to Titans Tower, also in New York City. Roy and Donna are going through Donna’s photo collection. She use to be a photographer but now she does not know why she stopped. Donna used to shoot film versus using digital and Roy is impressed with their quality. He asks her if she has any pictures of her “folks” to which Donna responds by saying no. Roy presses her to explore her past which Donna responds by telling him not to push her right now, she will get her answers on her own terms.

In Wally’s quarters, Dick Grayson walks in as Wally disconnects a face time chat with Linda. Wally was hoping to go to Keystone City to catch up with Linda. Linda says she has a lot of work to do but she may be able to see if she is free when he is in town. Dick asks if Wally has asked Linda out. Wally says that they are a long way from that. He sees her when he can and they hang out. Dick asks him if he is okay. Wally says that Superman gave him some advice saying that he should put the hours in to building a new life. Dick says that Batman would have told him to block all romantic distractions and focus on his chi. Wally does admit that he is not patient and this is going so slow for him. He has no life outside the tower unlike his teammates. He is also worried that Linda may not be interested in him.

In the training suite Lilith and Garth are training. Garth tells Lilith to punch him in the face, Lilith protests. Garth reminds her that she was concerned with her close combat skills and that he was trained in the martial craft of the Atlantean Royal Guard and Lilith punches him squarely in the nose before he was ready giving the reader a small comic moment after the heavy topics concerning Donna and Wally.

Back at Meta Solutions, Simon continues to give Karen the tour. Karen talks about Mal and having his gifts removed. Simon says that Mal was suffering to which Karen agrees. Simon also mentions the couples six month old baby.

In Simon’s office he asks Karen about her gifts. She says that they came out of nowhere. She has an energy buzzing inside of her. She can move very fast and she can focus the power and blast them out of her hands. She is exhilarated, but it scares her. She loves her abilities, but it is a real struggle to control. Simon tells her that they can teach her to control her power and if she wants them, there is not reason to have them removed. Karen says that she is not about to suit up and save the world, she has a life and a career as an air-accident investigator. Simon tells Karen that they will start with an evaluation of her powers and shows her some biometric exo-suits that will aid them in measuring and calibrating her meta range. The suit will also help her control her powers. Karen asks about Mal to which Simon says that he will be fine.

The receptionist gives Mal a cup of coffee in the waiting room. He sees a large read haired man and has a flashback of a battle with the same man who is Mammoth. Mal runs out of the building screaming.

In the training suite, Garth and Lilith continue their training until Lilith gets a psionic flash of panic and terror. She identifies that it came from Mal Duncan. He is also in New York and is in trouble.

Outside Meta Solutions, the Titans in full gear arrive to Mal’s location. Mal stammers that he left Karen inside and he does not have the nerve to go back. Omen identifies that Mal is traumatized by PTSD. Mal further says that Mammoth is in there to which Arsenal refers to the Titans Hunt story. Flash asks the team if they had a lead on him to which Donna responds by saying that Mammoth was taken down by the Justice League a few weeks back along with the Fearsome Five. Nightwing rallies the team and tells Mal to stay put as the Titans have this.

The Titans rush in and come face to face with with an excited Bumblebee (Karen Duncan). In the background we see five characters including Psimon and the next issue teaser says The Fearsome Six? Next issue.

Not much happens in this issue. We get some character beats of various members of the team with the real exception of Roy Harper and Dick Grayson who are there as foils for the other characters. We don’t learn much about the team except that Donna wants to take her search for her past much slower than Roy. Wally laments that his relationship or proposed relationship is going very slowly. We also learn that Lilith has some concern about her hand to hand skills.

This is basically a set up issue and I am interested in learning if there really is a cure to Meta powers.

The most striking thing in this issue for me is the art. I am not sure if Karen in particular is drawn appropriately. What I mean is that she is drawn as over excited in several panels. One example is the panels where Mal tells her that he gave up his powers. She is drawn as being horrified when the dialog does not give me that impression at all. The most is she is surprised that Mal did not tell her.

Even though the slow nature of this issue and the slight artist miscues, the story still have my attention.