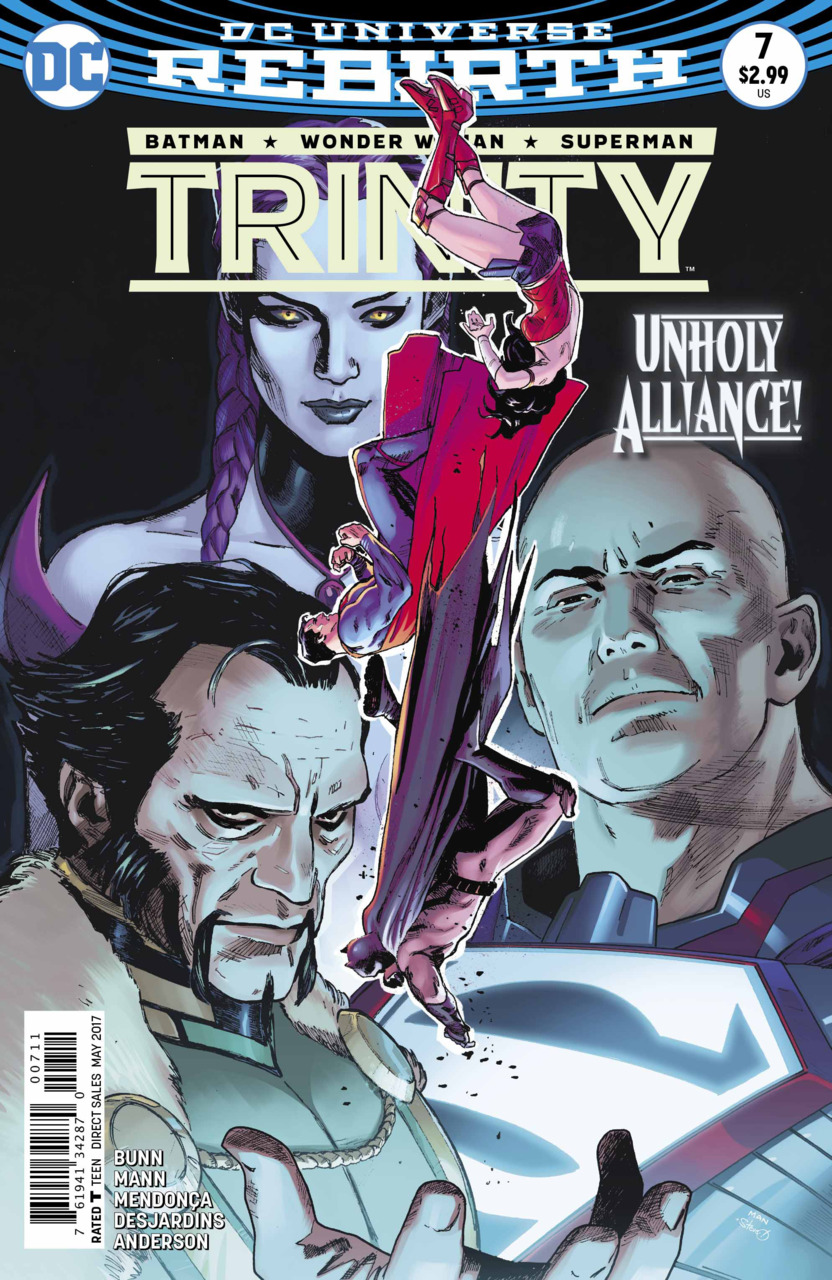 Synopsis: Somewhere off of the Kahndaqi border, Ra’s Al Ghul enters (violently) into the Great Ruins. His soldiers dispatch the few guards that are protecting what the ruins hold. Ra’s monologues about his dreams that contained this tomb and motivated to come here and find out what is here to call to him. Despite the guards being dead, the tomb’s more magical defenses spring into action with a giant statue crushing one of Ra’s men.

Just as the statue is about to attack Ra’s, Lex Luthor comes crashing through and destroys it. Lex now dons armor that displays the Superman symbol. As he takes stock of his damage, he remarks how he does not care for the “relics” of Earth and is more invested in exploring technology from other worlds. Lex then turns his attention to Ra’s. They both throw out some insults at each other, but agree that they should figure out why they were both drawn to this tomb before killing one another.

The pair turn a corner in the catacombs and come face to face with the goddess, Circe. The two seem more shocked at the pits surrounding her. They both think these are Lazarus pits but Circe corrects them by stating that they are Pandora Pits. She reveals that she was also pulled her by some unknown force and also summoned both Luthor and Ra’s. When asked by Ra’s, Circe plunges into the backstory of Pandora and her release of Evil onto the world when she opens the infamous Pandora’s Box. She explains that those evils released at that time have taken on new forms and it could be argued that the three of them are also byproducts of this evil.

As Lex rejects this notion, the pits begin to bubble and birth a creature that is a melding of the Trinity. Circe explains that this creature is a manifestation of their past and must be destroyed. The three learn that they need to work together to harness the power and drive the beast back into the pit. Once it is in the pit again and Circe states that this power is theirs, she takes them into another tomb where an ancient drawing on the wall depicts the three of them ruling over the world.

Thoughts: This first issue of this arc starts off on an interesting note with the focus on three super villains. Although they mirror their superhero rivals, it felt odd to be spending an entire issue with anyone other than the Trinity, especially after we just had such a character driven arc with our heroes.

The artwork by Clay Mann and Miguel Mendonca was a big departure from the previous arc by Manapul. It had interesting features but the big credit goes to colors by Brad Anderson and inks by Johnny Desjardins. The dark color pallet and shadowing helped to make this issue more of a villainous one.

The story and script by Cullen Bunn was a low point in comparison to the last issues. Seeing the villains come together had a few memorable moments like Lex and Ra’s meeting and trading insults. However, the introduction of the exposition-spouting Circe kept me wondering why they were all drawn to this place. Without a clear explanation, these Pandora pits are not as suspenseful as they were meant to be.

Hopefully, the inclusion of the Trinity will help to piece this together and this issue will be much more integral to the story looking back at the end of the arc. The creative team does deserve credit for the very fact they had a first issue not even really have the Trinity in it (unless you count the “amalgamation” monster). They also picked three villains that do seem to fit the Trinity and help to elevate any tension in future interactions with the Trinity.