“Some private joke…was it me?”: A Look at the Relationship of Batman and Barbara Gordon after The Killing Joke 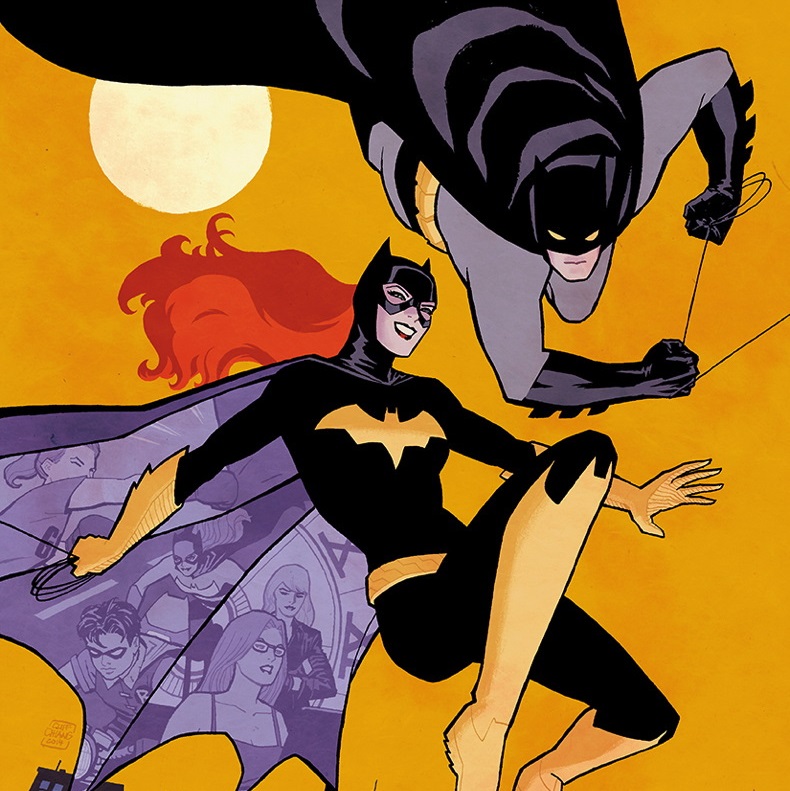 Any comic book fan will recognize the image: a ghastly white smile in the dark, a flash from a huge revolver, and Barbara Gordon’s life shattered. Through the efforts of thoughtful writers like John Ostrander, Kim Yale, Chuck Dixon, Kelley Puckett, Gail Simone, and Bryan Q. Miller, Babs re-forged her life into another shape as the equally heroic (and arguably more influential) computer expert, tactician, and team leader Oracle.

However, because of the prominence of the creators who worked on The Killing Joke, both DC Comics and a select fandom place that work on a pedestal which frustrates fans of Barbara’s character, since the greatness of Oracle was never intended by the creators of that story, and both the book and its version of Batman seem to treat Barbara as a pathetic pawn, crushed and irrelevant. The New 52 pushed Barbara’s time as Oracle into the past, restoring her ability to walk, but because of the popularity of The Killing Joke, they kept the story as part of her backstory, a tragedy which is used over and over again without providing any serious consequences.

Recently, DC’s main Batman writer, Tom King, featured Barbara as a major character in his limited series event Heroes in Crisis, and in an emotional confrontation with Harley Quinn, Babs reveals her feelings about her relationship between herself and Batman in the aftermath of The Killing Joke. The scene contrasts with another scene from over two decades earlier, the short story “Oracle: Year One” from The Batman Chronicles, in which Oracle co-creators John Ostrander and Kim Yale explore the year following The Killing Joke from Barbara’s perspective, starting with an emotionally brutal conversation between Babs and Batman in the hospital. This contrast prompted the following analysis and meditation on the two approaches to the relationship between these two characters.

The Batman Chronicles #5 – “Oracle: Year One – Born of Hope” – written by John Ostrander and Kim Yale, illustrated by Brian Stelfreeze “Yes, the doctors tell me I was “lucky” the Joker was using a doctored bullet. Half the grains of a normal .45. Had he been using a regular bullet, I would’ve been dead before I hit the floor. And he didn’t want that. No, he wanted me alive. Not because I have any intrinsic worth or meaning to him, of course. No. Shooting me…kidnapping my dad…it was all just a way to get at you. Do you understand how humiliating, how demeaning that is?! My life has no importance save in relation to you! Even as Batgirl, I was perceived just as some weaker version of you!”

“I caught him, Barbara.”

“Oh, yes. I heard about that. I heard how you two stood there, laughing over some private joke. Tell me–was it me?”

Ostrander and Yale highlight Batman’s guilt by showing that he hasn’t visited Barbara in the hospital until just before she leaves, months after the events of The Killing Joke. Barbara voices the intense bitterness and frustration that her writers and fans felt towards Batman and the creative team behind that story. She rails against her treatment as if she were Rosencrantz and Guildenstern in Hamlet, crushed offstage by the plots of two “more important” characters. Her final line to Batman, “I heard how you two stood there, laughing over some private joke. Tell me–was it me?” takes the artistic brutality of the final scene of The Killing Joke and demands an answer from Batman – and from the readers who hold that scene up as their ideal of a cold, heartless hero who has more in common with a sadistic butcher than his closest friends. Tellingly, Batman has no answer and leaves without a word.

However, Ostrander and Yale don’t leave Batman and Barbara in the dark slough of despond. Over the course of the next year, Barbara faces a supervillain and discovers the strength not only of her mind through her use of the internet and strategy, but also of her body through training with legendary martial artist Richard Dragon. A thoughtful, touching image appears as Batman, using his false identity of Matches Malone, arranges the meeting between Babs and Dragon without claiming credit or forcing Barbara to accept help from the man she partly blames for her injury. The silent, selfless support shows Batman working to heal both Barbara and their relationship, without demanding things from her he has forfeited the right to ask.

(TBU’s amazing podcast host Stella and excellent contributor Donovan were able to secure an incredibly insightful pair of interviews with John Ostrander which shed a lot of light onto the creation of Oracle. Take a listen in Episode 83 focusing on The Killing Joker as well as the interview with Ostrander featured in Episode 104.)

Between “Oracle: Year One” and Heroes in Crisis, very few writers touched directly on this facet of the relationship between Babs and Batman. Marc Andreyko’s Bruce Wayne: The Road Home: Oracle story did highlight the same time period after The Killing Joke that Ostrander and Yale powerfully portrayed, but sadly, much less carefully. The one-shot fell flat compared to the complexity of both Ostrander/Yale and King’s examination, presenting a whiny Barbara challenged by a stern and noble Bruce, crediting a large share of Barbara’s achievements to Bruce’s motivational speaking, and leaving no sense of interrogation of the fundamental unfairness and moral murkiness that Ostrander and Yale leave intact. Gail Simone’s New 52 Batgirl run touched on Batman affirming Barbara as Batgirl after she returned to the cowl, and James Tynion played with Barbara’s keen analytical mind and ability to evaluate Bruce’s motivations both in Batman Eternal and Detective Comics #975, but none of them directly examined the crucial element of how Bruce and Barbara perceive each other in light of Joker’s actions. “How long is it going to be before Batman does what I did? Goes through the Joker’s old haunts? And finds you just where I found you? And he’ll take you and he’ll judge you. He’ll see you. The same way he sees me. As pitiful. Broken. Just another product of his failure to capture this stupid Joker. Another scared, scarred girl on his conscience. And he’ll make assumptions about you. What you can and can’t do. Who you are. What you did. I found you first so I could help you first. We can…we can figure it out together. Without…people who think they know us not knowing us.”

In Heroes in Crisis, after a horrific slaughter of costumed heroes at the secret mental health facility “Sanctuary”, Batman, Superman, and Wonder Woman seek Harley Quinn as one of their main suspects. Barbara, however, after a nearly wordless interview as part of her treatment at Sanctuary where she shows the scars of Joker’s bullet, finds Harley first, and instead of beating her, she gives an impassioned speech which forms a bond between two victims of the Joker – and Batman.

One of Tom King’s strengths is his poetic dialogue. Little word choices, like “scared, scarred” highlight the attention to parallels, sounds, and rhythm which elevate normal prose to the music of poetry. The emotion Batgirl evokes – her anger at Batman’s pity and judgement, her empathy for Harley’s pain, and her hope for Harley’s future – work powerfully, as artist Clay Mann provides a kaleidoscopic series of panels in a house of mirrors, highlighting the parallels between two women traumatized by the actions of two men.

However, for all its linguistic skill and emotional effectiveness, King’s scene rings false to many longtime Barbara Gordon fans. Since Batman tends to maintain his legendary taciturnity, especially about intensely emotional relationships, very few scenes ever show Batman talking about how he feels concerning Barbara, particularly connected to the events of The Killing Joke. However, even in the least skilled and complex portrayal of that relationship, Batman does not act in pity, but in sorrow and hope for the future. He acts to empower her, rather than seclude and protect her. King has recently begun a thematic exploration of Batman’s feelings towards his family, particularly in regards to trauma, in both Heroes in Crisis and the main Batman title. In Heroes in Crisis #2, Bruce has his own interview, saying, “I train…partners to work with me. They become…my family. I’ve watched…so many of them…die.” Struggling to control his emotion, he concludes the interview, simply saying, “I’m sorry.” In Batman #62, Batman finds himself trapped in a “Knightmare” after a confrontation with a dark version of his father, and reflects on the Greek myth of Pygmalion, who created a statue of a beautiful woman and fell in love with her. “You love them, you created them, created their love, and they’re not safe,” he thinks about his family. King seems to imply an unhealthy conception of the people in Batman’s life – that he bears all responsibility for them. While the intensity of Batman’s love for his family draws us in, he also refuses to accept their own choices and responsibility for their injuries and even deaths. Such a relationship does connect to the kind of relationship Barbara describes to Harley in Heroes in Crisis.

Although this conception of Batman as regarding his family in an overly possessive manner seems to be a consistent theme in Tom King’s portrayal, another option does present a perhaps more positive light. Barbara, a brilliant mind in her own right, could be channeling real feelings into a connection between herself and the also brilliant but much more traumatized mind of Harley, using that connection to prevent any further destructive confrontations between the heroes and Harley. An element of conscious control over the narrative she presents to Harley – not perhaps fully manipulative, but carefully crafted to evoke the strongest response from someone of Harley’s experience and relationship with both Joker and Batman – perhaps explains the sheer darkness of the emotions Barbara expresses.

Perhaps analyzing “Oracle: Year One” and Heroes in Crisis doesn’t do the latter full justice, as the former tells a complete story, while the latter still has five issues yet to complete its story, not to mention the forty-odd issues of Batman left in Tom King’s epic. However, the two scenes examined here provide very different but equally intriguing consequences of the events of The Killing Joke, and give much food for thought for fans of Barbara Gordon and her heroic history. While Heroes in Crisis shows a relationship frozen in time with guilt and resentment, angrily declaring “$%@# This”, “Oracle: Year One” starts with the same guilt and resentment and builds forward into the hints of a healing relationship and a new purpose for Barbara’s life, one that is “Born of Hope.”