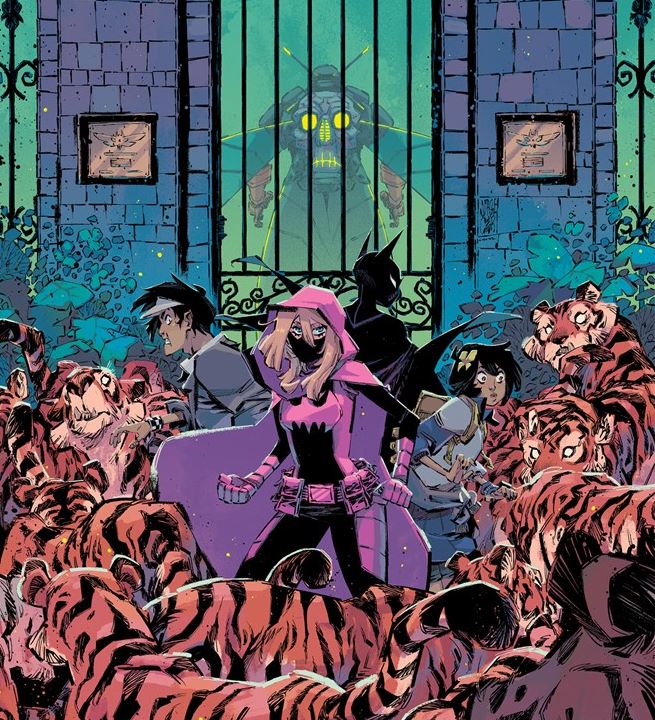 Overview: Many twists and turns await the Batgirls as they enter the Gotham Zoo in their pursuit of the Hill Ripper in Batgirls #11 – but Steph also faces twists and turns of the heart as she grows closer to Gotham Academy’s Kyle Mizoguchi!

Synopsis (spoilers ahead): Batgirls #11 opens with Grace O’Halloran’s podcast narrating the memorial service for the victims of the Hill Ripper as Steph and Cass stake out the rooftops above as Batgirls. Cass encourages Steph to text her new crush Kyle Mizoguchi, and Steph invites him to their clue-finding expedition to the Gotham Zoo (following the clue found in their murdered neighbor’s false eye in the last issue).

Commissioner Montoya fights with the mayor about the Hill Ripper case, and Officer Brooks suggests asking for help. Brooks builds his own Bat-Signal to contact Babs, who meets him in the shadows as Batgirl, gaining a thumb drive full of police evidence. Babs drops the drive off with Grace mysteriously, and the podcaster reveals she will share all of the evidence, enraging Mr. Fun, listening as he showers.

Steph and Cass meet Kyle at the zoo, along with his younger sister Maps, who has their whole day “mapped” out, dragging Cass along as Steph and Kyle walk more slowly. They get to know each other as Maps and Cass take a shortcut to the Bat Cave (Cass’s real target), where they see Killer Moth tied to the ceiling with the bats. Cass climbs up, releases Moth, who gives her a message from his boss, and plants F1D0, the robot dog, on him to lead the Batgirls to that boss. After swearing Maps to secrecy and friendship, Cass and Steph meet back at the loft, grab a quick bite of cuppa noods, then race to F1D0’s GPS signal. On the way, they debrief on Steph’s date and Cass’s bonding with Maps.

Mr. Fun, still full of rage, creeps through the streets of Gotham.

Meanwhile, the Batgirls enter the house at F1D0’s location, finding the owner dead in the attic, and learn that Grace is the next target – but are confronted by the Riddler over Killer Moth’s body (possibly dead). Resolving to stop Riddler and save Grace, the Batgirls prepare for battle!

Analysis: Welcome, friendly Batgirls fans! After ten stellar months of reviews from Hannan, I’ve been offered the opportunity to be your reviewer for this fun series starring the world’s best Batgirls – Steph, Cass, and Babs! Way back in 2016, at the beginning of Rebirth, I was the reviewer for Hope Larson’s run on Batgirl and kicked things off with a retrospective look at the history of Batgirl titles that I still remain quite proud of. I won’t go into quite as much detail or history here, but I hope to bring my passion for the history of all three Batgirls to my reviews for this series!

In Batgirls #11, writers Becky Cloonan and Michael Conrad have scaled their text box narration way back, a welcome change. Though it is often quite fun to read the casual, breezy asides, they often distract from the action or lead to a sense of lesser stakes – since the narrator doesn’t seem concerned – why should the reader be? However, without that tonal clash, the danger of the Bat Cave at the zoo, the creepy house of murder, and the Riddler’s surprise appearance have a lot more weight than previously.

Hopefully, the challenge of the Riddler and his henchman Mr. Fun (who previously provided a serious threat to Cass way back in 2002’s miniseries Batman Family), will provide a satisfying conclusion to the arc in the next issue. The final issue of Batman Family promised, “Keep your eyes peeled, ‘cause the Network may be down, but they’re not out. You never know when any of our newest villains like Freeway, Suicide King, or Mr. Fun might resurface, and rest assured, Athena will be back – in force!” Well, Athena (the main villain of that story) never came back either in force or by herself, but Mr. Fun is, indeed, back! And lucky for you, this reviewer has finally read the forgotten eight-issue miniseries to find out more about our mysterious villain! We don’t see much of the psychotic killer of few words in this issue, but in the few panels we do see of him, he’s not doing well – and that doesn’t bode well for our heroes or those they want to protect! Mr. Fun’s MO tends to be extremely violent killings, often with his bare hands, so Grace is indeed in grave danger next month!

A few writing flaws mar the story in Batgirls #11 – why does Babs give Grace the drive instead of using it to track down the villains? And the issue seems to confuse podcasting with live radio (or maybe live streaming) – a simple switch from “podcast” to “live stream” would have removed such confusion.

These flaws are greatly outweighed by the solid character work, including a lot of historical references! Cass’s enthusiasm for getting boba with Maps may be a nod to Mariko Tamaki’s Batgirl story in Festival of Heros last year, while Steph’s reference to her skill at the piano is a clear tip of the hat to Jon Lewis’s odd, offbeat run on Robin from 2002-2004. In fact, the whole issue has a bit of a Jon Lewis flavor, with a lot of quiet, quirky scenes of character development – though with more of Cloonan and Conrad’s signature energy than Lewis was wont to put in. The shipping between Kyle and Steph is muted, with Steph seeming to feel she doesn’t have time or space in her life right now for a new romance – but this reviewer, at least, hopes that someday Steph and Kyle can give it a real go, as they are both great heroic characters who deserve to find love.

Neil Googe provides full art for the first five pages of Batgirls #11, with Scott Godlewski (the sometimes backup artist for John Timms on the Bendis run of Young Justice, including the excellent issue starring Spoiler vs. her father) providing inks and finishes (a more involved process than inking taking a much rougher sketch to completed comic art) for about half of the book, with veteran inker Wayne Faucher inking the rest of the book. Unfortunately, the difference in styles between Googe, Faucher, and Godlewski are really obvious, leading to characters changing in appearance from page to page, particularly the memorable half-profile Steph with one huge eye, giving her a cyclopean look – perhaps appropriate for an October comic, but probably not intentional, and thus distracting. None of the art is at all BAD; it’s just inconsistent, which is a bummer, as Googe’s first two issues were really, really solid. Hopefully, scheduling will allow him enough time to put together the final issue of this arc solo, or at least with one consistent inker.

Original series artist Jorge Corona continues to provide the main cover, this time showing an impressionistic scene of Steph, Cass, and the Mizoguchi siblings surrounded by tigers as Killer Moth lurks behind a gate. Striking and gloomy, it’s a fun image to sell the comic on, though doesn’t quite match the sunny tone of the actual zoo visit – though Corona does capture Maps’s signature yellow butterfly hair ornament (and secretly one of her friends, Katherine Karlo). Audrey Mok provides a cheery cardstock variant of Cass and Steph, brandishing their fists in a playful manner at the viewer, surrounded by a clever and appealing turquoise bat symbol. Rian Gonzales paints the (as expected) lovely incentive variant in soft pastels, previewing next month’s Mad Hatter appearance with a giant Steph, regular size Cass, and chibi Babs, Bruce, Dick, Tim, and Hatter, with Gonzales’s trademark rainbow, sparkle, and cute animal embellishments.

Though inconsistent art mars this issue a little, it still provides many great character moments, a great pair of guest stars from Gotham Academy, and a surprise appearance by a name-brand villain for an enjoyable chapter!