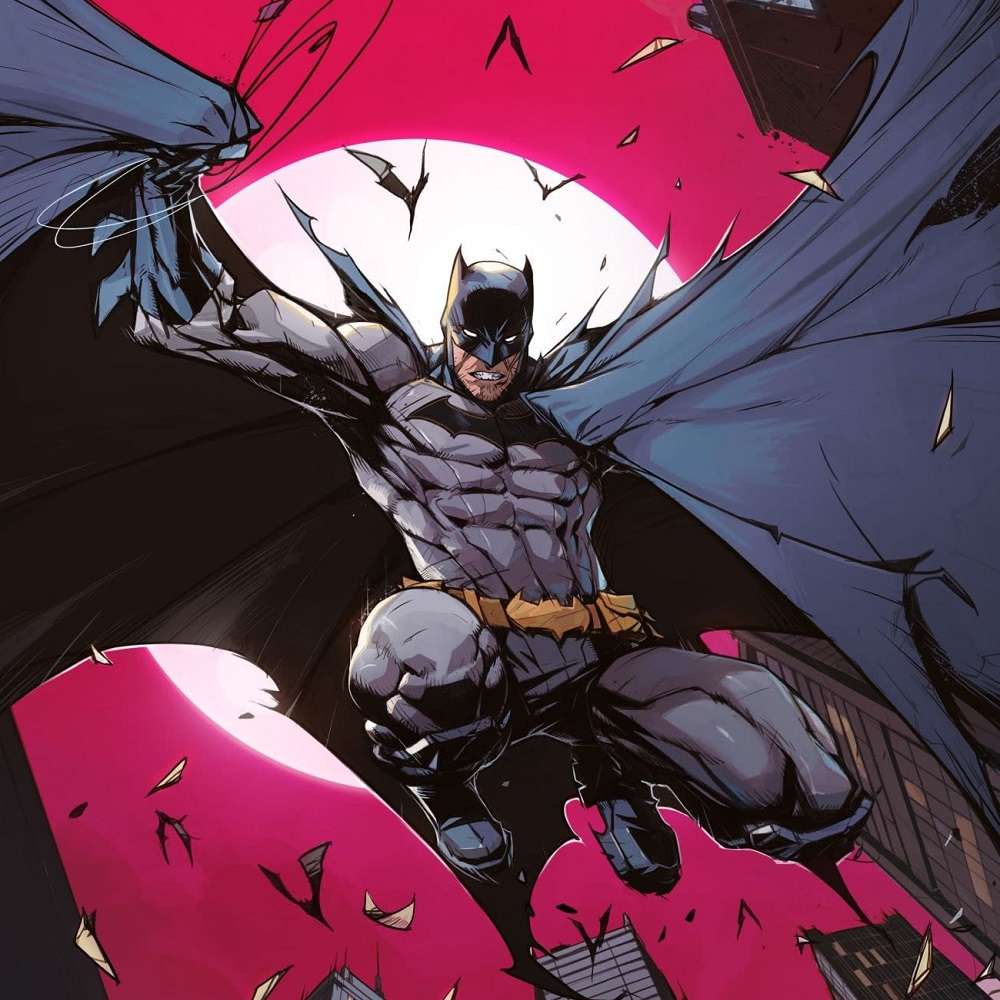 Synopsis: A man is fleeing Red Hood, whose inner monologue is reflecting on how Batman kept the use of fear for himself. Still, Red Hood is using rubber bullets, acknowledging that it’s the compromise he’ll make for working in Gotham. Red Hood forces the man to disclose where he procured the drugs that are destroying the Bowery: cheerdrops. They are actually quite benign or would be, save for the fact that people who take them remain in a totally disconnected euphoric state, causing them to blissfully wander into oncoming traffic. Thinking about the effects on kids, Jason thinks back to some of his time learning to be Robin with Alfred, the latter warning him that he needed to practice. In the memory sequence, Jason discovers the gun collection in the Batcave armory, and Batman explains that he needs to understand guns for his work but that they are a coward’s weapon.

Flash forward, and Batman is forced to rescue a jumper who is high on cheerdrops. On the ground far below, a police officer fires on Batman, saying that the “freaks” are just emulating him. Red Hood enters the building allegedly supplying cheerdrops and enters an apartment where a young woman is comatose on the bed, mouth frozen in a rictus. A young boy cries with fear as Red Hood approaches, but Red Hood comforts him and finds out the father’s name. He comms Oracle for a trace.

Back in the Batcave, Batman has analyzed a sample of cheerdrops and discovers it is a modified version of Scarecrow’s fear gas. But Jonathan Crane is allegedly deceased, as Oracle confirms. Oracle then warns Batman that Jason is also investigating the drug, and Batman darkens: “He’s a killer, Barbara.” As he zooms off in the Batmobile, Batman slips into a memory of preparing to fight Jason. In the memory, Alfred pleads with Batman to acknowledge that they both let Jason down and that Bruce Wayne needs to help him. Batman replies that Jason is killing people, and therefore that Batman needs to stop him.

Red Hood locates the address of the father, pausing to give him his facemask with the built-in communicator, and permitting the boy to choose the superhero name “Blue Hood.” Red Hood infiltrates the drug gang at the address and identifies the boy’s father, named “Andy.” Andy flees, and Red Hood apprehends him by use of a rubber bullet. When Red Hood questions him, Andy explains that he has no use for the mother or his boy, even when he gave the boy some cheerdrops to keep him happy. Red Hood grimaces, raises a gun and shoots Andy. This time, the bullets are not rubber.

Red Hood immediately feels remorse and falls to his knees.

Analysis: This is a fun, interesting story. The usual tensions between Batman and Red Hood are framed nicely (guns and killing). Red Hood is trying to harness his anger so that he can help out as needed in Gotham, but, as ever, it is difficult to keep his anger under control. Anger is a fascinating emotion in comics in general – very obviously there is the Hulk in the Marvel Universe. But there are at least some elements of anger in Batman as well; in the very first episode of Batman The Animated Series, Batman proclaims, “I am vengeance!” There is room to debate the proper role, if any, of anger in who Batman ought to be. In any event, virtually no conception of Batman can tolerate Red Hood’s anger, and the struggle Jason has with himself and with Batman is captured nicely in this narrative.

Fear too plays a role in the story, as Red Hood believes Batman has kept that particular tool for himself. Batman’s narrative is fundamentally rooted in fear, as the Nolan trilogy nicely explores. And the role of fear is underscored by the apparent resuscitation of Scarecrow in the cheerdrops. I love Scarecrow and think he’s a deeply underrated rogue, so it is nice to see him appearing in such prominent roles in both the main book (see Batman #106!) and in this collection. But the rictus on the young mother’s face seems very obviously Joker-esque, so it remains to be seen which rogue is pulling the strings in this narrative.

Synopsis: In a flashback, Harley Quinn and Poison Ivy are robbing Penguin’s Iceberg Lounge. Ivy rescues a plant from the frigid environs and gives it to Harley. Flash forward, and Harley is all alone in some dank greenhouse. She reminisces about good times with Ivy, working on plants in the greenhouse and exploring intimacy in their relationship. Their connection deepens, with Ivy eventually admitting that she loves Harley, but a crack of thunder spoils Harley’s reverie, and she is brought back to the dark, damp, empty greenhouse. Harley notices a plant and realizes it is the very same pot of poison ivy that they rescued from the Iceberg Lounge and which Ivy gifted to Harley in happier times. Harley flashes back to a deep kiss with Ivy and steels her resolve to wait for Ivy.

Analysis: This story is essentially a sneak peek of the forthcoming Harley Quinn #1, as writer Stephanie Phillips notes (Phillips is the new writer for HQ). I love Phillips’s Harley – she is strong, brilliant, and is not defined by her relationship or lack thereof with the Joker. Harley’s queer identity is also important for a number of reasons, and it is awesome to see the intimacy of her relationship with Ivy centered in this short story. She is shocked to realize that Ivy is in love with her, and the dramatic tension builds as the audience wonders what happened to Ivy and why Harley is all alone in the run-down greenhouse.

Laura Braga’s art elegantly sets the differences in mood between the same greenhouse, lit ablaze with the warmth of Harley and Ivy’s relationship, now dark and somber in Ivy’s absence. I can’t wait to see where Phillips takes Harley in the eponymous book!

Synopsis: Black Lightning is incarcerated in a prison somewhere in Japan. He calls for Metamorpho, and, hearing a response, asks if he remembers what happened. He recalls a boat chase, with villains chasing him and Katana. The villains rain magic arrows on them. One strikes Black Lightning in the arm. Katana protects Black Lightning from the arrows. He cannot quite remember what happened after that, but he proceeds to break them out of prison by channeling energy into the floor and walls.

Analysis: I do not read the Outsiders, so I found this entire story extremely confusing. I do like Katana as a character in her own right, but to be honest, this story is likely not written for anyone who is not already following the Outsiders. I am kind of curious to see what happened with Katana.

Synopsis: Years ago, some kind of firefight is going in Midway City. “Cole” is a bit shell-shocked and is having trouble moving to safer ground. A commanding officer tells Cole’s brother to protect him, but suddenly Cole comes to and leaps up, guns blazing. Cole is gravely injured, as is his brother. But then help arrives and they are saved. Flash forward, and Cole Cash, aka, “The Grifter,” takes out two goons approaching a helicopter on the ground with ‘Kurlyenko’ inside. An old man takes a swing at Grifter, and both of them fall into the pool in the struggle. A voice on Grifter’s comm informs him the goons were extra bodyguards for Kurlyenko, who is bobbing in the water next to Cash.

Guests are ogling the scene, and inside the mansion, Lucius Fox is reading Grifter the riot act for his misstep. Fox relents and drops Cash in Gotham City after the party. Cash heads to a club, and after numerous weapons are removed in a pat-down, he is given the all-clear by Penguin, who is accompanied by Nora Fries. After a confrontation, the scene switches to Cash walking alone in Gotham, talking to his partner over the comm. He realizes he is being followed and gets the high ground on Batman himself, putting a knife to his throat. Batman and Grifter scuffle, and Grifter tells Batman he knows who he is under the mask. Batman departs and Grifter asks if his name is “Dave.”

The next morning, Grifter is struggling to stay awake for Lucius, presumably in Wayne Tower. He swipes an ID from a passing security guard and makes his way into an inner sanctum with a serious computer setup. The scene switches to the Gotham River at night, where Batman finds Nightwing at a crime scene. The body is Nora Fries, who according to Batman met Grifter earlier.

Analysis: The story is confusing at first, but it slowly warms up. For all his peevishness and apparent sloppiness, Cash is actually highly effective. We see him fight Batman almost to a standstill in the main book, and here again, he manages to sneak up on the Caped Crusader – no little feat. Batman, like us, wants to understand why Cash is meeting up with Penguin and Nora Fries if he is claiming to work for Lucius. Also, who is Cash’s partner on the comm?

There’s not a huge amount going on in this story, and Grifter still feels a bit derivative, but it’s entertaining enough. Seeing Dick as Nightwing back in any capacity remains thrilling, although it’s not clear why he is in Gotham with Batman. Picking up Nora Fries from the story featured over a year ago in Detective Comics #1016 is a nice touch, although if she is anything more than mostly dead we’ll have to wait a bit longer to find out more about what she was up to with Penguin and Grifter.

I appreciate Gotham-centric narratives, as the cityscape is part of what sets the Batman Universe apart. Nevertheless, the stories in Batman: Urban Legends #1 feel uneven in quality and depth. The Red Hood and Harley stories are excellent, while the Outsiders story feels confusing and niche, and it’s not clear if Grifter is developed or significant enough of a character to carry a story by himself. The collection is worth following for the first two stories alone, though.