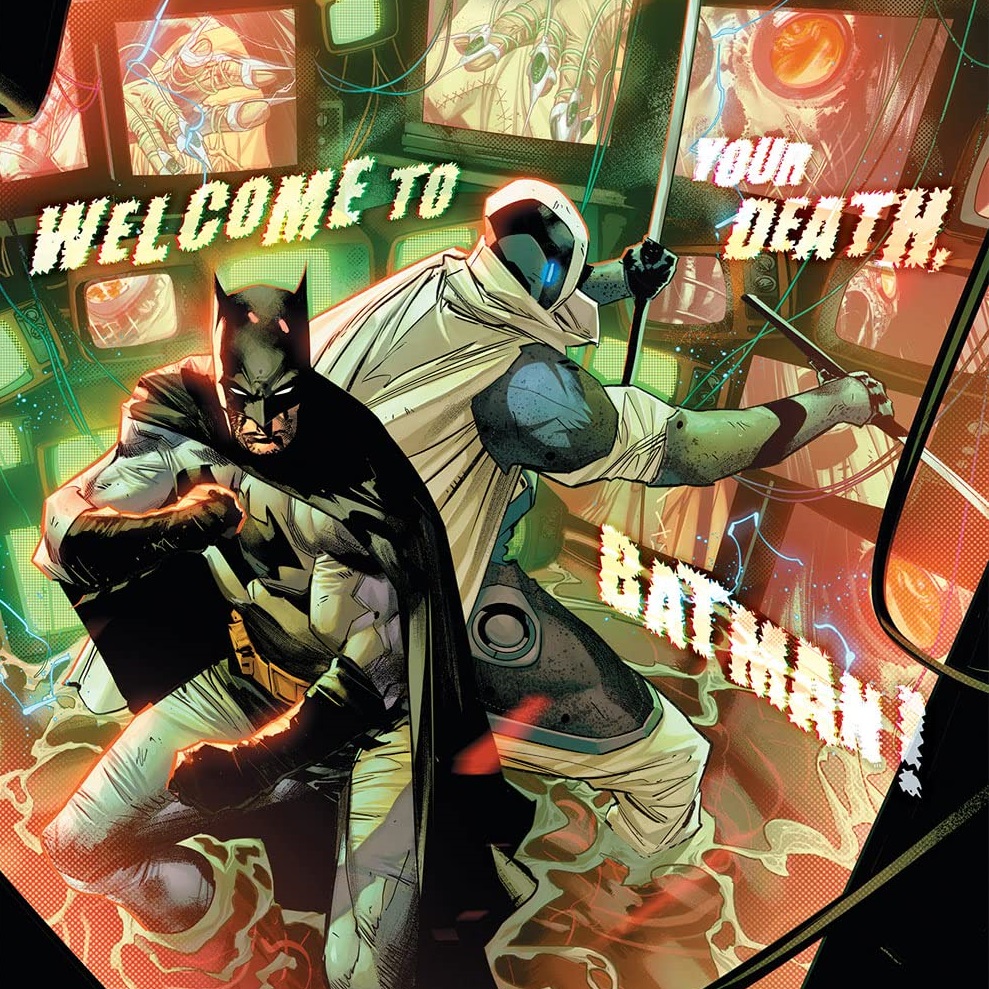 Synopsis: Batman #113 opens with an escaped Batman swinging through Gotham while the “Anti-Oracle” loops fear-mongering broadcasts. Barbara Gordon is in the Clocktower trying to get her system back up and running, and Harley Quinn and Gardener are in the sewers, beginning their trek to save Poison Ivy.

At GCPD headquarters, Batman pays a visit to Commissioner Renee Montoya. He tells her that Saint Industries is behind the City Hall bombing, that the Unsanity Collective are scapegoats, and that Peacekeeper-01 has been dosed with fear toxin. Montoya tells Batman that she believes in him, but she also tells him that she’ll need evidence of all of this to successfully put an end to the chaos.

After Batman leaves, he’s assaulted by Magistrate drones. While Simon Saint watches Batman take down his drones over a video feed, Batman tells Saint that he knows what’s going on and will stop the Magistrate.

At Fort Graye, Batman goes through some boxes until he finds an old device Cyborg and himself worked on. As Ghost-Maker calls it, it’s a “Bat Mind Control Helmet,” and it’s supposed to detect if there’s anything implanted in Batman’s brain. Batman asks Ghost-Maker to help him use it. Since it can cause damage to a user’s moral core, Ghost-Maker surmises that he’s to help Batman because he has sociopathic tendencies.

Inside Batman’s brain, Ghost-Maker and Batman uncover subliminal programming implanted by Scarecrow. Batman disappears, but Ghost-Maker battles shadowy versions of Batman, slaying them, before finding Batman locked up in a cell. Ghost-Maker frees his friend, telling Bruce Wayne that Batman already survived a fear state, so this programming won’t work on him. Then, Ghost-Maker tells Batman that he’s been keeping something from him.

Ghost-Maker takes Batman into his memory now, after the two had parted ways. Ghost-Maker wanted to study emotions, particularly Batman’s fear, so he attended Gotham University for a week. It was there that Ghost-Maker met Dr. Jonathan Crane, still a graduate student then.

In this memory, Crane tells Ghost-Maker about his idea of the “Fear State” and how it can help level up people to their next evolutionary state. He explains it in full, this time so Batman can be clued in to what’s going on. Crane notes that his unpublished paper had been making the rounds in Silicon Valley, which, as Batman surmises, is where Simon Saint learned of it.

Elsewhere, Peacekeeper-01 is freaking out and still under the control of Scarecrow. Peacekeeper-X arrives, and the two argue. Before the issue closes, Batman guesses that Scarecrow is using mind control on Peacekeeper-01 to ignite the match to create a fear state.

Analysis: If you’ve been keeping track, this is the third issue in a row (including Batman: Fear State: Alpha #1 and Batman #112) where we’ve had the idea of a “fear state” explained to us. If you found yourselves zonking out during the last two lectures, Batman #113 is here to refresh your memory on what a “fear state” is. The bad news is, other than testing out this theory, we still have no idea what Scarecrow wants. Is he seeking control of Gotham? Is he going to use this fear state to create anarchy? Is he going to turn Batman into his fabled “scarecrow” that citizens will need to overcome in order to evolve? Since Batman is rumored to be leaving Gotham after the Fear State arc, it’s a good bet that the last one is most likely Scarecrow’s goal, but we’ve been given no explicit explanation thus far into the arc. It’s just a guess, one that would make sense with the theme of the Magistrate and no more vigilantes that have been a staple in Gotham for a year now.

Other than rehashing lectures about what a fear state is and reminders as to each character’s motivation, we really haven’t been given anything new. Prior to Fear State, readers were shown foreshadowing images of Batman strapped to a chair, a hostage of Scarecrow, for six issues straight. This was the tantalizing lead-up to this event.

At the beginning of Fear State, Batman escapes, and in Batman #113, he effortlessly has Scarecrow’s mind control removed by Ghost-Maker with little to no tension or fanfare. This, above all, makes the whole Fear State event feel like wasted potential. Much like Simon Saint in his big UFO in the sky, we’re beside ourselves as James Tynion and Jorge Jimenez’s final arc together limps along at a snail’s pace with little energy nor much struggle.

The art is absolutely phenomenal, as usual. Jimenez and colorist Tomeu Morey create such vivid, vibrant work together, and it’s just magic to behold. Particularly in the fight scene Batman has with Magistrate drones, there’s an energy that shines through, hinting at a terrific, action-packed arc buried beneath the mounds of repeat exposition. We get to glimpse it for a few panels, and then we’re bogged down with the same information we’ve been buried under for three issues now. Whenever Jimenez and Morey show us a fantastic panel, our excitement gets zapped on the following page, as we’re hit with characters who have little to do and seemingly nothing pressing to overcome. We’re on a magnificent ride with no discernible destination, and that’s frustrating.

Synopsis: In the backup for Batman #113, Clownhunter runs through an alley, trying to wrap his mind around what’s happening to him. Suddenly, one of those Joker monsters from the last issue breaks through a wall. Clownhunter leaps through a window, only to wind up in his parents’ old restaurant. In this vision, his parents are very much alive until they’re eaten by that Joker monster.

Clownhunter breaks down, screaming that he can’t witness this again. When he looks up from the floor, he’s surrounded by more of those monsters. Clownhunter guesses right that he’s still falling, and no one’s caught him yet.

Analysis: After the last issue, when Clownhunter realized that he was having nightmares while still falling from atop a roof, it seemed like this story was going to move on. In this issue, Clownhunter cycles through the same realization again. Yet again, Clownhunter is faced with another nightmare, and by this story’s end, he once more realizes that he’s still falling. Is that how this three-issue arc is going to play out? Will Clownhunter just fall for three issues and finally come to?

The art by Jason Howard is trippy and fun. It feels very punky and fitting for a character like Clownhunter, and the fact that everything is a nightmare means Howard has a lot of room to play around with visuals. He does it well, but like Jimenez in the main story in this book, he has no destination in sight. Once more, we are just recycling what happened in the previous issue, which is a shame.

Batman #113 is an exhaustive exercise in repetition with incredible art. Your eyes will love the visuals, but the lack of story and repeat exposition will make you weary.