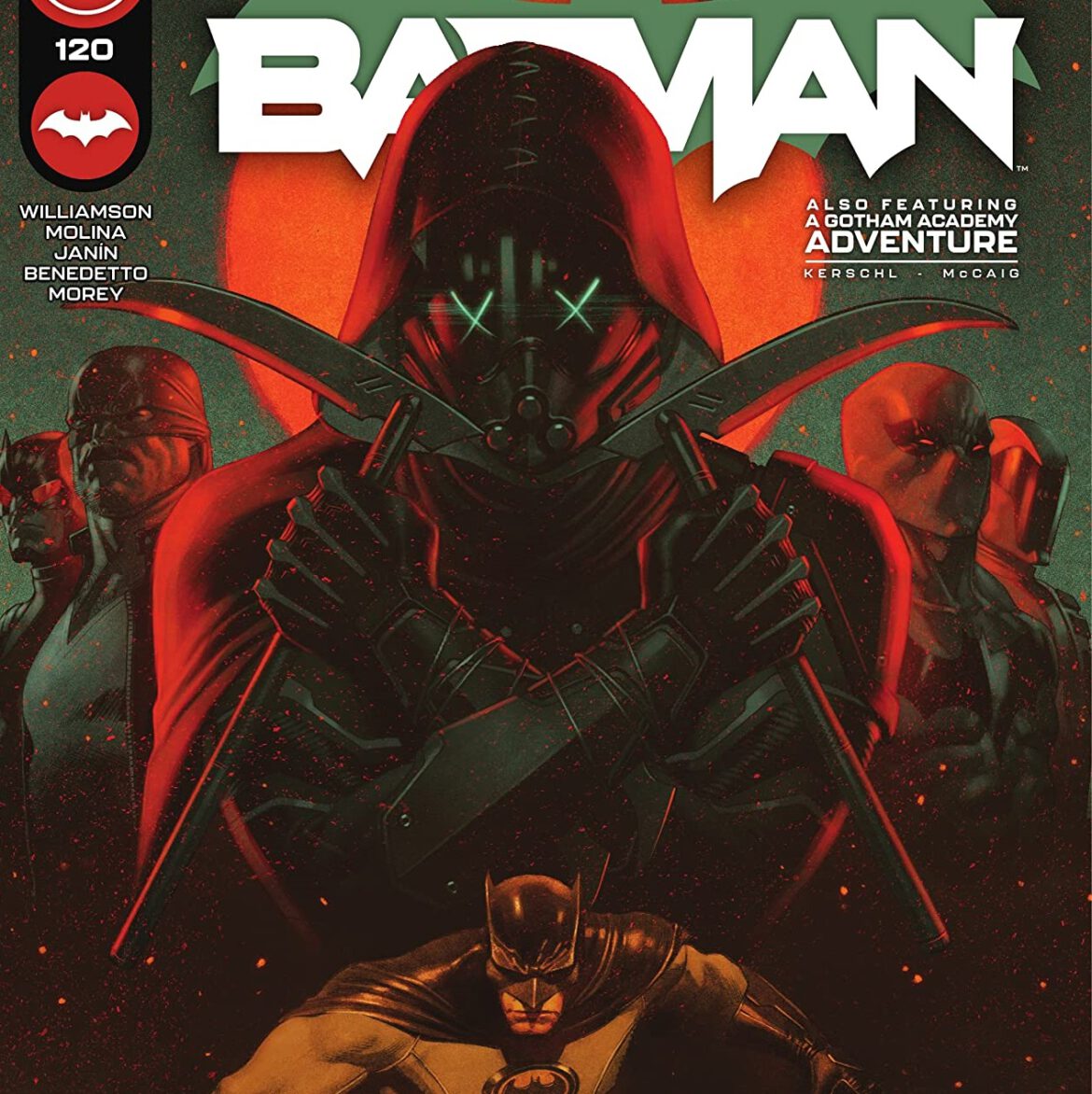 Overview: In Batman #120, Batman must break into a high-security prison in order to talk to the incarcerated members of Batman Inc.

Synopsis: Batman #120 beings in Badhnisia, as Detective Cayha wheels out a sealed body bag from the police station. She tells the police chief that it’s the body of Abyss and that she’s rushing it over to Lex Luthor. Once inside a police van, Batman cuts through the bag. He tells Cayha that he needs somewhere dark where he can heal up and examine his eyes, which were blinded by Abyss in the last issue.

At the Lexcorp building in Badhnisia, Luthor threatens the police chief with losing funding if officers aren’t sent to protect Lexcorp within the hour. As Lex mulls over the situation, the lights go out. Lex quickly activates his new power suit, which is a Batsuit he designed for Bruce Wayne (should Bruce have taken Lex’s offer from the last issue). Abyss attacks, but Lex is ready.

At Detective Cayha’s apartment, Bruce takes off his mask and sits in the darkness. He tells Cayha that he believes Abyss is still alive. Cayha deduces that Batman is trusting her because she has a personal stake in capturing Abyss. Batman figures that his next move is to find out why Batman Inc. tried to kill Abyss. As Cayha stitches Bruce up, she tells him that the members of Batman Inc. are in a prison built by Lex Luthor.

As Man-of-Bats, El Gaucho, Bat-Man of China, Dark Ranger, and the Hood are moved to solitary confinement, their escort is halted and cast in darkness. Batman has arrived, and he orders them to the roof, so they can debrief Bruce on the Abyss situation. The Hood refuses to go anywhere with Batman, despite Batman telling them all that Abyss isn’t dead.

When Batman asks the members of Batman Inc. why they would work with Lex Luthor, they merely tell him that Lex gave them a mission. When Batman presses, they attack. Detective Cayha serves as Batman’s eyes as he deflects their blows.

Prison security arrives, and Batman and Batman Inc. flee. They make it to the roof, just as Lex Luthor arrives. For some reason, Luthor is the only person or object that Batman can see. When he demands to know why the newly freed members of Batman Inc. finally reveal why they did what they did. They all work for Abyss, and they’re going to kill Lex Luthor. Abyss stands at the forefront of a united Batman Inc.

Analysis: Artists Mikel Janin and Jorge Molina and colorist Tomeu Morey make an enviable team when it comes to the look and feel of Batman #120. This issue is breathtaking. There’s a grittiness and a noir aesthetic to the scenes with Batman as he sleuths out what’s going on with Batman Inc. Yet, there’s also this vibrant undercurrent that both resonates with the detective storyline and brings some much-welcomed shades of color. For example, Detective Cayha is frequently cast in purple hues throughout the book, as is Lex Luthor with his trademark green. It’s a beautiful contrast to the gray and blue shades cast over Batman and is such a joy to look at.

This issue just GLOWS, and it’s worth picking up just for the exemplary coloring and paneling.

The story, however, is an entirely different mood. Joshua Williamson is midway through telling his big caper (that introduces this new villain named Abyss), but with all of the big reveals in Batman #120, there doesn’t seem to be a coherent narrative. Little details are missing throughout, which hinders the clarity of everything going on.

Detective Cayha, for instance, has been hunting Abyss for some time. It’s revealed that her parents went missing when she was young, which is why she works in the missing persons department. This eventually led to her working on the Abyss case, though it’s not made clear what the connection is. Is Abyss believed to be involved with some of the missing people Cayha is investigating? Is there a connection to her missing parents? These questions are hinted at, but there’s nothing explicit. She correctly deduces that Batman trusts her because of her background, but is it because she knows something about Abyss or because she, too, lost her parents?

Lex Luthor also has a vested interest in Abyss, and it is likely more than just because Abyss wants Lex dead. Abyss, to that end, somehow infiltrated and took control of Batman Inc., giving its members the sole mission of killing Lex Luthor. He also attacked Lex at Lexcorp, but then shows up at the same time Lex does at the book’s final moments. What happened with the fight? We can assume it was a draw, but maybe there’s something else to their relationship that will yet be revealed and elaborate on why we didn’t see a fight? There are a lot of “why’s” that can be asked, and we get no reasons. This information is just dumped on readers, along with a snazzy new Lex Luthor Batsuit (Hey, he made a cool Superman, so why not a Batman, too?) and information that Batman’s blindness might be nanotech-related.

It’s a lot to sift through and connect together, and with so much revealed in one issue, the story in Batman #120 feels like it is tripping over itself as it races to the action. If Batman Inc. is run by Abyss, why did Luthor want Bruce to join Batman Inc. so badly that Lex went ahead and built a new Batsuit? The timeline to all of these happenings is muddied and overwhelms the senses, and readers may be left with way more puzzling questions than they bargained for.

Hopefully Batman #121 will provide some much-needed clarity to what Abyss’ deal is, what his connection to Lex Luthor is, and why Batman Inc. is even involved in the first place?

Synopsis: The backup in Batman #120 takes place sometime in the past, as Maps Mizoguchi finds a little, frog-like creature called a kappa floating in a dirty harbor. Maps picks it up and rushes the kappa home.

In the present, Batman battles a horde of kappa underwater. He fends them off, then resurfaces just in time to hear Maps calling him over the comm. She tells Batman about kappa, citing details of note about their physiology and appearance. Maps informs Batman that kappa love cucumbers and Lindsay’s bedroom had cucumbers all over the place. When Batman doesn’t answer, Maps asks the Batmobile for his location and details on any physical damage he may have undergone. She then sets out to rescue him.

In the sewers, Batman plunges deeper into this mystery, coming across the body of a woman. He’s attacked by more kappa, who bite and tear at him. Maps arrives just in time with cucumbers. As Maps leads Batman to safety, Batman notes that the body belongs to Emily Corker, who has been missing for a couple of days. As they exit the sewer, a girl’s voice calls to Maps from out of the darkness.

Analysis: This Maps Mizoguchi-focused backup story has been a delight to read thus far. Since it’s mostly told from the perspective of a child, it’s lighter in tone, both in its coloring and upbeat, funny dialogue. Maps proves to be quite the fun protagonist as she helps a stoic Batman get to the bottom of these multiple missing persons.

Compared to other backups featured in the main Batman title over the last year, this is arguably one of the best stories. It keeps the reveals and plot twists at a minimum and instead relies on charming characterization to disarm readers.

Batman #120 is an absolutely gorgeous issue, but good luck making sense of the mystery so far. The Maps Mizoguchi backup, however, is pure joy.