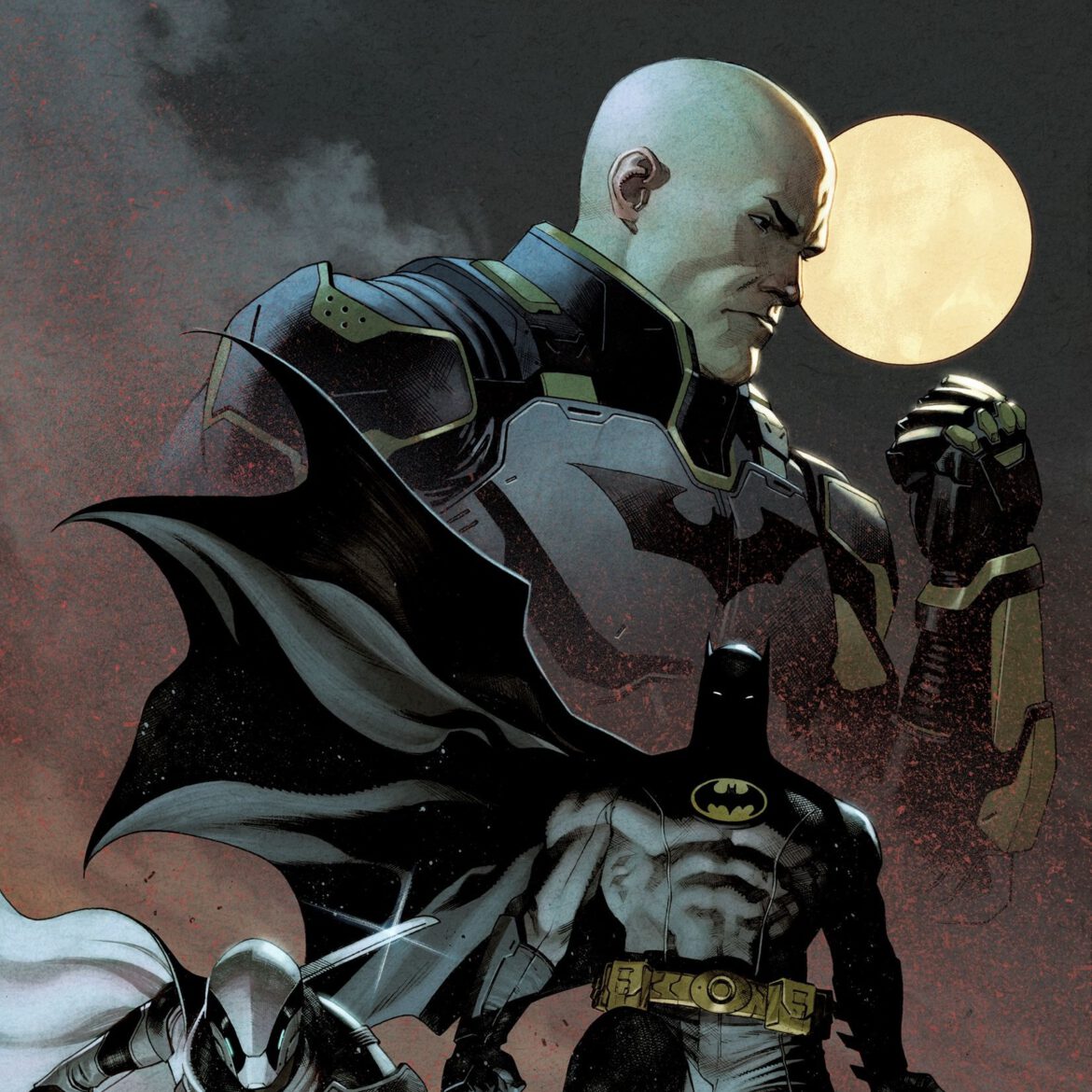 Overview: In Batman #121, Batman and Batman Inc. put a stop to Abyss and Lex Luthor’s meddlings in Badhnisia, while the backup continues the adventures of Maps.

Synopsis: Batman #121 begins back when Bruce Wayne made his formal announcement to create and fund Batman Inc., Lex Luthor took notice. He asked Mercy to pull up data on the most dangerous location in the world, Badhnisia, then asked her to prepare his jet.

In the present, Abyss stands with members of Batman Inc. against Batman and Lex Luthor. Abyss declares their intention of killing Lex Luthor, and if Batman joins them, Abyss will give Batman his sight back. Just then, Detective Cayha bursts onto the roof, gun raised.

Helicopters arrive, and guards start filing up the prison stairs as Abyss and Batman Inc. attack. Lex tells Batman that he should have joined Team Luthor earlier, as Batman is now useless without his sight. Batman reminds Lex that, for some reason, he can see nothing except for Luthor, acknowledging that it has something to do with the tech Lex and Abyss are using.

Before the fight can get too far along, Batman commands code “Club of Heroes.” Batman Inc. suddenly switches sides. As they all gang up on Abyss, Abyss reveals that Lex created him, then let him loose in Badhnisia, effectively abandoning this would-be Batman.

Abyss is about to kill Lex when Detective Cayha intervenes. Abyss flees. Batman thinks for a minute, remembering comments made to him by Oracle, Alfred, and Detective Cayha. He remembers Oracle telling him not to hide in the dark and lick his wounds, as well as Alfred informing him that there are enemies who hide in the light. Batman tells Lex that he could use the assist, then connects into Lex’s gauntlet. He borrows Lex’s tech, then leaps after Abyss.

Batman tracks down Abyss and blinds the villain with white light. He knows that Lex wouldn’t have created a new villain without having some sort of technology-based way to shut that villain down. The two fight, and after Abyss blasts Batman with something, Bruce’s vision returns. Though Batman gains the upper hand, Abyss escapes.

Detective Cayha informs Batman that they’ve found all of the people Abyss captured. When he tells her that he’s leaving, she pleads that Badhnisia could use Batman. Batman says that it doesn’t need another Batman, it needs her. He tells her to let him know when she’s ready, though Batman doesn’t explain what that means.

At the prison, Batman Inc. informs Luthor that the team never cashed his checks and that he doesn’t own them. They also reveal that they baited Luthor into coming to Badhnisia and now have a list of other experiments, like Abyss, that he’s been working on. They can’t connect everything to Luthor, but they can stop the experiments.

After Luthor leaves, Batman Inc. asks Batman how he knew that they weren’t really working for Abyss. He told them that during their first fight, he noticed that they were pulling punches. As Batman is about to leave, El Gaucho tells Bruce that just because he moves on doesn’t mean that the world does. They have been working on this case since Batman Inc. was first founded.

Dismayed that Batman is leaving again, Batman Inc. calls him out for merely giving them a pat on the back. Bruce tells the team that he’s needed elsewhere, referencing a call from Oracle about problems at Arkham Tower (as seen in Detective Comics).

After the Arkham Tower event, Batman tells Oracle that she was right. It’s hard for him to celebrate the wins. Afterward, he asks for Ghost-Maker to keep a watch on something.

In another epilogue, Detective Cayha enters one of Lex Luthor’s labs and finds many vats of something secret and hidden. Lastly, Prometheus informs Deathstroke that Batman is back in Gotham. Deathstroke is pleased, but he wants to make sure Batman stays distracted while they work on their secret plan.

Analysis: This Batman interlude has come to a close in Batman #121, and it’s revealed that Abyss was a prototype Batman that Lex Luthor was working on. This news isn’t a surprise, though it does undermine the impact of Abyss, who is a new (and probably forgettable) villain to the Batman Universe.

Though clunky in the reveals and misdirects in this short global adventure, writer Joshua Williamson adds some heart and meaning to this story. At its core, this story is about Batman’s inability to celebrate the victories and his repeated behavior of leaving others in the dust when they could use his support. Though it’s only hinted at, Batman realizes that he left Batman Inc. in the dust once before. He doesn’t do anything other than acknowledge it this issue, though, as the Arkham Tower problems in Detective Comics need his attention. The acknowledgment is nice, but Batman up and leaving renders the point moot.

The end of this story hints at a greater role for Detective Cayha in the future, though it stops at confirming what Batman has planned. He sees her as a greater ally abroad, though not necessarily another person to don the cape and cowl. The other epilogues tease more Lex Luthor madness and the upcoming Shadow War event at DC.

The art from Mikel Janin and Jorge Molina and colors from Tomeu Morey are terrific and quite eye-catching, but that’s about all readers get with this story. The plot is all over the place, and readers’ interest really hinges on how much they enjoy the fluid action moments and absolutely beautiful shots of Batman, Abyss, and Luthor in his very own Batsuit. It’s a pity that this story wasn’t more interesting, as it’s nice to see Batman put in some actual detective work.

Synopsis: After finding Lindsay in the last issue, the backup in Batman #121 sees Maps question her on how she’s survived this long. It’s revealed that the kappa think Lindsay is their mother, and they have been trying to feed her. She asks Batman and Maps not to beat up the kappa.

After rescuing Lindsay, Batman drives Maps home, telling her to limit her crime-fighting to school grounds. He will find Lindsay’s grandfather, who is still missing.

After doing some thinking, Maps remembers that Lindsay said that her grandfather brought over a kappa initially when he came to Gotham, which was about eighty years ago. She deduces that the grandfather is still out there with an elderly kappa. Using a flower she left in the Batmobile, she is able to communicate with Batman that she’s going to need help at Lindsay’s house.

At Lindsay’s house, she finds a room where the grandfather’s body is lying, presumably dead. As she approaches it, an elderly kappa comes towards her, looking to eat her. Batman intervenes, saving her. He gives her a hug after and finally calls her Robin, which is what she’s wanted this whole time.

Analysis: This Maps Mizoguchi backup has been the better story in these past few issues of Batman. The latest entry in Batman #121 has a bit of a nothing ending, though one caveat is when Batman finally comforts Maps by referring to her as Robin. Despite nearly dying and all of the struggles in solving this case, she’s still enticed by this idea of being a crimefighter alongside Batman, of being a semi-official Robin welcomed into the Bat-Family.

It’s cute and fun, and it might be the palate cleanser that readers need after a lackluster main story.

Batman #121 brings the caper of Lex Luthor’s ownership of Batman Inc. to an abrupt end. This issue is bewildering and lackluster, though there is some heart to round out the rough edges.