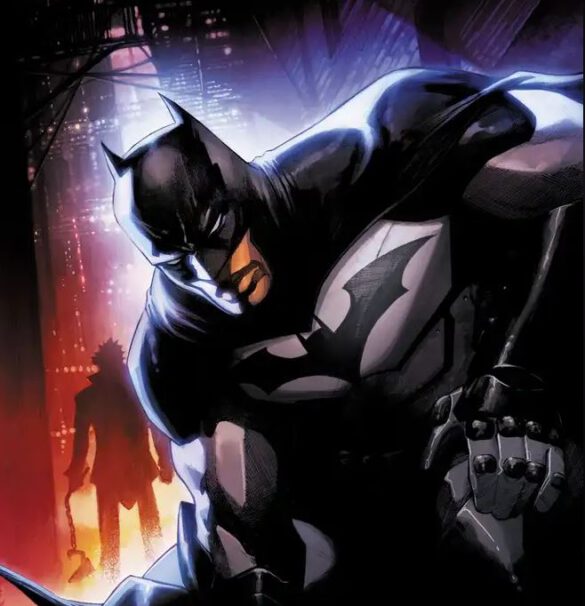 Overview: In a quieter issue, I Am Batman #9 spends time exploring the characters. Jace learns what it means for him to be Batman and he decides to take a different road than the original Batman.

Synopsis (spoilers ahead): As I Am Batman #9 begins, Batman is still reeling from his previous disastrous encounter and tracks down a thug. He easily takes him out, almost beating him to death. He would have killed the man if not for Detective Chubb pulling him off.

Meanwhile, Vol is talking to a real estate agent. He is trying to find the Batman’s new base of operations, so he has to play the part of a Russian financier. Elsewhere, Tanya is in a meeting with the mayor. She is concerned about the allegations that the late police commissioner was a racist, sexist homophobe. Carmichael arrives to tell the mayor that the press is asking for a comment. This pulls him away from the meeting.

Chubb, returning to her office, finds Keenan searching her computer. Later Chubb meets Batman. She tells Batman that Keenan was looking up their files on the murder of Commissioner Becket. Batman tells her to let him. She insists that they have to mind the killer first to get them into a courtroom before Keenan, or others like him, kill him.

Now Jace is talking with Tam while she is rehabilitating. Tam, however, senses that something is up with Jace. Tam tells him that he acts like Tiff, who blames herself for her condition. She insists that they need to be there for their sister.

Later in Central Park, Hadiyah finds Jace on a bench. She approaches him. Jace actually called her; he asked for her help with the murders. Jace believes that Hadiyah knows about character, and he is looking for her insight. She mentions the artist Man Ray who was a surrealist artist. She decides to take Jace to the museum and show him the works of Man Ray. After discussing surrealism with him, he asks her if she knows anything about the hotlist. She does not but tells him she will ask around.

The mayor is holding a press conference which the killer is watching. We see that the killer is preparing something, but we do not see what that is yet. Tiff talks to her mother. She feels lost and does not know what she is supposed to do. Tanya suggests that she work at their Job-Training Center. Jace meets up with Vol. Jace gives Vol the profile Hadiyah gave him. This concerns Vol. He is afraid of Jace letting her in that he is Batman. Jace changes the topic and asks about the headquarters search. Jace needs help from his team. Now Batman meets with the unit. He gives them a list of the people and suspicious activities that fit the profile for Manray, the designation he gave the killer. Batman knows his mistakes earlier, and he knows that people are counting on him. The team splits up to investigate the list.

Mueller calls Chubb; she found something. Chubb and Batman arrive, and no information has been leaked by radio. We do see that they are being followed however. It is DeSante, one of Keenan’s cops. Chubb and Batman enter and find a shrine detailing the crimes of Mayor Villanueva. He looks like the next target.

Analysis: I Am Batman #9 is a quieter issue. There are no real action sequences other than the opening sequence of Batman with the masked thug. The rest of the story features vignettes involving the characters that are linked together terrifically. One scene is basically written into the next. We get insight into the characters and their relationships. None of the main characters in this story is left out. We see Chubb dealing with the old guard cops. Batman is dealing with his failure in the previous issue. We see Jace interacting with Vol, Tam, and Hadiyah. We see Vol’s search for a new headquarters and Vol’s concern about letting Hadiyah in. Most importantly, we see Batman forming his team. He is learning that he cannot go about this alone; he needs help from his family, friends, and the police.

The art is dynamic and gritty in I Am Batman #9. The artists do not shy away from detail. Batman’s beating is brutal; we see the blood on his knuckles. It is easy to see that if Chubb had not stopped him, he could have killed this man. Each of the characters drawn are unique. We are getting to know the characters and what makes each of them unique. They are not just the cookie-cutter girls and boys, but each has a personality and mannerisms of their own.

As we explore these character moments, we also feel a slow boil. Something will break, and the reveal that the mayor of New York may also be hiding a secret life is the catalyst for the next explosion.