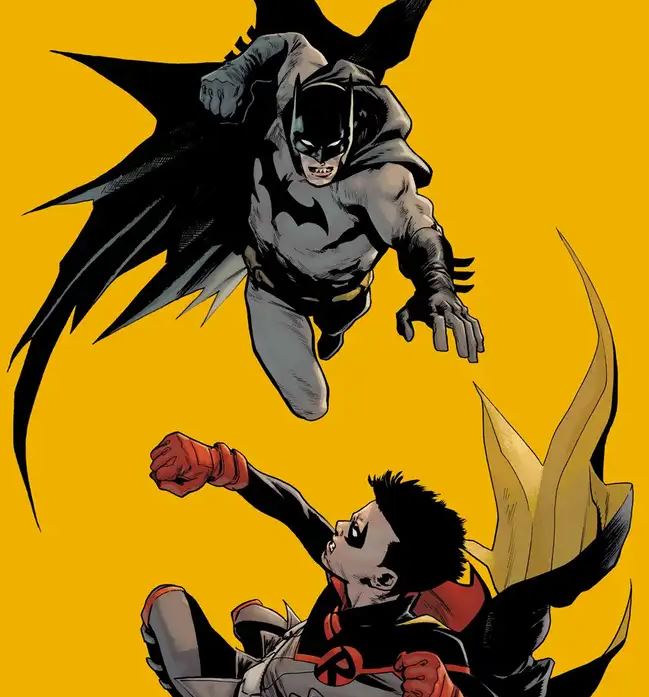 Overview: In Batman vs Robin #2, Batman and Alfred Pennyworth enter a portal to the House of Mystery to learn who cast a spell on Robin (Damian Wayne).

Synopsis (spoilers ahead): Batman vs Robin #2 begins in Atlantis, as Jinx and Tannarak break into a sacred shrine and try to steal the mystic gem of Ahr’iahn. Immediately, they’re swarmed by Atlanteans, but Tannarak easily defeats them with a single spell. The two then return to Mother Soul with the gem in hand.

Back at Mother Soul’s base, Tannarak and Jinx run into Klarion and Zor, who are returning with Ragman’s soul suit.

Robin (Damian Wayne) watches as Devil Nezha forces Black Alice to drain magical items of their power. When she resists, Nezha threatens to put her under mind control. Robin stays back, and Mother Soul notices his reticence. When she calls him on it, he tells her that he doesn’t want to see Alice’s suffering.

In Kentucky, Felix Faust is tormented by his own magic, which is going haywire. Batman arrives and subdues him, sparing Faust’s life in the process. Afterward, the ground erupts from below, and a house appears. Zatanna sent Batman and Alfred here in Batman vs Robin #1, and it’s here where they will find answers.

Abel welcomes Batman and Alfred to the House of Secrets. Inside the house, Batman and Alfred walk through a doorway and plummet into a pit, where they see Robin battling a monster on Lazarus Island. They see Mother Soul and learn that she is the mother of Ra’s al Ghul.

The battle disappears, and Batman muses that this island feels familiar somehow. Before he can think about it, Alfred and Batman are assaulted by tiny monsters. Everything goes green, and they are greeted by Cain, Abel’s brother. They find that they are now in the House of Mystery.

Batman and Alfred walk into a theater and are treated to a show. There, they see Mother Soul again, and she speaks about the origin of Lazarus and its connection to Devil Nezha. Batman and Alfred learn that Mother Soul guided Damian to find the key to free Nezha in World’s Finest #5.

Before they can continue on, Batman and Alfred are overwhelmed by a flood of Lazarus. They find themselves back in the house and are greeted by Cynthia. After some back and forth with her, the two stumble upon a memory of Robin using the key to free Nezha. It’s here, facing this tomb, that Batman finally remembers the events of World’s Finest #5.

When Batman cries out for Robin not to do it, Damian reveals that he’s orchestrated this whole journey. He attacks Batman and Alfred, and the two barely escape from the burning house.

Back at Nezha’s hideout, Robin informs Mother Soul that he’s baiting Batman into a trap. She gives him a costume, and it’s the infamous Batsuit from Batman #666. When Robin asks about accessories, Mother Soul offers him mind-controlled members of the Bat-Family.

Meanwhile, Batman recuperates with Alfred. He tells Alfred that he’s always at his best, with Alfred at his side. As the two dust off and walk away, it’s revealed in Alfred’s shadow that he is being controlled by Nezha.

Analysis: Batman vs Robin #2 continues to be an odd book. This issue leans even more into the magic realm, with most of its pages devoted to recounting Damian’s falling under Nezha’s spell, as well as Nezha’s freedom from incarceration in World’s Finest #5. Despite writer Mark Waid and artist Mahmud Asrar peppering action elements throughout, this issue is very slow.

Much of the clues that Batman and Alfred unravel are already known to the reader, and in turn, this makes the issue a dull read. There are some highlights, though. The relationship between Batman and Alfred carries much of the book. It’s nice to see these two together again, and it’s even better in the sense that they only have each other to rely on.

Of course, this gets thrown out the window in the final panel, as it’s revealed that Nezha is also controlling Alfred.

Other than that, this issue really leans on DC universe cameos. Readers are treated to characters from other series, including a couple of characters most famously known from The Sandman series. It’s nice to see characters like Cain and Abel, but those cameos don’t make up for the very slow retread of a story. This is especially frustrating when a majority of the book is devoted to Batman and Alfred wandering through a dream-like landscape where it feels like there are no stakes and thus no tension. To put it bluntly, this issue feels like filler.

Asrar’s linework isn’t the most exciting, either. Though Jordie Bellaire adds some wonderful splashes of color, the art in this issue can’t pick up the slack. It does the job, but it isn’t asking readers to take a closer look.

Batman vs. Robin #2 feels like a filler issue, retreading information already known to the reader. It’s disappointing, but one can hope that the next issue picks up the pace.