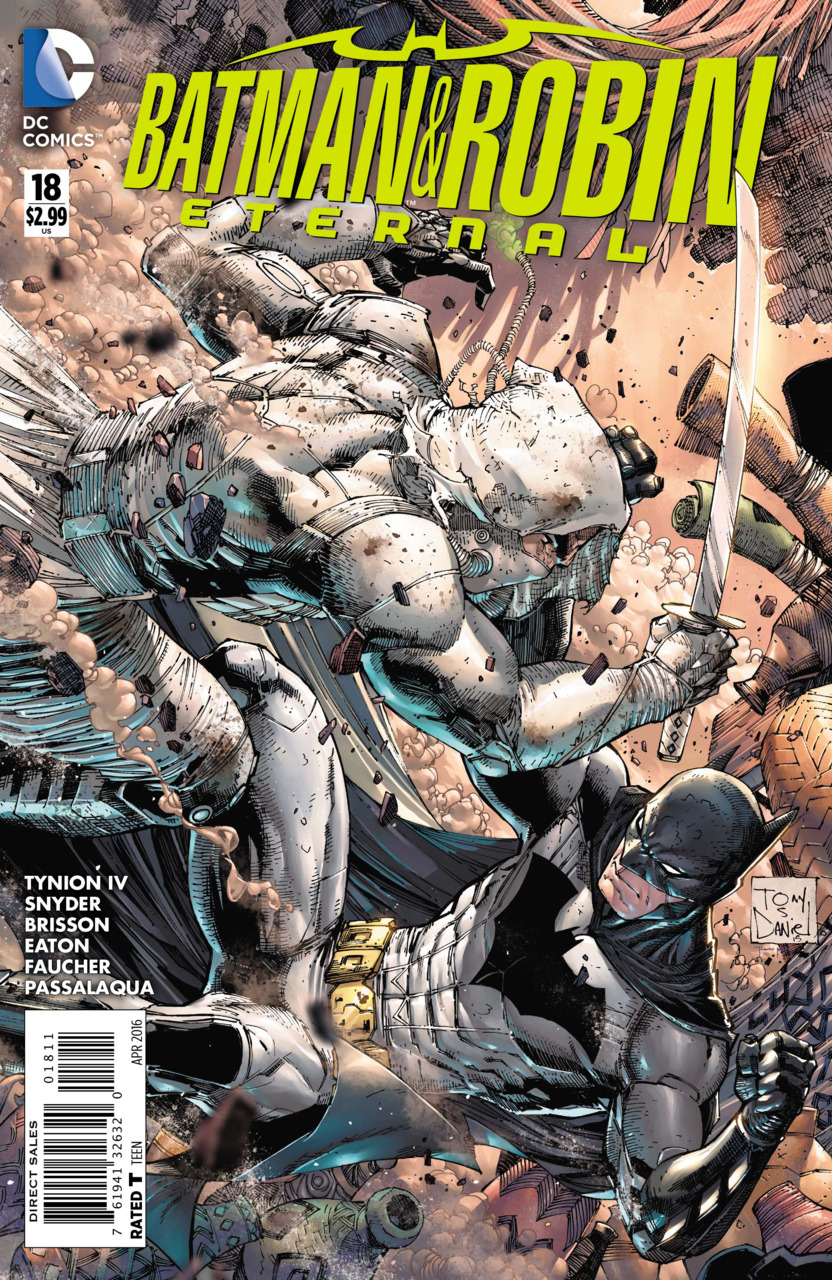 The inevitable result of bringing an enemy into your secret base occurs. Oops.

At Spyral headquarters (St. Hadrian’s), Tim Drake presents what he and Jason Todd found out about the Ichthys virus to Helena Bertinelli and Dr. Netz. While it can be overcome on an individual level, as Jason and Tim proved in the last issue, that approach isn’t viable if Mother deploys it across a huge range of people, which they believe is her endgame.

Meanwhile, Harper continues confronting the Orphan (David Cain – side note – Poppy, the cannibalistic Spyral employee who attacked Dick Grayson in the beginning of this series, is watching all this from the next containment tube over, finally confirming her status). He tells her Cassandra Cain has killed, and the story flashes back to Mother and Batman’s confrontation in Cairo, Egypt.

Batman traps Mother under debris, but before he can take her in, she gives him a remote and tells him to watch as Cassandra murders the parents of his true Robin replacement in Gotham. He desperately tries to contact Dick, but Mother has jammed all signals except for the video feed.

In the present, Harper’s dawning horror as she realizes who Cassandra killed feeds Cain’s joy. Mother and Cain, in parallel timeframes, reveal that the victims were Harper’s parents, and that after killing her mother, Cassandra couldn’t finish the job. Cain taunts Harper with the knowledge that Batman knew his game with Mother cost her own mother’s life, and denied her the chance to be Batman’s partner. After delivering this message to Bruce, Mother crunches a pill, and appears to die of cyanide poisoning, foaming at the mouth. Batman attempts to give her the antidote, but policemen show up led by Mother’s child, and is forced to flee from massive amounts of gunfire.

Tim and Dr. Netz are attempting to deduce Mother’s geographical targets when they realize that schools are ideal for her purposes – and they are currently in a school of highly trained teenage assassins. Just as this idea hits them, a high pitched squeal blasts through the school – Mother’s virus transmitted audibly. The Spyral and Robins team locks down their room, but Dick realizes that Harper isn’t with them. The issue ends with a shot of Harper, devastated, sitting in front of David Cain and Poppy’s containment tubes, as Cain smiles gleefully.

Ed Brisson turns in his final issue, and while overall, his contributions have been competent, his flashback-heavy arcs haven’t really provided any standout moments. This issue, while not as gorily abandoned as Cassandra Cain’s backstory, still pushes her origins into darker territory with the story of her first kill. Originally, she was assigned to kill a gang leader, and the realization broke David Cain’s hold on her. In this continuity, she murders Harper’s mother, and while that does present some dramatic possibilities, it falls a bit flatter than her original story for a number of reasons. First, this revelation took far too long for the team to deliver. Many readers predicted about ten issues ago that Cassandra’s victim was Harper’s mother, and the flashback here didn’t heighten the tension or tragedy, just slotted backstory A into narrative hole B neatly.

Scot Eaton provides art here – and though he’s the only credited artist, some reviewers claim that there was uncredited pencilling in the final section of the book. Given the inconsistency of those pages, this speculation makes sense – added to the fact that Eaton has been used heavily in this series (almost as much as much publicized lead artist Tony Daniel) as a fill-in artist, and his own “main” issues have almost always had significant fill in work as well. Whether these artistic substitutions spring from time constraints or last minute script changes, the overall effect is passable, but disappointingly inconsistent. No really strong panels, splashes, or character moments shows up in all of Eaton’s work on this series, and this issue is no exception.

For the next two weeks, Tim Seeley returns for his final two issues of the series, and the covers indicate that they will be a brawl between Spyral’s assassin trainees and the Robins. Harper will likely have to fight against the Ichthys virus as well, since she’s not with the main group in their sound-proofed room, and she’s around the age limit that Tim speculates is Mother’s cutoff for the virus’s effect.

Batman’s biggest sin, hinted at since the first issue of this series, now appears to be that his game with Mother cost Harper her own parent. This revelation does make one wonder if Harper has further conditioning from Mother, and is the Bat-family’s hidden traitor that solicitations keep hinting exists.

While it provides some important backstory, and the character moments are competently handled, there’s still a sense that this issue is merely transitioning from one point of the story to the next, instead of providing as satisfying narrative on its own.