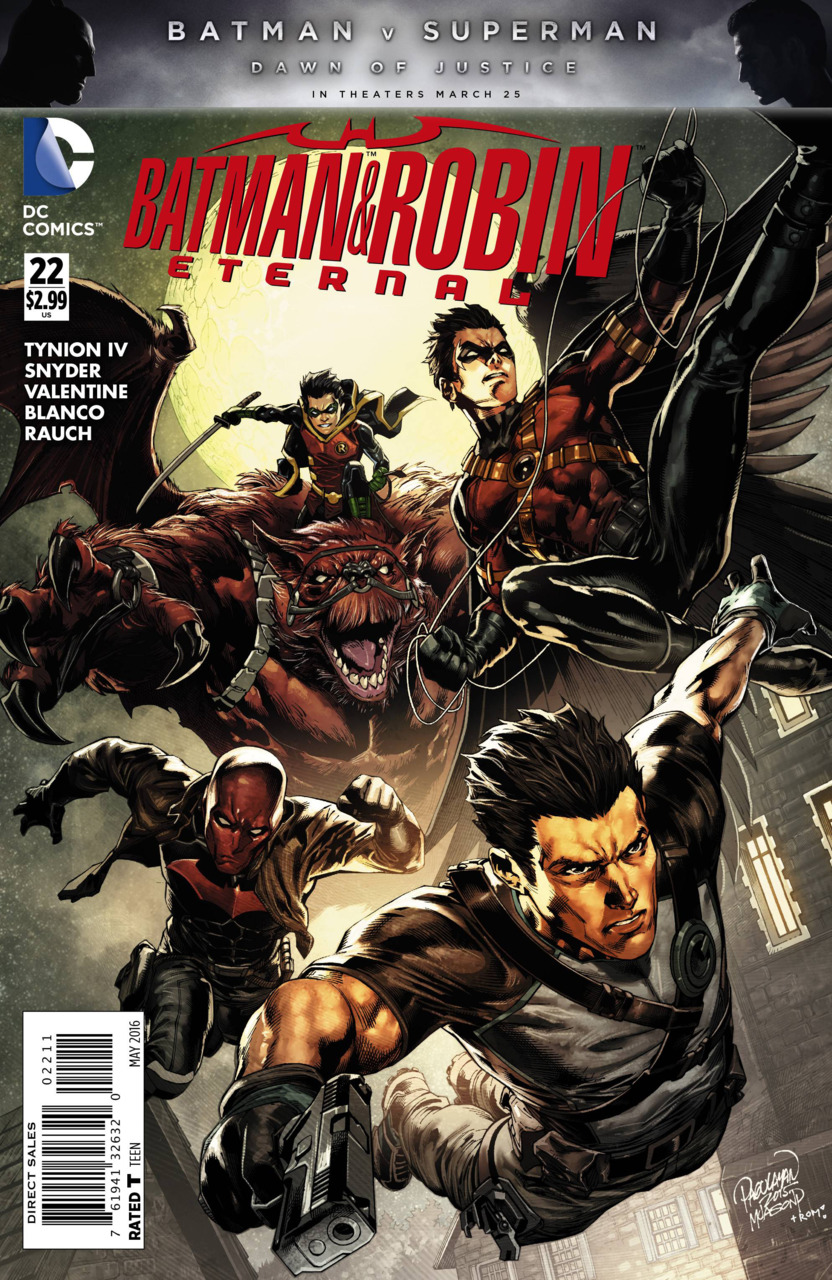 In Brief: The Robins regroup as the captured Harper Row and Cassandra Cain witness the start of Mother’s worldwide attack.

Summary (Spoilers): In the Arctic, Mother oversees the start of her attack on the world using the Ichthys broadcast mental virus, having just cheerfully killed one of her children for incompetence.

Poppy and Orphan (David Cain) are in transit from Spyral’s Headquarters in England to Mother’s base with Harper and Cassandra tied in the back. Back at Spyral, the newly arrived Damian Wayne (current Robin) observes Dick Grayson, Jason Todd (Red Hood), and Tim Drake (Red Robin) as they conclude that Orphan and his prisoners are out of their reach.

On the plane, Cass tries to get Harper’s attention, but Harper rebuffs her with icy despair. She remembers her mother, and says that she doesn’t hate Cassandra, but can’t forgive her. As they approach the icy lair, she seems to wish for death, but Cassandra promises that it will never happen.

Damian attempts to form a plan, but each of the other Robins shoots him down. Dick, Jason, and Tim all feel incredibly guilty at failing to stop Mother and letting Harper and Cass be captured, but Damian slaps Dick to snap them out of it. The others continue to believe that if Batman couldn’t defeat Mother, how could they? Damian provides the answer: Because Batman trained them to be better than him.

He reminds them of his own training with his father. When Damian couldn’t master Batman’s lessons, and compared himself to his three predecessors, he almost gave up. However, Batman told him that he rejects the idea of making soldiers. Instead of shaping them into who he wants, he has tried to let them become who they are – and surpass them because they know he trusts them and loves them all.

Galvanized by Damian’s speech, Dick forms a plan to find Mother’s hideout by tracking Orphan’s plane and monitor the satellites she will use to project the Ichthys virus worldwide.

Mother notices Dick’s plan beginning, but disregards it as too little, too late. Orphan arrives with his two captives in chains. Mother chides him for his treatment of her children, and when he begs for forgiveness, she comforts him, then slits his throat and tosses his body in the Arctic waters through a trapdoor.

As Harper and Cass look on in horror, Mother shows off her new Orphans, all wearing David Cain’s uniform. Taking a flute of champagne, Mother uses the cup to press the button launching the New World.

In Depth: Genevieve Valentine, writer for a year on Catwoman and previous scripter for issues #7 and 8 of this weekly, returns for the first part of her closing arc with a strong showing. While not nearly as showy as Tim Seeley’s final issue, this week’s offering provides careful scripting and solid art that sets up a moody, tense story.

Fernando Blanco also returns, providing several moments that complement Valentine’s sharp writing perfectly. His art is colder than Roge Antonio’s work two weeks ago, but no less engaging – there’s a chilly beauty to the credits splash page, having abandoned the “two people flying across the top” motif – just two panoramic panels, blue and red, with laconic, evocative captions capturing the despair of the moment.  The simple repeated panel structure of Cassandra attempting to reconnect with Harper, and the gorgeous reflection of Cass in the plane window set the despairing, knife-edged emotional tone.

The character designs also shine – Mother’s maniac control, Cassandra and Harper’s defeat, and the four Robins and their uniforms all stand out in clean, crisp renderings. We also see Mother’s Arctic base for the first time since the brief glimpse Tony Daniel showed in the 8-page preview. The triangular structure hints at the exciting confrontation to come, in a James Bond villain kind of exotic, impractical but awesome way.

Even beyond the razor-edged dialogue (much better balanced than Valentine’s previous arc, where it too often fell into gratuitous nastiness between heroic characters) demonstrates the kind of careful construction we expect from a James Tynion-led effort. Just as the motif of the hug winds its way through the emotional journey of issue #13, so a couple of moments repeat themselves here for very effective emotional impact. Batman’s injunction to Damian in the flashback of training about sacrificing footing only for an attack you’re willing to die to accomplish appears in Dick’s mouth in the present, showing the consistency of Bruce’s vision of preserving your life until it’s worth giving up for something greater. Damian’s speech to the other Robins, though decried by some fans, is a powerful one, reminding us that even though Batman often fails, it’s his ideals and the ideal he represents – never giving up fighting evil and trying to bring harmony to Gotham City – that make him the hero beloved by so many.

One last note – I find it kind of funny, but also kind of sad, that just as Cluemaster was unceremoniously killed by throat-slitting in the first Eternal series, so here the main female character reintroduced, this time Cassandra Cain, loses her father to the bigger Bad by the same action. While both deaths were satisfactory and necessitated by the story structure chosen by the writing team (Batman’s identity revealed, David Cain’s total sadism and lack of care for his daughter), it does make me worry about Cassandra’s future (even putting aside the complete question mark of Rebirth). Stephanie Brown has struggled to find a home without the continued narrative urgency of a living supervillain father in the year following the end of Eternal, and Cassandra will likely have the same problem in the year to come unless someone is smart enough to write her next story.

Pick up/Pass? Valentine and Blanco have crafted an excellent story that is well worth picking up.

In Conclusion: Valentine sets up the end of her arc with dark poetry, portraying the connection between the Robins and the depravity of Mother.